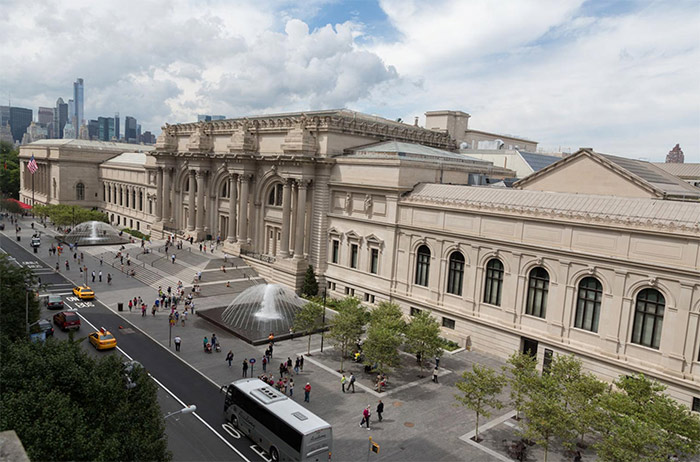 Highlights include an examination of art in 19th-century Denmark, a new commission by Lauren Halsey for The Met’s Cantor Roof Garden, a highly anticipated Karl Lagerfeld exhibition, and an unprecedented look at Vincent van Gogh paintings

(New York, December 7, 2022)—The Metropolitan Museum of Art has announced its upcoming exhibition program for the first half of 2023. The lineup features a wide array of shows—from monographic presentations to thematic surveys—and works of art from across time and around the world.

"The Metropolitan Museum of Art’s upcoming season of exhibitions is exceptionally robust and ambitious,” said Max Hollein, Marina Kellen French Director of The Met. “It is exhilarating to present such an extraordinary range of compelling shows that reflect the depth and diversity of creativity and the human experience."

Highlights of The Met's winter exhibitions include Richard Avedon: MURALS (opening January 19), which will celebrate the centennial of Avedon's birth with the presentation of three monumental group portrait photomurals by the artist; Beyond the Light: Identity and Place in Nineteenth-Century Danish Art (opening January 26), which will examine Danish artists' depiction of place, identity, and belonging and what it meant to travel and return home in a post-Napoleonic Denmark; a presentation of the work of American photographer Berenice Abbott (1898–1991), Berenice Abbott's New York Album, 1929 (opening March 2), that will spotlight a unique unbound album of black-and-white photographs of New York City, shedding light on the creative process of one of the great artists of the 20th century; and Rich Man, Poor Man: Art, Class, and Commerce in a Late Medieval Town (opening March 6 at The Met Cloisters), an exploration of the role of the home in early Tudor England that offers a case study of the intersection of art and class in an English city at its most prosperous moment.

Kicking off the spring exhibitions, Juan de Pareja, Afro-Hispanic Painter (opening April 3) will offer an unprecedented look at the life and artistic achievements of Juan de Pareja (ca. 1608–1670), largely known today as the subject of The Met’s iconic portrait by Diego Velázquez and who was enslaved in Velázquez’s studio for more than two decades before becoming an artist in his own right. Cecily Brown: Death and the Maid (opening April 4) marks the first full-breadth museum survey in New York of this internationally acclaimed artist. The tightly themed show unites some 50 paintings, drawings, sketchbooks, and monotypes from across Brown's career—many never before seen in New York and several recently completed. Anxiety and Hope in Japanese Art (opening April 8) will focus on human stories in and around art and art making. The Roof Garden Commission: Lauren Halsey (opening April 18) will present a full-scale architectural structure inspired by sources as varied as ancient Egyptian symbolism, 1960s utopian architecture, and contemporary visual expressions such as tagging. The posthumous exhibition Karl Lagerfeld: A Line of Beauty (opening May 5) will spotlight the German fashion designer’s unique working methodology and examine his stylistic vocabulary through the aesthetic themes that recurred in his work during his time at Chanel, Fendi, his eponymous brand, Karl Lagerfeld, and more.

Furthermore, a groundbreaking exhibition of some 40 works by Vincent van Gogh (1853–1890) will be on view at The Met Fifth Avenue from May 22 through August 27, 2023. Van Gogh's Cypresses will be the first show to focus on the unique vision the artist brought to bear on the towering trees—among the most famous in the history of art—affording an unprecedented perspective on a motif virtually synonymous with Van Gogh's fiercely original power of expression.

Additionally, the Museum presented highlights of its upcoming season of MetLiveArts performances, including a series of in-gallery activations by 2022–23 Quartet in Residence: Catalyst Quartet, who will collaborate with several prominent New York City artists to redefine, reimagine, and recontextualize the classical music experience. The performance season will be the first following a recent news of a major gift from Adrienne Arsht, who pledged $10 million in support of the MetLiveArts performance series and resilience programming, the largest single gift to the Museum’s Department of Live Arts.

Further updates on a series of major renovation projects that are underway and are the focus of a new Perspectives article on the Museum’s website by Jhae Hernandez-Eli, The Met’s Vice President for Construction.

Upcoming Education initiatives will provide audiences with new opportunities to engage with the Museum’s collection of 5,000 years of art. These include interactive programs for students and families as well as cultural celebrations such as a Lunar New Year event featuring a performance by the Lion Troupe from the Chinese Center on Long Island (January 21) and the return of the popular Teens Take The Met! event (May 12).

In additional news, The Met's President and CEO Daniel H. Weiss has recently published a new book. In Why the Museum Matters (Yale University Press) Weiss contemplates the idea of the universal art museum alongside broad considerations about the role of art in society and what defines a cultural experience.