MetCollects is an online feature that highlights works of art new to the Museum's collection through the fresh eyes of photographers and the enthusiastic voices of leading scholars and artists. Discover a new work each month. 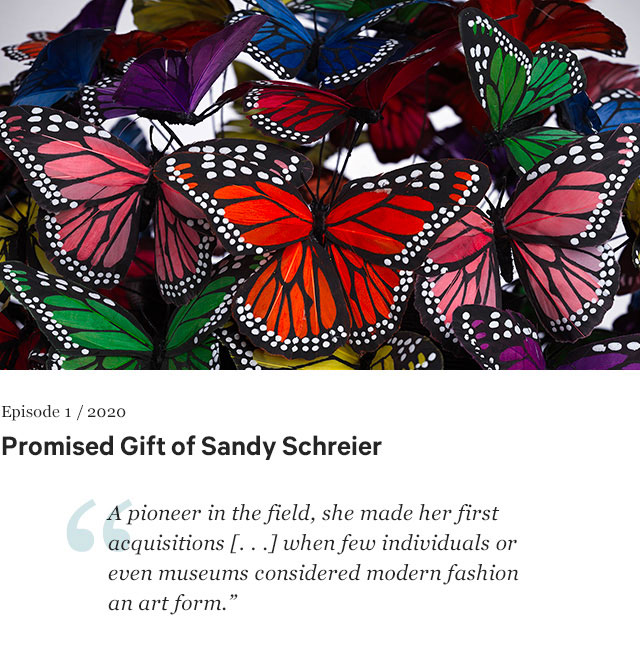 The remarkable collection of Sandy Schreier is one of the finest holdings of twentieth-century fashion in private hands and one of the few amassed not as a wardrobe, but as an art collection. Sandy Schreier's fascination with fashion began during childhood, and her collecting would become a lifelong, passionate endeavor. As a pioneer in the field, she made her first acquisitions in the mid-twentieth century, when few individuals or even museums considered modern fashion an art form. Over several decades she built a collection of fashion masterworks, objects that are superb expressions of their respective eras, and that reflect the singular contributions of the century's most innovative designers.

In 2018, The Costume Institute's curators had the privilege of identifying pieces from this collection that would best complement the Met's holdings; these selections now form an extraordinary promised gift of 165 works given in honor of the Museum's 150th anniversary.

This gift will profoundly enrich The Costume Institute's collection, introducing outstanding designs by fashion houses that are rarely represented in museums. An early-1920s Egyptian-inspired evening dress will be the first example in The Met collection by Madeleine & Madeleine, a short-lived French couture house known for its sumptuous fabrics and rich embroideries. An equally rare gown of about 1913, embellished with delicate metallic lace and intricate beading, reveals the skilled workmanship of the often-overlooked but influential Maison Margaine-Lacroix. The gift also builds on existing areas of focus for the department, notably mid-twentieth century French couture and American ready-to-wear, early twentieth-century Italian design, as well as accessories. These collecting strengths are represented here in designs by Jean Dessès, Gilbert Adrian, Mariano Fortuny, and Philip Treacy. Dessès's ball gown of expertly draped chiffon captures the exuberant spirit and technical virtuosity of post-war haute couture. Adrian's skilled tailoring and playful sense of humor are evident in an ensemble that features a whimsical print depicting a pair of impish kittens. Fortuny's signature printing technique, which imitates the appearance of Italian Renaissance velvets, is showcased in a striking velvet coat. Treacy's imaginative approach to millinery is exemplified by a headpiece adorned with a swarm of butterflies formed from hand-painted feathers.

These selections, along with other highlights on display in the exhibition In Pursuit of Fashion: The Sandy Schreier Collection until May 17, 2020, express the extraordinary vision of a lifelong collector, and her desire to inspire broader appreciation of fashion by sharing her collection with museum visitors.