The Met to Present a Reimagined Period Room Powered by Afrofuturism, Dynamically Combining the Past, Present, and Future 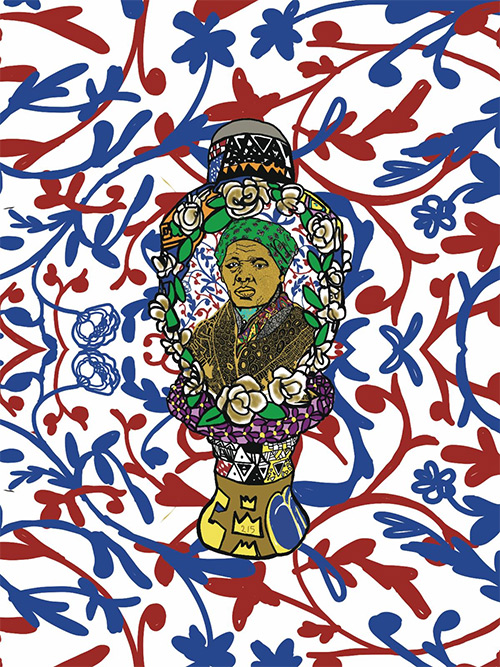 On November 5, The Met will unveil a long-term installation, Before Yesterday We Could Fly: An Afrofuturist Period Room, that transforms a 19th-century domestic interior into a space untethered by time. Like traditional period rooms, the installation is a fabrication of a domestic space that assembles furnishings and works of art to represent a fixed moment in time. However, this new space will unsettle the very idea of a period room by embracing the African and African diasporic belief that the past, present, and future are interconnected. Powered by Afrofuturism—the inspirational, creative mode that centers Black imagination and self-determination—this speculative home is activated through vision, sound, and storytelling. Before Yesterday We Could Fly is furnished with a range of works from The Met collection—from Bamileke beadwork and 19th-century American ceramics to contemporary art and design—that foreground generations of Black creativity. The period room is significantly located at a central intersection where galleries for Early Modern Europe, Nineteenth-century Britain, and the American Wing meet—a placement that alludes to the linked colonial histories embedded in the Afrofuturist Period Room.

The exhibition is made possible by the Hobson/Lucas Family Foundation and the Director’s Fund.

Additional support is provided by Art Mentor Foundation Lucerne and the Terra Foundation for American Art.

“The Met’s distinguished collection of period rooms present not only outstanding objects and displays, but also complex relationships towards history and authenticity that call for reinterpretation and intervention. As the first to present a constructed space of now and tomorrow rather than a filtered perspective on the past, the Afrofuturist Period Room offers an important opportunity to start new dialogues and illuminate stories that are yet to be told within our walls,” said Max Hollein, the Museum’s Marina Kellen French Director. “The many collaborations with contemporary artists, new acquisitions, and works commissioned specifically for this project will have a lasting impact on The Met’s collection, expanding our holdings of contemporary decorative art, and demonstrating the Museum’s continued commitment to engaging with and supporting extraordinary artists of our time.”

Lead Curator and Designer Hannah Beachler stated, “This project is important to me because it is a necessary conversation with time, loss, community, and hope.”

Co-curator Sarah E. Lawrence, Iris and B. Gerald Cantor Curator in Charge of the Department of European Sculpture and Decorative Arts at The Met, commented, “I arrived at The Met in the spring of 2019 with a particular interest in the Museum's period rooms. This project presented itself as an exciting opportunity to push the boundaries of what a period room can be. Every period room is predicated on the fiction of authenticity. Using this fiction as our starting point, how could we imagine the domestic spaces of individuals previously omitted from our period rooms?”

Ian Alteveer, co-curator and Aaron I. Fleischman Curator in The Met’s Department of Modern and Contemporary Art, added, “How do we view a history that is difficult to see? To represent the lived experience of so many African American communities that have faced centuries of destruction in this country—whether through real violence, as in Greenwood, Tulsa, in 1921, or through the seemingly less bloody but equally disruptive incursion of eminent domain in so many other cities—is a task perfectly suited to Afrofuturism’s visionary collapsing of past, present, and future.”

Consulting Curator Dr. Michelle Commander agreed that the period room “celebrates the ingenuity, artistry, and determination of people of African descent and reconfigures how we think about space, place, and time.”

The exhibition's narrative is generated by the real, lived history of Seneca Village, a vibrant community founded by free Black tenants and landowners that flourished from the 1820s to the 1850s in New York City’s Manhattan, just a few hundred yards west of The Met's location at 82nd Street and Fifth Avenue. Seneca Village’s roots date from 1825, when two African American entrepreneurs, Andrew Williams and Epiphany Davis, joined with the AME Zion Church to purchase parcels of land between West 83rd and West 89th Streets, just east of what is now Central Park West. The community flourished over the following decades, and by 1850, the neighborhood comprised some 50 homes, 3 churches, cemeteries, and a school. African Americans formed the vast majority of the residents, at least half of whom owned their homes. As with so many other independent African American communities throughout the United States in the 19th and 20th centuries, Seneca Village’s prosperity was short-lived. In 1857, the City of New York destroyed Seneca Village, using eminent domain to seize land for the construction of Central Park and make way for a different type of place, one intended for a wholly different community.

Dr. Commander continued, “The untold story of Seneca Village underscores that we walk on hallowed ground right here in New York City. Aspects of our history often fall out of conversation because of the passage of time. In other cases, they have been effectively buried or intentionally silenced. When these significant histories resurface, we ought to show reverence for those who came before whose lives and sacrifices paved the way for our very being. In this period room, archival and archaeological truths meet a range of art from across several centuries, cultures, and geographies. With the guidance of informed speculation, we imagine what was, what might have been, and what is yet to be.”

Acknowledging the injustice of Seneca’s destruction, the exhibition asks: What if this community had the opportunity to grow and thrive? Powered by Afrofuturism—the interdisciplinary artistic mode that arose in the middle of the 20th century and centers Black imagination and self-determination—the exhibition transforms a 19th-century domestic interior into a speculative future home for Seneca Village residents whose time there was so unjustly cut short.

Similarly, the title, Before Yesterday We Could Fly, evokes the project’s speculative narrative. It is inspired by Virginia Hamilton's legendary retelling of the Flying African tale, which celebrates the imagination of enslaved peoples, creative uses of flight, and the significance of spirituality and mysticism to Black communities in the midst of great uncertainty.

The space was conceived and designed by Lead Curator and Designer Hannah Beachler in collaboration with Fabiana Weinberg, Senior Exhibition Designer on The Met’s Design team. Best known for her work on the film Black Panther and Beyoncé’s video Lemonade, Beachler has imagined a wood-framed 19th-century home as an open space split between a prosperous, industrious past, with the kitchen and its hearth as its culturally resonant and inventive center, and a utopian future present in the living room. Inspired by the artifacts of Seneca Village found during the excavations led by Columbia University’s Seneca Village Project in 2011, the kitchen evokes the community through its structure and the historical objects on display. Works from The Met’s American Wing reference the pot sherds and remnants of domestic objects found during the dig. They are interspersed with complementary works of art and design from the Department of Modern and Contemporary Art to create a space that looks to the future with the past always in mind.

Re-interpreting aspects of this past in a futuristic aesthetic, the living room displays contemporary furniture, photography, and ceramics alongside works from The Met’s Michael C. Rockefeller Wing. The display asks: If the imagined occupants of this house acquired works of art from across space and time, what would they choose? The works on view, placed in this speculative space as an exercise in future world-building, represent only one of countless possible answers to this question.

Before Yesterday We Could Fly also celebrates a number of new acquisitions made specifically for the project, including works by Ini Archibong, Cyrus Kabiru, Roberto Lugo, Zizipho Poswa, and Tourmaline, and is animated by exciting commissions from Njideka Akunyili Crosby, Fabiola Jean-Louis, and Jenn Nkiru. Outside the structure, the gallery walls will be wrapped with a design by Njideka Akunyili Crosby that transports viewers into an environment unlike any other space in the museum.

Before Yesterday We Could Fly: An Afrofuturist Period Room is a curatorial collaboration led by Hannah Beachler, Lead Curator and Designer, and Dr. Michelle Commander, Consulting Curator and Associate Director and Curator of the Lapidus Center for the Historical Analysis of Transatlantic Slavery at New York Public Library’s Schomburg Center for Research in Black Culture, with The Met’s Sarah E. Lawrence, Iris and B. Gerald Cantor Curator in Charge of the Department of European Sculpture and Decorative Arts, and Ian Alteveer, Aaron I. Fleischman Curator, Department of Modern and Contemporary Art, assisted by Ana Matisse Donefer-Hickie, Research Associate in the Department of European Sculpture and Decorative Arts.

In keeping with the collaborative ethos of Afrofuturist creative practice, The Met team has engaged an array of creative and intellectual partners in the realization of this project. A convening in October 2020 gathered artists, curators, filmmakers, and scholars to discuss the process and project of the period room. In January 2021, the curatorial team invited The Met community to add their voices to the project, bringing insights from multiple perspectives across the Museum.

The Metropolitan Museum of Art Bulletin, a quarterly publication, will devote the February 2022 issue to the project. Beginning with an introduction by Hannah Beachler, Sarah E. Lawrence, and Ian Alteveer, the Bulletin will feature a graphic novella by John Jennings, graphic novelist and Professor of Culture and Media at the University of California, Riverside, that animates the objects on display in the period room. An historical essay by Dr. Michelle Commander follows.

The Met’s quarterly Bulletin program is supported in part by the Lila Acheson Wallace Fund for The Metropolitan Museum of Art, established by the cofounder of Reader’s Digest.

A robust slate of education programs and digital offerings will also accompany the installation, including programs specifically designed for teens and families; multisensory programs for visitors with disabilities; and a collaboration with Carnegie Hall’s upcoming winter 2021–22 Afrofuturist Music Festival. Details on additional programs and digital features will be made available in the coming months.