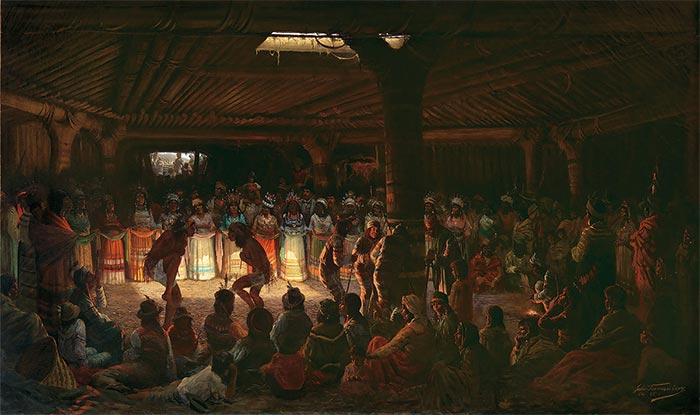 Opening August 16, 2021, at The Metropolitan Museum of Art, the exhibition Jules Tavernier and the Elem Pomo explores the intercultural exchange between American artist Jules Tavernier (1844–1889), born and trained in France, and the Indigenous Pomo community of Elem at Clear Lake in northern California. Investigating Tavernier’s life and career, the exhibition is centered on his rediscovered masterwork, Dance in a Subterranean Roundhouse at Clear Lake, California (1878), which depicts the mfom Xe, or “people dance,” of the Elem Pomo in an underground roundhouse.

The exhibition brings together approximately 60 works by a range of artists—paintings, prints, watercolors, and photographs—to tell the story of Tavernier’s travels through Nebraska, Wyoming, California, and the Hawaiian Islands. These works will be shown alongside a choice selection of historical and contemporary Pomo basketry and regalia to celebrate the cultural sovereignty of the Pomo peoples and highlight their continued cultural presence.

The exhibition is made possible by Jan and Warren Adelson and The Mr. and Mrs. Raymond J. Horowitz Foundation for the Arts.

It is organized by The Metropolitan Museum of Art and the Fine Arts Museums of San Francisco.

Max Hollein, the Marina Kellen French Director of The Met said, “This exhibition puts Tavernier’s masterpiece in dialogue with extraordinary works by Pomo makers. Enriched by the art and stories of contemporary Native communities, the presentation amplifies Indigenous voices and histories, drawing connections between Euro-American and Indigenous artists, past and present, developing a more inclusive history of American art.”

Dance in a Subterranean Roundhouse at Clear Lake, California was commissioned by San Francisco’s leading banker, Tiburcio Parrott, as a gift for his Parisian business partner, Baron Edmond de Rothschild. Tavernier’s work celebrates the rich vitality of Elem Pomo culture, while also exposing the threat posed by White settlers, including Parrot, who was then operating a toxic mercury mine on the community’s homelands. Designated a Superfund site by the Environmental Protection Agency in 1990, the mine continues to negatively impact the lives of the sovereign people of the present-day Elem Indian Colony.

The rediscovery of Tavernier’s painting in recent times has inspired this new analysis of the artist’s career. Born and trained in France, Tavernier took life-drawing classes and exhibited his paintings at the Paris Salon in the 1860s. He left London and arrived in New York in August 1871, initially showcasing his skills as an illustrator with scenes of daily life and the American wilderness. Following the opening of the Transcontinental Railroad in 1869, the American public clamored for images of the West. Tavernier’s talent was recognized by Harper’s Weekly, who hired him to travel across the country. Examples of the resulting watercolor sketches, prints, and large-scale oil paintings are featured in the exhibition, including those inspired by his wide-ranging travels through Nebraska, Wyoming, California, and the Hawaiian Islands. 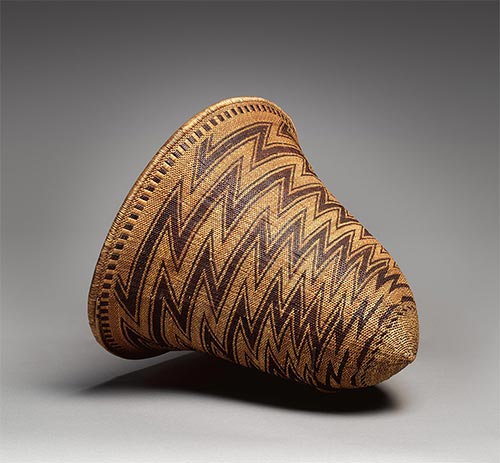 When Tavernier arrived in California in 1874, Indigenous Pomo peoples had for decades suffered the catastrophic consequences of White settlement, including genocidal violence, disease, land theft, forced relocation, environmental degradation, and cultural transformation. Yet in the face of devastating colonialism, Pomo communities developed strategies of resistance and endurance that persist today. Their innovation and adaptation are evident in their basketry—the art form for which the Pomo peoples are best known. Selected in close consultation with exhibition collaborator Sherrie Smith-Ferri (Dry Creek Pomo/Bodega Miwok), the baskets featured in the exhibition reveal the breadth of Pomo weaving techniques, forms, and materials, as well as their makers’ intimate knowledge of plants and animals. A selection of contemporary baskets by renowned weaver Clint McKay (Dry Creek Pomo/Wappo/Wintun) highlight the ongoing cultural significance of basket making today.

Jules Tavernier and the Elem Pomo is the second in a series of displays in a section of the American Wing’s Erving and Joyce Wolf Gallery that respond to the dynamic long-term installation Art of Native America: The Charles and Valerie Diker Collection. Debuting in that gallery in 2018, Art of Native America now features ongoing rotations of Indigenous American work—historical, modern, and contemporary.

The exhibition is co-curated by Elizabeth Kornhauser, Alice Pratt Brown Curator of American Paintings and Sculpture, and Shannon Vittoria, Senior Research Associate for American Painting and Sculpture, both at The Met, in partnership with Christina Hellmich, Curator in Charge, Arts of Africa, Oceania, and the Americas, at the de Young Museum. It is presented in collaboration with Elem Pomo cultural leader and regalia maker Robert Geary and Dry Creek Pomo/Bodega Miwok scholar Sherrie Smith-Ferri, PhD.

Following its presentation at The Met, the exhibition will travel to the Fine Arts Museums of San Francisco, de Young Museum from December 18, 2021 through April 17, 2022.

The exhibition is accompanied by an issue of The Metropolitan Museum of Art Bulletin with essays by Robert Geary, Elizabeth Kornhauser, and Shannon Vittoria. A video produced by the de Young Museum and The Grange, featuring interviews with Robert Geary, Sherrie Smith-Ferri, and Eastern Pomo artist and curator Meyo Marrufo, will be screened both in the gallery and online.

The Bulletin is made possible by the William Cullen Bryant Fellows of The Metropolitan Museum of Art.

The Met's quarterly Bulletin program is supported in part by the Lila Acheson Wallace Fund for The Metropolitan Museum of Art, established by the cofounder of Reader's Digest.

During the run of the exhibition, The Met will host virtual public programs featuring Pomo collaborators, scholars, and artists. These related education programs are made possible by the Clara Lloyd-Smith Weber Fund and Barry Appleton.

During the run of the exhibition, The Met will host virtual public programs featuring Pomo collaborators, scholars, and artists. These related education programs are underwritten by the Clara Lloyd-Smith Weber Fund and Barry Appleton.