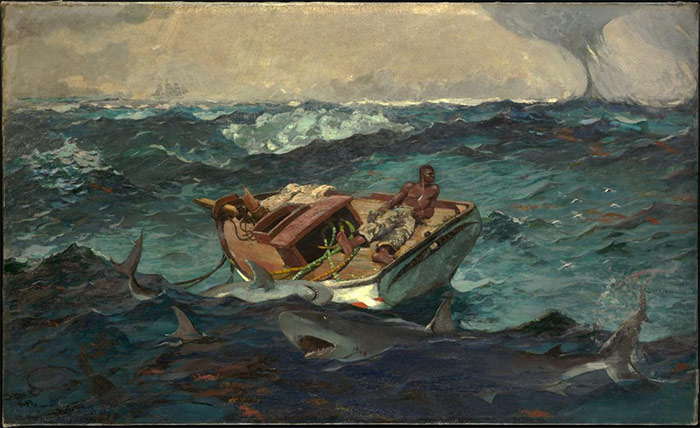 Renowned for his powerful paintings of American life and scenery, Winslow Homer (1836–1910) remains a consequential figure whose art continues to appeal to broad audiences. Opening April 11, 2022, Winslow Homer: Crosscurrents will reconsider the artist's work through the lens of conflict, a theme that spans his prolific career. A persistent fascination with struggle permeates Homer's art—from emblematic images of the Civil War and Reconstruction that examine the effects of the conflict on the landscape, soldiers, and formerly enslaved people to dramatic scenes of rescue and hunting, as well as monumental seascapes and dazzling tropical works painted throughout the Atlantic world. The centerpiece of the exhibition will be The Met’s iconic The Gulf Stream, a painting that reveals Homer’s lifelong engagement with the charged subjects of race, geopolitics, and nature. Featuring 88 oils and watercolors, this major loan exhibition represents the largest critical overview of Homer’s art and life in more than a quarter of a century.

The exhibition is made possible by The Peter Jay Sharp Foundation.

Corporate sponsorship is provided by Bank of America.

Additional support is provided by the Barrie A. and Deedee Wigmore Foundation, the Terra Foundation for American Art, White & Case LLP, the Enterprise Holdings Endowment, and Ann M. Spruill and Daniel H. Cantwell.

This exhibition is supported by an indemnity from the Federal Council on the Arts and the Humanities.

It is organized by The Metropolitan Museum of Art and The National Gallery, London.

"Winslow Homer is one of the best known and most beloved American artists," said Max Hollein, the Museum's Marina Kellen French Director. "By focusing on the theme of conflict across his art, this exhibition will raise timely questions about his significance and appeal, encouraging a fresh understanding of his deeply thoughtful approach to depicting complex social and political issues of his era—many of which remain pertinent today."

Sylvia Yount, exhibition co-curator and the Lawrence A. Fleischman Curator in Charge of the American Wing, said, "This exhibition will foreground Homer's potent oil and watercolor paintings of the Atlantic world against his wider oeuvre, challenging the popular conception of him as the 'Yankee' realist who painted mostly Northeastern subjects. In doing so, we hope to encourage a more nuanced interpretation of his overall production, sophisticated artistry, and keen ability to distill complicated issues."

Stephanie L. Herdrich, exhibition co-curator and Associate Curator of American Painting and Sculpture, added, "This focused examination of Homer's brilliant career will highlight his continuing relevance in his explor­ation of universal themes, including human beings’ struggle with one another, with nature, and with mortality. We look forward to introducing Homer to a new generation as we ask fresh questions about his art."

The exhibition will open by situating Homer's work in the Atlantic world, a diasporic concept linked to the geo­graphical region along the Gulf Stream from the Caribbean up the East Coast of the United States and across the ocean to Great Britain. Upon entering the galleries, visitors will immediately glimpse the painting that inspired the exhibition—The Gulf Stream (1899, reworked by 1906; The Met)—through a window that opens into another gallery. The installation then unfolds in thematic and chronological sections that explore the idea of conflict in Homer's art.

The first section, "War and Reconstruction," will establish the theme of conflict as fundamental to Homer's art since the start of his professional career, when he worked as a "special artist" documenting the American Civil War (1861–65) for Harper's Weekly. Homer probed the war's emotional and physical impact on the soldiers and landscape in a haunting series of paintings—from Sharpshooter (1863; Portland Museum of Art), his first important oil, to Prisoners from the Front (1866; The Met). Homer's subsequent depictions of Reconstruction-era Virginia suggest his concern with racial struggle and its uncertain outcomes. Among his arresting portrayals of newly emancipated Black Virginians is Dressing for the Carnival (1877; The Met), one of several works that have undergone conservation for the exhibition, revealing new information about Homer’s artistic process.

After the war, while maintaining a studio in New York City, Homer followed travelers to resorts throughout the northeastern United States, where many sought the restorative power of nature to assuage the pain of war and as an antidote to rapid urbanization. The exhibition’s second section will present Homer’s early images of the seashore as a site of both leisure and labor during this time, while also revealing his burgeoning engagement with watercolor. On view will be his widely celebrated Breezing Up (1873–1876; National Gallery of Art, Washington, D.C.), an optimistic oil painting of men and boys at sea—a theme that would become a leitmotif for Homer. Other works depict children at play near the shore, such as A Basket of Clams (1873; The Met) and How Many Eggs? (1873; Karen and Kevin Kennedy). These seemingly lighthearted images intimate darker themes, foreshadowing the artist's later seascapes depicting the dangers of maritime life.

In 1881, Homer traveled across the Atlantic and spent a transformative 19 months in England. He resided mainly in the North Sea fishing community of Cullercoats, where he produced a number of dramatic paintings and watercolors inspired by the locals' sustaining ties to the ocean. Upon returning to New York, Homer infused his art with a newfound gravitas, painting harrowing episodes at sea. The third section of the exhibition will focus on the theme of rescue as seen in works like The Life Line (1884; Philadelphia Museum of Art) and Undertow (1886; Clark Art Institute). These as well as his depictions of laboring fishermen in the North Atlantic, such as The Fog Warning (1885; Museum of Fine Arts, Boston), reveal Homer's interest in the gender and class dimensions of ocean perils, modern heroism, and human vulnerability in the face of nature's dynamism.

The next section will showcase Homer's watercolors of tropical destinations, including the Bahamas, Cuba, Florida, and Bermuda, where he often traveled to escape the harsh winters at his home in Prouts Neck, Maine. Contemporary critics often dismissed these watercolors as simple touristic souvenirs, but the exhibition will highlight the significance of these works, which hint at complicated histories, geopolitics, imperial landscapes, and the threat of nature. For example, A Garden in Nassau (1885; Terra Foundation for American Art) suggests the exclusion of Black islanders from aspects of Bahamian society, while the aftermath of inclement weather in After the Hurricane, Bahamas (1899; The Art Institute of Chicago) diverges from traditional images of an idyllic tropical setting.

Homer's travels to the Bahamas and Cuba inspired The Gulf Stream, a monumental scene of conflict between humankind and nature. It is considered among Homer's most consequential works and is notably one of his first paintings to enter The Met collection. The ambitious oil depicts a lone Black seaman confronting devastating obstacles from the deck of a small, dismasted boat, threatened by sharks and a waterspout along the powerful Atlantic current. Interpreted by some as Homer’s rumination on mortality after the death of his father, The Gulf Stream also alludes to the legacies of slavery and American imperialism as well as more universal concerns about the fragility of human life and the dominance of nature. A section of the exhibition devoted to the development of this important painting—a process that took place over more than 20 years—will include a rare graphite sketch acquired by The Met in 2016 in addition to several related watercolors.

In the 1890s, after a decade of living nearly year-round in Prouts Neck, Homer recommitted himself to oil painting, choosing his studio view of the coastal rocks and turbulent ocean as his main subject. The “Late Seascapes” section will consider these epic paintings in which Homer used increasingly bold brushwork to capture the changing mood and motion of the ocean. Many of these works, like Northeaster (1895, reworked 1901; The Met) and Early Morning after a Storm at Sea (1900/1903; The Cleveland Museum of Art), focus exclusively on the physical environment.

The themes of conflict, struggle, and survival that can be traced across Homer's artistic career culminated in a series of works produced during the final decade of his life. A section titled "Mortality" will feature these dramatic late works—from a hazardous family adventure in Shooting the Rapids, Saguenay River (1905–10; The Met) to a scene of Darwinian struggle in Fox Hunt (1893; Pennsylvania Academy of the Fine Arts) and a hunter's deadly aim in Right and Left (1909; National Gallery of Art, Washington, D.C.). The exhibition will conclude by emphasizing the importance of watercolors to Homer's legacy, examining how the medium offered him an intimate scale and fluid technique in which to explore the profound themes that preoccupied him throughout his life.