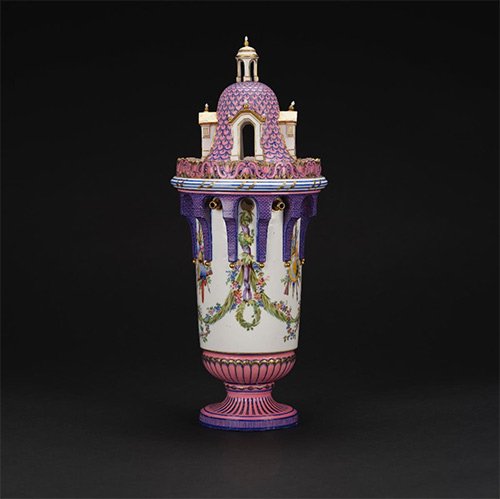 Inspiring Walt Disney: The Animation of French Decorative Arts will be the first-ever exhibition at The Met to explore the work of Walt Disney Animation Studios’ hand-drawn animation. Opening December 10, it will draw new parallels between the magical creations of the Disney Studios and their artistic models, examining Walt Disney’s personal fascination with European art and the use of French motifs in Disney films and theme parks.

Sixty works of 18th-century European decorative arts and design—from tapestries and furniture to Boulle clocks and Sèvres porcelain—will be featured alongside 150 production artworks and works on paper from the Walt Disney Animation Research Library, Walt Disney Archives, Walt Disney Imagineering Collection, and The Walt Disney Family Museum. Selected film footage illustrating the extraordinary technological and artistic developments of the studios during Walt Disney’s lifetime and beyond will also be shown. The exhibition will highlight references to European visual culture in Disney animated films, including nods to Gothic Revival architecture in Cinderella (1950), medieval influences on Sleeping Beauty (1959), and Rococo-inspired objects brought to life in Beauty and the Beast (1991). The exhibition marks the 30th anniversary of Beauty and the Beast’s animated theatrical release.

It is organized by The Metropolitan Museum of Art and The Wallace Collection in London, where the exhibition will open in spring 2022.

“Both Disney animated films and Rococo decorative works of art are infused with elements of playful storytelling, delight, and wonder,” said Max Hollein, Marina Kellen French Director of The Met. “Eighteenth-century craftspeople and 20th-century animators alike sought to ignite feelings of excitement, awe, and marvel in their respective audiences. Through exquisite objects and Disney artifacts, this exhibition will provide an unprecedented look at the impact of French art on Disney Studios productions from the 1930s to almost the present day.”

Wolf Burchard, the exhibition’s curator, added: “In mounting The Met’s first-ever exhibition devoted to Walt Disney and his studios’ oeuvre, it was important for us to explore his sources of inspiration as well as to recognize that his studio’s animated interpretations of European fairytales have become a lens through which many view Western art and culture today. Our fresh look on this material, which prompts an effervescent dialogue between the drawings and illustrations of some of the most talented artists in the Walt Disney Animation Studios and a rich array of the finest 18th-century furniture and porcelain, brings to life the humor, wit, and ingenuity of French Rococo decorative arts.”

Sarah Lawrence, Iris and B. Gerald Cantor Curator in Charge of the Department of European Sculpture and Decorative Arts, shared, “Burchard brings a wholly original response to his subject, one that enriches our appreciation of Disney’s art of animation and enlivens our delight in the decorative arts of 18th-century France. The genius of Walt Disney and his studio was to have intuited the animation implicit in these ornate furnishings and then to discover a technology that brings those objects to life.”

The exhibition will be organized thematically and broadly chronologically, with the largest section devoted to Disney’s most Rococo film, Beauty and the Beast (1991), well known for featuring inanimate objects coming to life.

Walt Disney (1901–1966) had a personal relationship with France, and following a brief overview of that history, the exhibition will highlight his encounters with European art and architecture during his repeated visits to Western Europe. These gave him a profound source of inspiration from which he and his studios drew throughout his life. His travels also sparked his passion for collecting and building miniature furniture and dollhouse contents, mirroring the kind of creativity he would exercise in overseeing the creation of new “worlds” through his theme parks and films. A selection of these mini objects will be displayed alongside personal film footage of Disney and his family visiting Paris and Versailles.

The next section will explore the concept of “Animating the Inanimate” through a presentation of French and German Rococo porcelain figurines alongside story sketches for two of Disney’s “Silly Symphonies”: The Clock Store (1931) and The China Shop (1934). These types of whimsical porcelain figures, originally inspired by the pastoral scenes of French Rococo painter Antoine Watteau and his contemporaries, were brought to life by the first generation of Disney animators. Connections will be made between the remarkable technological advancements of the Meissen and Sèvres porcelain manufactories over the course of the 18th century and the cinematic innovations pioneered by Disney animators at the beginning of the 20th.

The subsequent three sections will focus on three early animated features, beginning with Snow White and the Seven Dwarfs (1937), inspired by the Brothers Grimm fairytale. Included will be a gouache on celluloid depicting two avid-eyed vultures, from the film, which Walt Disney presented to The Met in 1938. His gift to the Museum was discussed extensively in the press at the time, with The New York Times Magazine asking the question, “It’s Disney, but is it art?” The distinctly Germanic atmosphere of Snow White and the Seven Dwarfs contrasts with the Francophile look of Cinderella (1950) and Sleeping Beauty (1959), both adapted from the original tales written at the dawn of the 18th century by Charles Perrault, the influential man of letters at the court of Louis XIV. The Cinderella section will spotlight the barrier-breaking female artists who entered the creative realm of the Disney Studios, including Bianca Majolie and Mary Blair. The latter’s bold and highly colorful style was the driving force behind the look of the studios’ feature films of the 1940s and early 1950s. The exhibition will then highlight the medieval sources that Disney artist Eyvind Earle and his colleagues consulted for the style of Sleeping Beauty. The Hunt of the Unicorn tapestries (1495–1505; also known as the Unicorn Tapestries)from The Met Cloisters’ collection are often credited for providing a starting point for the film’s visual development.

The next series of galleries will be devoted to Beauty and the Beast (1991), which Walt Disney himself had suggested for animation in the 1940s and 1950s. The famous tale was first published in 1740 by Suzanne-Gabrielle Barbot de Villeneuve, although a later, abridged adaptation (1756) by Jeanne-Marie Leprince de Beaumont is more widely known.  This expansive section will explore topics of anthropomorphism and zoomorphism in 18th-century French literature and decorative arts, Disney’s satirical take on Rococo fashion, the interiors of the movie’s enchanted castle, and the design and animation of the Beast and other characters. On view will be a touching, 16th-century portrait lent by Ambras Castle in Innsbruck, Austria, of Magdalena González, which has been associated with the story of Beauty and the Beast for generations. Young Magdalena was afflicted with a genetic condition causing the entirety of her body to be covered in unusual amounts of hair; her and her family’s story was one of alienation and oppression. Preparatory movie sketches shown alongside 18th-century clocks, candlesticks, and teapots (evoking the characters of Cogsworth, Lumiere, and Mrs. Potts from the movie) will illustrate the ways in which both Disney animators and Rococo craftspeople sought to breathe life into what is essentially inanimate. Highlights will include a clock on pedestal by André Charles Boulle, gilt-bronze candlesticks by Juste-Aurèle Meissonnier, and early Meissen teapots, including an anthropomorphic one of a bearded man riding a miniature dolphin, as well as a pair of Sèvres elephant vases designed by Jean-Claude Chambellan Duplessis. Particular focus will be given to Beast’s transformation scene, animated by Glen Keane and inspired by sculptor Auguste Rodin’s The Burghers of Calais, as well as the ballroom scene, whose vast architectural backdrop drew on the Hall of Mirrors at Versailles. Finally, a “Be Our Guest” display will evoke the ways in which glittering silver and porcelain buffets were part of the festivities at Versailles and other European courts.

The concluding section will examine Disney architecture, specifically the fairytale castles that are central focal points in many Disney movies and theme parks. While the fantastical buildings exist outside actual periods and styles, Disney’s artists were heavily influenced by French and German architecture when creating their settings, particularly for amusement parks. A presentation of Walt Disney Imagineering concept art will illustrate these Disney architectural designs and historical comparisons—such as the 16th-century Loire Valley chateaux and the 19th-century Neuschwanstein Castle in Bavaria. The centerpiece of this section will be the first bird’s eye view of Disneyland, famously drawn up by Herbert Ryman under Walt Disney’s guidance over one weekend in the fall of 1953, as well as the only two pairs of so-called Tower vases, made by Sèvres around 1762–63 and likely to be reunited for the first time in history. These vases, like Disney’s castles, were designed to encourage their beholders to let their imagination run free.

The exhibitionis organized by Wolf Burchard, Associate Curator in The Met’s Department of European Sculpture and Decorative Arts.

A fully illustrated exhibition catalogue will be published by The Metropolitan Museum of Art and distributed by Yale University Press. It will be available for purchase from The Met Store.

The catalogue is made possible by the Diane W. and James E. Burke Fund.

Additional support is provided by Irene Roosevelt Aitken and Marilyn and Lawrence Friedland.

The exhibition’s Audio Guide will bring listeners behind the scenes on the collaborations among Disney’s animators and artists. Hear commentary and personal reflections from iconic figures including Angela Lansbury and Paige O’Hara (the voices of Mrs. Potts and Belle, respectively, from the feature film Beauty and the Beast), producer Don Hahn, and animators Glen Keane and Jean Gillmore. The Audio Guide can be accessed on rental devices in the Museum and for free online through The Met’s website and Spotify.

The Audio Guide is supported by Bloomberg Philanthropies.

Related exhibition programming will include a “Met Speaks” panel discussion on December 14 about the animation of decorative arts in 18th-century France, featuring exhibition curator Wolf Burchard along with Sarah Lawrence (Iris and B. Gerald Cantor Curator in Charge of European Sculpture and Decorative Arts, The Met), David Pullins (Associate Curator of European Paintings, The Met), Meredith Martin (Associate Professor of Art History, New York University), and Alicia Caticha (Assistant Professor of Art History, Northwestern University). A “Sunday at The Met” talk in January 2022 (date to be announced) will feature Disney animation legends Don Hahn and Glen Keane reflecting on their careers. There will also be several Access programs and workshops for teens, families, and educators. Further details are forthcoming and will be available on The Met's website.