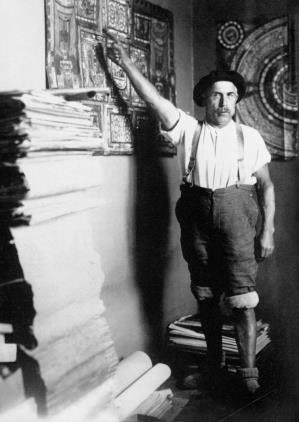 Adolf Wolf Li (1864-1930) became a draftsman, composer and author in Waldau Mental Asylum, to which he was committed in 1895 at the age of 31 after being diagnosed with schizophrenia. Until his death there in 1930 he created a huge body of work, a universe on over 25,000 pages, which he himself described as 'St. Adolf Giant=Creation’. His work is unique in the art of the 20th century. In the Zentrum Paul Klee Wolfli’s writings form for the first time the focus of a large-scale exhibition. The Creaviva Children's Museum responds to its contents with the interactive exhibition Small Universe.

There was no guarantee that Adolf Wolf Li would ever have an artistic career. His family came from poor circumstances. He was dismissed as a 'rascal', and later worked in various jobs as a day-labourer. As an autodidact, Wolf Li created a body of work whose visionary pictorial power continues to fascinate.

Wolf Li himself considered his body of writings, on which he worked with a few interruptions from 1908 until his death in 1930, to be his masterpiece. It contains an ideal life story that sends him and his loyal followers travelling through the countries and continents of imagined worlds. They are fantastical interior journeys which even extend into space, and which contrast remarkably with Wolfli's confinement in Waldau. In an act of self-empowerment he reinvented the circumstances of his life in these writings. These stories are bound in magnificent volumes interspersed with pieces of music, poems and illustrations. Wo If Li saw these volumes as fair copy, carefully considered manuscripts publication. The exhibition in the Zentrum Paul Klee follows the preference of the artist and for the first time places a selection of the volumes, which for reasons of conservation are usually not lent out, at the centre of the presentation. The exhibition places Wolfli's drawings in the context of the notebooks and thus offers a special opportunity to encounter this unusual work in a new way. With over 150 works from the artist's oeuvre the exhibition provides a comprehensive glimpse of the holdings of the Adolf Wolf Li Foundation.

Apart from the volumes and the drawings related to them, the exhibition presents a selection from Wolfli's so-called 'bread-and-butter art', the pencil drawings from his early period, as well as documentary material from the everyday life at the asylum.

'Wolfli's oeuvre develops along the abyss. Over the fragments of a problematic existence he creates through the force of art a work of great poetic power that touches us even today. At the same time this exhibition represents a statement for the maladjusted and the unusual for which there is barely any room in a world that adheres ever more closely to rigid norms.’ Hilar Stadler, Curator of the exhibition

Publication
To coincide with the exhibition, the Adolf Wolf li Foundation is making Walter Morgenthaler’s source text Ein Geisteskranker als KunstlerlA Mental Patient as an Artist) which was published in 1921 and presented a challenge to both art and psychiatry, available once again. The new edition is accompanied by analyses and accounts by experts and published by the Verlag der Buchhandlung Walther und Franz Konig. The publication is being presented on 19 June at a book launch in the Swiss Museum of Psychiatry.

Accompanying programme
The exhibition is framed by a varied accompanying programme. This includes a conversational guided tour about the artist Jean Dubuffet's concept of Art Brut with Sarah Lombardi, Collection de Г Art Brut, Lausanne, and Fabienne Eggelhofer, Curator in Chief at the Zentrum Paul Klee on 13 June 2021; a spoken-word homage to the artist Adolf Wolfli by 'Bern ist iiberall' in German and French with musical accompaniment on 20 June 2021 and a concert by the Proton Ensemble on 15 August 2021, playing compositions by Ezko Kikoutchi, Annette Schmucki and Walter Feldmann based on Wolfli’s 'musical approach'.

Curator
Hilar Stadler is an art historian. He was born in Lucerne in 1963 where he lives and works. Stadler studied art history and film studies at Zurich University. He is the Director of the Adolf Wolfli Foundation at the Kunstmuseum Bern and also works at the Museum im Bellpark in Kriens. He is active as a freelance curator and publicist in the fields of art, architecture and photography.

The exhibition is a collaboration between the Zentrum Paul Klee and the Adolf-Wolfli Foundation.