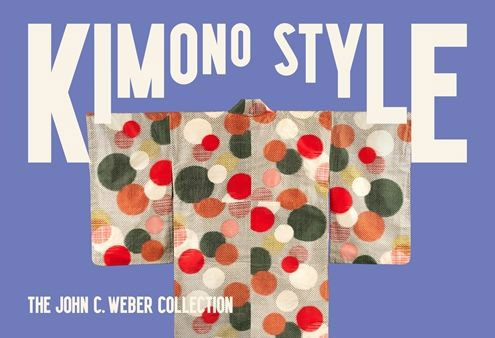 Kimono Style: The John C. Weber Collection will explore the artistic exchanges between the kimono and Western fashion through more than 60 examples of the T-shaped Japanese garment, as well as Western couture, Japanese paintings, prints, and decorative arts

Opening at The Metropolitan Museum of Art on June 7, 2022, Kimono Style: The John C. Weber Collection will trace the transformation of the kimono from the late 18th through the early 20th century, as the T-shaped garment was adapted to suit the lifestyle of modern Japanese women. The exhibition will feature a remarkable selection of works, including a promised gift of numerous modern kimonos from the renowned John C. Weber Collection of Japanese art, as well as highlights from The Costume Institute’s collection. More than 60 kimonos, including men’s and children’s wear, will be displayed alongside Western garments, Japanese paintings, prints, and decorative art objects.

The exhibition is made possible by the Mary Livingston Griggs and Mary Griggs Burke Foundation Fund, 2015.

“This outstanding exhibition presents the kimono from a transnational perspective, highlighting the artistic conversations between Japan and the West, and the garment’s continued impact on designers around the world,” said Max Hollein, Marina Kellen French Director of The Metropolitan Museum of Art. “We are extremely grateful to John C. Weber for his promised gift, his loans to this exhibition, and his long-term support of Asian art at The Met.”

Monika Bincsik, the Diane and Arthur Abbey Associate Curator for Japanese Decorative Arts, said, “The kimono has served for centuries as a tableau on which to describe and record the histories of women. The variety of patterns and colors and the often-changing trends reveal much about Japanese culture and society when we shed light on the circumstances of the owners of these intricate garments and their production techniques. For many Western couturiers and designers, the kimono was a catalyst to inspire new motifs and novel cuts and to provide freedom to the wearer by creating space between the body and the clothes. At the same time, Western manufacturing techniques and materials along with artistic trends contributed to the modernization of the T-shaped garments and helped to create fresh styles.”

The weaving, dyeing, and embroidery techniques for which Japan is so well known reached their peak of artistic sophistication during the Edo period (1615–1868). Members of the ruling military class were the primary consumers of sumptuous kimonos, each one being custom made. At the same time, a dynamic urban culture emerged, and the merchant class used its wealth to acquire material luxuries. One of the most visible art forms in daily life, kimonos provided a way for townspeople to proclaim their aesthetic sensibility. The kimono-pattern books and ukiyo-e woodblock prints used during that time are comparable to modern fashion magazines and provide evidence of a sophisticated system of production, distribution, and consumption.

Depictions of kimonos in Japanese woodblock prints were widely studied by Western couturiers in the late 19th century who were first inspired by the garment’s decorative motifs. Later, the kimono’s comparatively loose, enveloping silhouette and its rectilinear cut would have a most profound and lasting influence on Western fashion, with couturiers like Madeleine Vionnet and Cristóbal Balenciaga taking inspiration for their avant-garde creations from the kimono’s construction and geometric lines.

In the Meiji period (1868–1912), Western clothing was introduced to Japan. Simultaneously, modernization and social changes enabled more women to gain access to silk kimonos than ever before. Later, some of the kimono motifs were even inspired by Western art. Around the 1920s, affordable ready-to-wear kimonos (meisen) became very popular and reflected a more Westernized lifestyle. These were sold in department stores modeled on Western retailers, following Western-style marketing strategies.

Kimono Style is organized thematically and largely chronologically across 10 galleries. A number of the textiles will be rotated in October.

The exhibition will begin with a look at the costumes worn for Japan’s traditional forms of theater, Noh and Kyōgen, to highlight earlier traditions of clothing from which these elaborate costumes derive. While the two theater forms share roots, they grew from different stage conventions: Noh is solemn drama, while Kyōgen is comic and emphasizes dialogue. They developed together in the 14th century, with Kyōgen pieces performed during interludes or between acts of the main Noh play. The costumes—ornately decorated silk weaves, often made in the Nishijin district of Kyoto, for Noh, and simpler dyed fabrics for Kyōgen, such as the Kyōgen suit with rabbits jumping over waves—were integral to distinguishing the age, social status, and gender of the different characters, all played by male actors. Deriving from actual garments, these costumes preserved past traditions of apparel and shed light on Japanese textile history.

In the early days of Noh theater, during the Muromachi period (1392–1573), audience members often gave their own richly decorated clothing to actors in appreciation. These precious gifts subsequently were transformed into costumes, a tradition that likely led to the creation of exquisite garments specifically for the stage, such as the elegant Noh costume (nuihaku) with orchids and interlinked circles on view in the exhibition, decorated with refined gold foil and silk embroidery patterns

During the Edo period (1615–1868), the military government’s strict control of society meant that dress was not an entirely free or personal choice. Many aspects of clothing, such as the use of gold and expensive techniques, were regulated by the Tokugawa shogunate. At the top of the social hierarchy were the samurai. On the rare official occasions when elite samurai women were seen in public, they wore finely crafted silk garments rooted in conservative traditions, like the Summer robe (hito-e) with court carriage and waterside scene from the late Edo period, made for a woman in the Tokugawa shogun family. Of the three tiers of commoners who followed the samurai in the social order—farmers, artisans, and merchants—merchant-class women had the most freedom in deciding what to wear. Although their choices were supposed to reflect their class position and conform to sumptuary laws, they often disregarded such rules in order to be fashionable and to show off their families’ wealth. Their distinct looks will be illustrated through a number of Edo-period woodblock prints and fashion books depicting the patterns and dye techniques.

Specialized apparel worn to conduct dangerous tasks—whether fighting enemy warriors or battling fires—exemplified the fusion of function and fashion in Japanese textiles. High-ranking samurai had access to the finest materials, including wool imported from Europe, and used boldly decorated battle surcoats (jinbaori) to project status and individual taste. Jinbaori, produced from about the 15th through the mid-19th century, were sleeveless garments originally worn over armor as protection from the weather that eventually became ceremonial wear, such as the Battle surcoat with tattered fan. Firefighters also enjoyed respect in Japan, especially in Edo (present-day Tokyo), where wood architecture led to frequent outbreaks of fire. Samurai firefighters wore expensive garments made of imported wool. The townsmen’s coats were reversible and made of thick, quilted cotton with a plain indigo-dyed exterior and an elaborately decorated interior, usually depicting warrior heroes and mythical creatures that instill bravery or are related to water. One example portrays a legendary warrior, Tarō Yoshikado, who acquired magical skills to be able to morph into a toad.

Access to cotton for commoners, especially those living in the north, increased in the late 17th century with the establishment of the kitamaesen, a commercial shipping route between northern and central Japan, which enabled the secondhand clothing trade to flourish. Castoff cotton clothing was brought from Edo to Osaka and dispersed to the north. Nothing was wasted. The respect for and ingenious use of scarce materials led to the emergence of regional folk textile traditions. On view will be sturdy working clothes for farmers and fishermen as well as lightweight indigo-dyed cotton kimonos for women intended for summertime.

After the collapse of the Tokugawa shogunate in 1868 and the abolition of the class structure, the modernization of the Japanese fashion system occurred first in textile production. Global trade and industrialization in the second half of the 19th century vastly expanded Japan’s access to expensive or restricted wool, cotton, and machine-spun silk. Kimono patterns in the early to mid-20th century increasingly drew from Western art movements, including the organic style characteristic of Art Nouveau and the bold, geometric forms of Art Deco, as can be seen in the Summer kimono (hito-e) with swirls. At the same time, Western couturiers looked to Japanese art and clothing. Kimonos were first reinterpreted as dressing gowns, and later, primarily their fabrics, became a source of inspiration for the creations of couture houses such as Worth. By the early decades of the 20th century, the garment’s rectilinear form and loose shape revolutionized Western fashion: couturiers gave up the S-shaped, corseted bodice for a flat, straighter, modern line. Parisian innovators such as Paul Poiret, Callot Soeurs, and Madeleine Vionnet borrowed Japanese ideas and draped their garments from the shoulder, rather than tailoring the fabric to follow the shape of the body. For example, Poiret’s modernist “Paris” coat from 1919, one of the highlights from The Costume Institute’s collection, was constructed using a single 15-foot length of silk velvet with minimal cutting, recalling the concept of creating a kimono from a single bolt of fabric without any waste and using only rectilinear elements.

In the Edo period, dry-goods stores or fabric merchants (gofukuten) sold high-quality, made-to-order kosode (the predecessor of the kimono, with small sleeve openings) of silk or fine hemp to men and women of the samurai and wealthy merchant classes. Precursors to the department store, the best-known gofukuten all had branches in multiple cities, including Kyoto, from where they ordered the fabrics. Around the early 20th century, these gofukuten gradually transitioned into modern department stores, adopted Western retail practices, and promoted a modernized lifestyle.

Affordable, stylish kimonos made from meisen, an inexpensive silk woven from predyed yarns, a technique known as ikat (kasuri), became popular in the early 20th century. By the 1920s and 1930s, working- and middle-class women from high-school students to shop assistants could buy these casual, bright-colored, ready-to-wear modern kimonos with bold, graphic patterns. Department stores frequently released new designs to spark trends and inspire purchases. Many meisen kimono patterns were inspired by avant-garde art movements, such as Italian Futurism and the Dutch “De Stijl.” Piet Mondrian’s compositions were particularly influential, as demonstrated by a large ikat (ōgasuri) kimono in bright yellow, teal, and raspberry red.

Since the second half of the 20th century, the kimono’s iconic structure has been a source of inspiration in both Japanese and Western fashion. Some modern designers use its shape as a starting point for architecturally constructed garments, as seen in the work of Issey Miyake and Cristobal Balenciaga, whose Evening wrap from 1951 will be on view. Others play with the kimono’s symbolic associations. Remixed and reinterpreted by Japanese designers active in the West, including Yohji Yamamoto and Rei Kawakubo, the kimono dynamically reflects Japanese culture both to the world and back onto itself as evident in Rei Kawakubo’s Ensemble for Comme des Garçons featuring a manga figure. Through all these iterations, the kimono has gestured toward a future beyond fashion trends, cultural boundaries, and gender norms.

A fully illustrated catalogue will accompany the exhibition. Published by The Metropolitan Museum of Art and distributed by Yale University Press, it will be available for purchase from The Met Store.

The catalogue is made possible by the Florence and Herbert Irving Fund for Asian Art Publications. Additional support is provided by the Richard and Geneva Hofheimer Memorial Fund.

The exhibition will feature related programming; details will be available on The Met’s website.