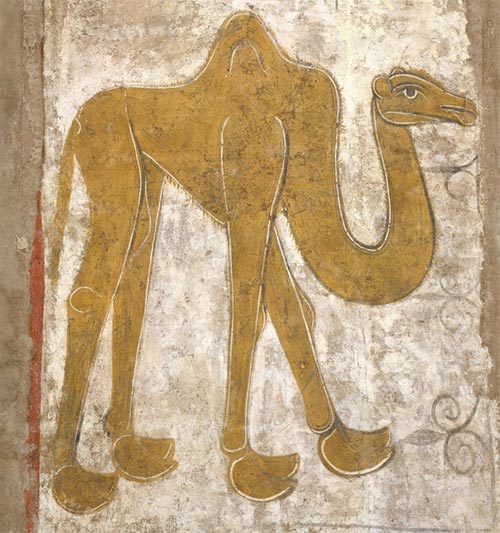 Camel from the Church of San Baudelio de Berlanga (detail), Spain, first half of the 12th century (possibly 1129–34). Fresco transferred to canvas. The Metropolitan Museum of Art, New York, The Cloisters Collection, 1961 (61.219)

Communities of Christians, Muslims, and Jews lived and worked side by side in medieval Spain for centuries, and the vibrant artistic traditions they created often intersected in ways that transcended religious differences. Opening August 30 at The Met Cloisters, Spain, 1000–1200: Art at the Frontiers of Faith will bring together a group of works that attest to the diversity of Spanish art during this period. Displayed in the Fuentidueña Chapel gallery, which typically focuses solely on the Christian tradition, this wider ranging exhibition tells a more nuanced story, demonstrating the ease with which objects and artistic ideas crossed religious boundaries. About 40 works—including silk textiles, ivory carvings, illuminated manuscripts, frescoes, and monumental sculptures— will be placed in dialogue with each other, revealing a dynamic, interconnected past that often mirrors the present.

The exhibition is made possible by the Michel David-Weill Fund.

“Finding moments of connection and exchange in our collective cultural heritage is at the heart of The Met’s mission,” said Max Hollein, Marina Kellen French Director of The Met. “By exploring how medieval Spanish artists and patrons found inspiration in the visual traditions of different religions, this sumptuous exhibition will showcase the complex, rich, and often surprising artistic results of interfaith interaction.”

Julia Perratore, the exhibition’s curator, added: “In medieval Spain, geopolitical frontiers, or borderlands, were understood as places that simultaneously separated and connected different territories. This conception of the frontier is also an apt metaphor for medieval Spanish artistic creation because communities of different faiths, while maintaining their own different beliefs, also developed shared interests and tastes—daily navigating the tension between separation and connection.”

The exhibition’s chronology, 1000 to 1200, corresponds to a pivotal era in the history of the Spanish Middle Ages—one that saw significant shifts in the balance of power between the Christian and Muslim rulers among whom the Iberian Peninsula was divided, destabilizing long-standing social relationships and introducing new tensions among religious communities. Yet the visual arts make it clear that this was not a purely divisive age. Geopolitical frontiers became important places of connection and exchange between sovereignties. Artists and patrons of the Christian-ruled northern peninsula engaged as never before with the cosmopolitan arts of southern, Muslim-ruled Spain (al-Andalus). They emulated, adapted, and appropriated the colorful silks, delicately carved ivories, and fine metalwork they encountered, even as they embraced the Romanesque style of Christian western Europe.

Drawn mainly from The Met collection, with some loans from other institutions, the works of art that visitors will encounter throughout the Fuentidueña Chapel gallery illustrate this close connection between the arts of Muslim- and Christian-ruled Spain. Examples will include an ornate Hebrew Bible with decorative elements found in both Islamic and Christian manuscripts, demonstrating the tendency for medieval patrons and artists to alternate between visual languages. Fragments of grave markers will showcase Arabic inscriptions and architecturally inspired decorations, such as horseshoe arches reminiscent of the Great Mosque of Córdoba. In turn, a Beatus manuscript will reveal Christian admiration for the monuments of Córdoba. An overview of the frontier monastery of San Baudelio de Berlanga will trace the transfer of motifs and patterns between Islamic textiles and Christian painting and sculpture and will also register aspects of life on the frontier; for example, a camel depicted in one of the monastery’s frescoes shows that the monks of San Baudelio, living in Christian territory, encountered travelers riding on creatures that were brought to Muslim Spain from distant lands. A painted wooden coffret will offer a rare depiction of the confrontation of Christian and Muslim armies, while two luxurious votive plaques commissioned by Queen Felicia of Aragon will reveal the larger trade and political networks of the day through the incorporation of Byzantine and Islamic objects.

Responding to the dearth of explicitly Jewish art surviving from the period, a rare letter of the 12th-century scholar and poet Judah ha-Levi sheds important light on the Jewish experience in Spain. At the same time, the many secular objects, such as carved ivory boxes and patterned textiles, remind visitors that people of all faiths enjoyed the luxury arts, providing evidence of shared artistic taste that rose above cultural and religious prejudices. Through these objects and more, the exhibition will demonstrate the sustained history of multifaith coexistence and interaction in the Iberian Peninsula.

The exhibition is organized by Julia Perratore, Assistant Curator, The Met Cloisters.

In conjunction with the exhibition, The Met will offer a variety of educational programs, including an Art History Study Group and a virtual MetSpeaks lecture; further details to be announced. A past Insider Insights virtual talk about a painting featured in the exhibition is available on The Met website.

Additionally, two related discussions have been co-organized by Fordham’s Center for Jewish Studies and The Met Cloisters. These free virtual events will include “The Cloisters and the Jews in Medieval Spain: A Conversation on Art, Literature, and History” on September 19 and “Exhibiting Medieval Spain: Yesterday and Today” on December 5 (click links for details and registration).

Spain, 1000–1200: Art at the Frontiers of Faith will be accompanied by the fall 2021 Metropolitan Museum of Art Bulletin. This Bulletin is made possible in part by Tom and Diahn McGrath.

The Met’s quarterly Bulletin program is supported in part by the Lila Acheson Wallace Fund for The Metropolitan Museum of Art, established by the cofounder of Reader’s Digest.

The public can learn more about The Met Cloisters through a number of online resources. A new digital guide is available for free as part of the Bloomberg Connects app, which features content on select cultural organizations around the world. Whether visiting The Met Cloisters in person or virtually, users can peruse objects, listen to an Audio Guide, watch videos, and explore the Spain, 1000 –1200 exhibition in both Spanish and English. Bloomberg Connects can be downloaded from the Apple App Store or Google Play Store. Additionally, The Met Cloisters Primer provides a dynamic and immersive look at the Museum’s architecture, gardens, and art collection.

The Met Cloisters digital guide on the Bloomberg Connects app and the Audio Guide are supported by Bloomberg Philanthropies.

The Primer is made possible by Art Mentor Foundation Lucerne.

Additional support is provided by Bloomberg Philanthropies and the Director’s Fund.

About The Met Cloisters:

Opened in 1938 as a branch of The Metropolitan Museum of Art, The Met Cloisters is America’s only museum dedicated exclusively to the art and architecture of the Middle Ages. Including a museum and gardens within a single complex, it derives its name from the portions of four medieval cloisters incorporated into a modern museum structure. Not replicating any one particular medieval building type or setting, but rather designed to evoke the architecture of the later Middle Ages, The Met Cloisters creates an integrated and harmonious context in which visitors can experience the rich tradition of medieval artistic production, including metalwork, painting, sculpture, and textiles. By definition, a cloister consists of a covered walkway surrounding a large open courtyard that provides access to other monastic buildings. Similarly, the Museum’s cloisters act as passageways to galleries and gardens, providing visitors with an inviting place for rest and contemplation, as they often did in their original monastic settings.