Between 28 January and 7 May 2023 the Zentrum Paul Klee is devoting an extensive exhibition to the little-known late work of the Catalan artist Joan Miro. The expressive large-format works show a surprisingly raw side of his works, even for lovers of Miro’s, and are distinguished by a constant search for new expressive forms.

Joan Miro is known for his colourful surrealist dream worlds created in the 1920s and 1930s. He began to question traditional painting early on. Particularly after his long-awaited move into his own large studio in Palma in 1956, the Catalan artist extended his concept of painting in a hitherto unfamiliar direction. He revised the whole of his previous reuvre, reworked early pieces or returned to works that had been left incomplete. This moment of selfcriticism and a new beginning forms the starting point for the exhibition at the Zentrum Paul Klee.

The exhibition features 74 works, mostly from the late 1960s, the 1970s and the early 1980s. Most come from the holdings of the Fundacio Joan Miro, Barcelona as well as the Fundacio Pilar i Joan Miro in Mallorca, and are being shown in Switzerland for the first time.

'We need to follow what this young man is doing.’ Joan Miro and Paul Klee

In 1956 - at the age of 63 and 20 years after he first expressed the wish - Joan Miro was able to fulfil his dream of having a big studio of his own, and moved to Palma with his family. By that time his life and work had been marked by many changes: until the outbreak of the Spanish civil war in 1936 Miro spent about four months each year in Paris and the rest of his time in Spain, in Barcelona or Mont-roig, where his family had a country house. While he nurtured his contacts with the art scene in Paris, he was able to work focused and without distraction in Spain. In Paris he met many artists and poets from the Surrealist movement, and made friends with Andre Masson, who had his studio next door. It was Masson who drew Miro's attention to the work of Paul Klee.

‘Klee was the pivotal encounter of my life. Under his influence my painting freed itself from all earthly bonds. Klee made it clear to me that a patch, a spiral, even a dot can be every bit as much an object of painting as a face, a landscape or a monument,' Joan Miro said of Paul Klee, who was fourteen years his elder. The Swiss artist is also said to have expressed positive views about the Catalan's work to his Bauhaus colleague Wassily Kandinsky, with the words ‘we need to follow what this young man is doing'. Even though the two never met in person, the encounter with Paul Klee's work made a lasting impression on Joan Miro. Both artists, for example, engaged with children's drawings and prehistoric art, and this is apparent in the reduced formal language of their own works.

The outbreak of the Spanish civil war forced the Miro family to stay in France between 1936 and 1940. After the invasion of German troops in 1940 they returned to fascist Spain where Miro worked in a modest studio in Barcelona as well as the country house in Mont-roig until the end of the Second World War. In spite of these many upheavals, Miro's work was enormously fruitful during those years.

In his new studio in Palma, Miro was finally able to bring together all his boxes of earlier works. When he began unpacking and reordering them, he was able to review his paintings, drawings, drafts and sketchbooks: ‘in the new studio i had enough space for the first time, i was able to unpack crates of works that went back years and years, i had not seen these things since leaving Paris [...] before the war. [...] When i finally unpacked them in Mallorca, i went through a process of self-examination.' 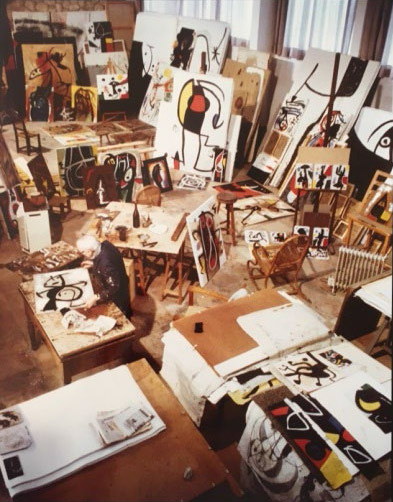 After this critical ‘self-examination', Miro came to see conventional easel painting as restrictive and sought new forms of expression. He wanted to distance himself from his earlier Surrealist-influenced works, which had already been commercialised by postcards and prints, and develop a simpler, universal pictorial language. His art was to be accessible and comprehensible to everyone. For example, rather than using the brush he ‘painted' with fire, scissors and a wet broom - an act of destruction that produced new creative results, the ‘toiles brOlees'. He extended his technique to include tapestries and the so-called ‘sobreteixims', in which he combined tapestry, collage and painting. He worked with textiles, or overpainted classical paintings he bought at the flea market with impulsive brushstrokes and simple poetic signs such as circles, stars and crescent moons. 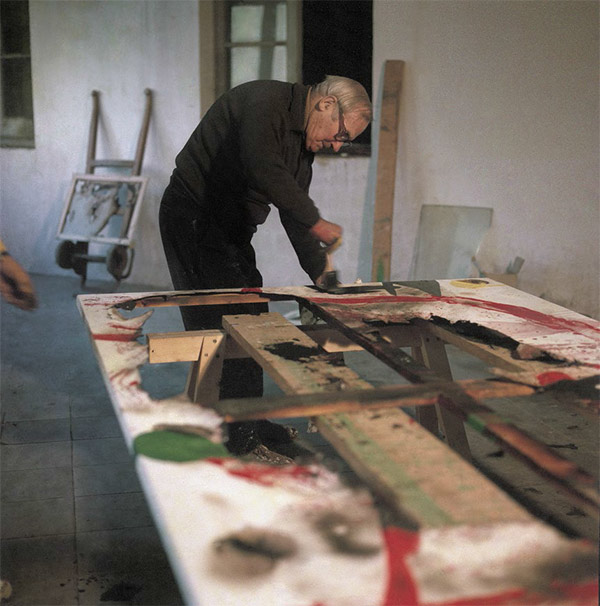 Trips to the USA and Japan confirmed him in his new artistic endeavours. He was interested in and inspired by the large formats and gestural method of the artists of Abstract Expressionism in the USA, as well as the calligraphy, emptiness and concentration in Japanese culture. He produced large-format paintings and playful ceramic and bronze sculptures reminiscent of Pop Art, whose undiminished artistic topicality remains impressive even today.

Collaboration
The exhibition is the result of a collaboration between the Zentrum Paul Klee and the Fundacio Joan Miro, Barcelona where the major exhibition Paul Klee i els secrets de la natura (until 12.2.2023) is on show at the moment.

Catalogue
To coincide with the exhibition a richly illustrated catalogue is being published, with an introduction to Miro's late work as well as essays about Joan Miro's large studio in Palma and the reworking of his own works. The catalogue is published by Snoeck Verlag, Cologne, and costs CHF 38.

1893
Joan Miro i Ferra is born in Barcelona on April 20.
1907
Following his parent's wishes, Miro enrols in a business school in Barcelona, but he also attends art classes at the Escola Superior d'Arts Industrials i Belles Arts.
1912
He decides to devote himself entirely to painting and enrols at the art school run by Francesc Gall in Barcelona.
1920
Miro travels to Paris for the first time. The upcoming years he spends alternating between Paris, Barcelona and his parents' farmhouse in Mont-roig. In Paris he socialises with poets and artists of Dadaism and Surrealism.
1929
He marries the Majorcan Pilar Juncosa. Their daughter Maria Dolors is born one year later in Barcelona.
1936
The outbreak of the Spanish Civil War forces the Miro family to stay in Paris. 1940
The Germans bomb Normandy, where the family lives since 1939. As a consequence they return to Spain.
1942-56
Miro is based in Barcelona, spends summers working in Mont-roig and visits Paris frequently after the Second World War. He adds ceramics and sculptures to his artistic repertoire.
1947
Miro's first journey to the United States lasts several months. It takes him to New York and Cincinnati, where he executes a mural.
1956
He moves into his new large studio in Palma, designed by Josep Lluis Sert. Later he acquires Son Boter, an adjoining plot with old buildings, where he sets up a second studio. Mallorca becomes his permanent residence.
1959
During his second stay in New York he finds his own development confirmed in Abstract Expressionism.
1966
In Japan, Miro acquaints himself particularly with calligraphy.
1971
He collaborates with Josep Royo and develops textile works - the ‘So- breteixims'.
1973
He works on a series of partially burned canvases - the ‘Toiles brdlees'.
1978
The monumental sculpture Pair of Lovers Playing with Almond Blossoms is installed in Paris.
1983
Joan Miro dies in Palma on December 25.