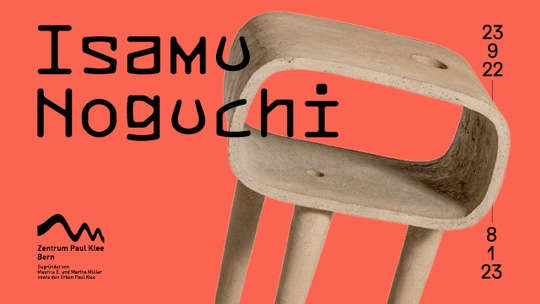 Between 23 September 2022 and 8 January 2023 the Zentrum Paul Klee is devoting a comprehensive exhibition to the Japanese-American world citizen and important sculptor and designer Isamu Noguchi (1904–1988). It reveals a radically interdisciplinary oeuvre that brings together art and design.

Isamu Noguchi is one of the most experimental artists of the 20th century, and one of the most important sculptors and designers of the United States. His varied body of work is marked by a search for the connection between art and life: among other things he made stage sets, light objects, furniture, public gardens and playgrounds. He drew inspiration from past and contemporary cultures: Japanese gardens, astronomic observatories in India or the abstract art of Surrealism.

As a politically committed artist he used his interdisciplinary and intercultural approach to expand the understanding of sculpture. He was not interested in making objects solely for galleries and museums, but in designing spaces for society.

On the exhibition
Over ten sections, this comprehensive exhibition explores the work of Noguchi, who moved regularly, as a world citizen, between the USA, Japan and Europe, and combined different cultural traditions and techniques in his incomparable work. It is the first extensive show in Switzerland to present the full range of Noguchi’s category-defying practice.

The earliest works are brought together in the section Portrait Heads – Friendship and Collaboration. It includes figurative works from the 1920s, when Noguchi was at the beginning of his artist career, to the early 1950s. The various different techniques of the portrait busts confirm Noguchi’s early skill in the use of different materials, techniques and tools: ‘I don’t believe in sticking with one medium. I’m afraid of its dominating me and becoming my trademark.’

In 1927 Noguchi worked as an assistant in the studio of the sculptor Constantin Brâncuşi in Paris. There he not only became proficient in the use of different tools but also learned what a sculpture can do in space. In the section Endless Coupling – Abstractions, numerous works with shiny surfaces and biomorphic shapes testify to the lasting impression made on Noguchi by this stay in Paris.

Noguchi found the formal reduction that he learned from Brâncuşi, as well as the perfection of his training in his use of tools and natural materials confirmed in the Japanese conception of art. The radical way in which he incorporated techniques from different cultures – traditional and contemporary – in his works is apparent in terracotta figures and mechanically pleated metal sculptures shown in Global Distillation – Between Tradition and Modernity.

Noguchi is presented as a political artist in the section Tortured Earth – Political Commitment. As a consequence of the burgeoning racism in the United States, which had the most devastating effect on the African-American population, he adopted a committed position against this injustice. Among other things he designed the set for Erick Hawkins’ play about John Brown’s struggle against slavery. ‘Clearly I yearn to bring sculpture into more direct contact with the day-to-day experiences of life.’ Noguchi involved himself in the political and social discussions of the day with designs for monuments and sculptures made after his stays and travels in Europe and East Asia in the early 1930s. Under the title Social Protest the Zentrum Paul Klee is showing a selection of his conceptual projects for public spaces that addressed social issues.

Noguchi’s love for artistic experimentation and his sculptural interest in technology and science are manifested both in his use of industrial materials and in his new vision of space. He was inspired to engage with contemporary discourses by his lifelong friend, the inventive architect R. Buckminster Fuller. This area is addressed in the section entitled Expanded Universe – Science and Technology.

In the 1940s many Surrealist artists fled from Europe to New York. The abstract biomorphic forms of the dreamworlds that they depicted were one inspiration for Noguchi to make what he called his ‘Interlocking Figures’. In combining traditional Japanese carpentry techniques with contemporary abstraction, he also processed his wartime experiences of uncertainty and helplessness in these works, to which the section Interlocking Worlds – Biomorphic Forms is devoted.

Noguchi had been interested in the desert landscape of the American State of Arizona when he became a voluntary inmate of an internment camp for Japanese people living on the West Coast. Later he captured his impressions of the landscape and its light in a series of works presented in the section Lunar Landscapes – Light and Lightness. For Noguchi, light - in addition to the impressions of the desert landscape, also the light of the moon and fire – became a sculptural material. In the 1950s his experiments led to the Akari lamps made of Japanese paper and bamboo. In the Japanese language ‘Akari’ means both light in the sense of consciousness and lightness in the sense of being or essence, and is thus the ideal name for Noguchi’s light sculptures.

In numerous sculptures from the 1960s the artist combined smooth perfect surfaces with roughly carved stone. His visits to quarries in Italy and Greece brought him closer to the essence of marble and different mechanical ways of working it. New Explorations – Rawness and Perfection shows the new forms and surface treatments that Noguchi deliberately leaves in tension with one another.

Throughout his career, Noguchi’s interest in play becomes apparent in many different media and collaborations. Playscapes – Ideal Worlds reveals that as well as different playgrounds Noguchi also made the set element Jungle Gym for Erick Hawkins’ Stephen Acrobat (1947). Central to this is the interaction and involvement of the public, as visitors can experience for themselves with the Play Sculpture placed outside the Zentrum Paul Klee.

Isamu Noguchi was born in 1904, the son of the American author Léonie Gilmour and the Japanese poet Yonejirō Noguchi. He lived and worked in the United States and Japan, undertook projects throughout North America and in Europe, Japan and Israel, accompanied by extensive travels. In his work he connects ideas from both past and contemporary cultures. Japanese gardens, astronomical observatories in India and the earthen mounds of prehistoric North American cultures resonate in Noguchi’s work just as much as the abstract art of the early 20th century or the Surrealist movement. According to time and place Noguchi employed the most diverse materials such as stone, wood, metal, plastic, ceramics, paper and electrical components. He worked both traditional craft and modern industrial techniques.

The furniture that Noguchi designed in the 1940s and 1950s have become design classics. The best known of these are the Akari light sculptures. In his work Noguchi did not distinguish between free and applied art. He wanted to make sculptural spaces in which people perceived space and sculptures in different ways through their movement.