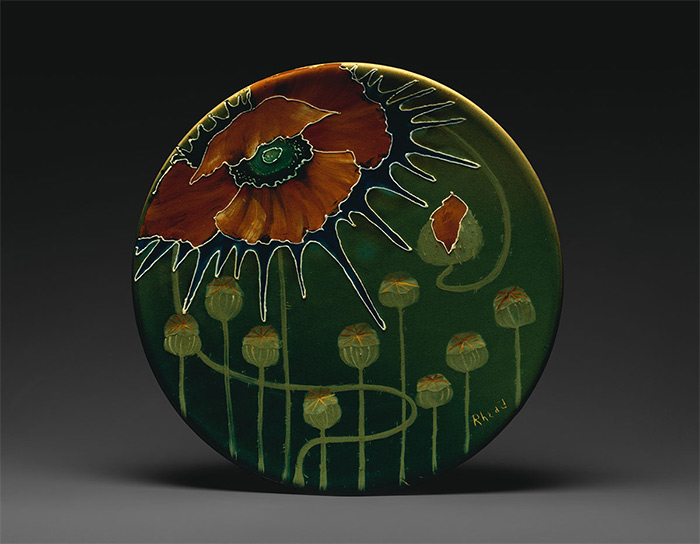 (New York, October 7, 2021)—Opening on October 22 at The Metropolitan Museum of Art, Gifts from the Fire: American Ceramics from the Collection of Martin Eidelberg will highlight over 150 works of American ceramics and pottery from the early 1880s to the early 1950s that detail the extraordinary and impressive accomplishments of American potters and ceramists working across the United States. The exhibition will feature a selection of works from the recent gift to The Met by scholar Martin Eidelberg, whose collection represents the new styles, techniques, and materials used by some of the foremost artists and potteries from the period and that exemplifies the nation’s artistic originality in the field of art ceramics and pottery.

The exhibition is made possible by the Frank H. & Eva B. Buck Foundation.

“We are deeply grateful to Martin Eidelberg for this transformative gift,” said Max Hollein, Marina Kellen French Director of The Met. "This collection is remarkable for its breadth and beauty, but also for the distinctly personal vision it reveals, especially as the field of American art ceramics and pottery was little researched or published when he began collecting. Gifts from the Fire is a celebration of both the artists and the art form, and we are thrilled to share these works—and the new stories they tell about the development of American pottery—with visitors and scholars alike.”

The exhibition includes work from the years following the 1876 Centennial Exhibition in Philadelphia and the earliest forays into American art pottery that defined the new American aesthetic in the late 19th century—often inspired by designs from Europe, China, and Japan. Among the highlights of the collection are the organic, nature-infused pottery of Louis C. Tiffany, the sculptural designs of Kitaro Shirayamadani and Anna Marie Valentien for Rookwood Pottery, and the highly stylized decorated vases by the influential, British-trained Frederick Hurten Rhead, as well as the exquisitely carved porcelains of Adelaide Alsop Robineau. The lyrical works by Finnish-born ceramist Maija Grotell and the expressive works by Henry Varnum Poor and Hunt Diederich made between the wars demonstrate the depth and quality of the Eidelberg Collection.

“This gift from Martin Eidelberg profoundly enriches our collection of American art pottery and early modern ceramics,” said Alice Cooney Frelinghuysen, Anthony W. and Lulu C. Wang Curator of American Decorative Arts. “Martin has had a long-standing relationship with The Met and has contributed significant scholarship to the field. This collection reflects Martin’s keen eye and knowledge of ceramics, and it is a privilege to share this selection with our public. The exhibition is a wonderful opportunity for visitors to witness the plethora of styles and ingenuity of artistic expression in clay during one of the most creative periods in our country.”

Emphasized throughout the exhibition are works by female artists, who had newly moved into professional pottery during this time—beginning with decoration and the feminine pastime of painting ceramics and quickly claiming their place as pioneers in the art form. They include M. Louise McLaughlin, of Cincinnati, and Adelaide Robineau, of Syracuse, New York, who worked in the highly demanding medium of porcelain. Robineau also developed lustrous crystalline glazes inspired by French ceramics at the turn of the century. Women decorators at the Newcomb Pottery in New Orleans and the Rookwood Pottery in Cincinnati are among others prominently featured. Other artists who contributed to the rich diversity of American art pottery include the innovative potter George E. Ohr, from Biloxi, Mississippi, and Artus Van Briggle and his wife, Anna Van Briggle, with their Art Nouveau and Symbolist-inspired work in Colorado Springs, Colorado. Many of the ceramics represented in the collection exhibit a great awareness of international trends in contemporary art and design.

Between the wars, talented émigrés fleeing political strife abroad, like Maija Grotell, Susi Singer, and Franz Wildenhain, adapted prevailing styles from their countries and produced outstanding work, often in a modernist vein. The exhibition features works created in light of the new styles emerging in the 1920s that reflect the pervasive influence of the School of Paris, Art Deco, and American Regionalism. Artists here include Wilhelmine Rehm for Rookwood in Cincinnati, Thelma Frazer for Cowan Pottery in Cleveland, and Glen Lukens in Los Angeles.

Across the United States, artists worked with industry to provide designs that would be both desirable to an increasing dinnerware market and at the same time help to define an American aesthetic. Examples include Waylande Gregory’s highly stylized Cubist renditions of polo players and the highly charged designs by Rockwell Kent for Vernon Kilns. Through the Eidelberg Collection, a fascinating narrative emerges along with insights into the challenges these ceramists faced as they sought to create art from clay.

The Eidelberg Collection, which was a gift to The Met as a continuation of the Museum’s 150th anniversary, joins three major gifts of ceramics by Robert A. Ellison Jr., establishing The Met as a preeminent place for the exhibition, interpretation, and study of art in clay.

Gifts from the Fire: American Ceramics from the Collection of Martin Eidelberg is curated by Alice Cooney Frelinghuysen, Anthony W. and Lulu C. Wang Curator of American Decorative Arts.

The exhibition is accompanied by the catalogue Gifts from the Fire: American Ceramics, 1880–1950, authored by Alice Cooney Frelinghuysen and Martin Eidelberg, which will be available on The Met's website and in The Met Store. The catalogue is richly illustrated with all new photography and includes an interview between Frelinghuysen and Eidelberg about his collection.

The catalogue is made possible by the William Cullen Bryant Fellows of The Metropolitan Museum of Art.