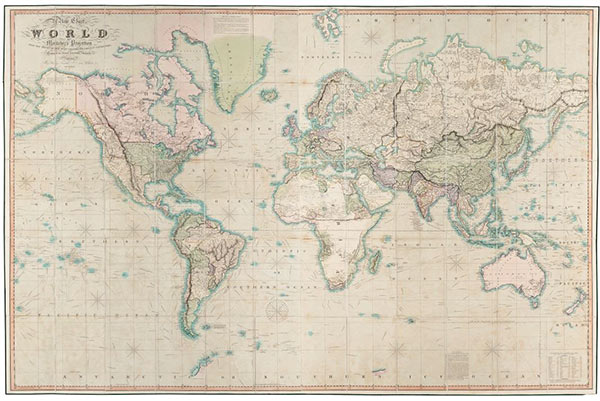 South Kensington – This April Christie’s presents a new themed auction, Around the World, showcasing a host of fascinating and eclectic items from all corners of the globe, exploring cultures, countries and the spirit of travel. Journeying from Australia to the Americas, via Africa and India, the auction features unique and unusual objects, artworks and mementos: discover a Mãori hei tiki pendant from New Zealand (estimate: £8,000-12,000), a rare thirty-four star civil war flag from North America (estimate: £10,000-15,000), and a set of prints after original photographs by Robert Falcon Scott of the Terra Nova expedition (estimate: £20,000-30,000). The sale will be held at Christie’s South Kensington on 28 April and offers something for travelers, explorers and collectors alike. Estimates range from £500 to £30,000 so don’t miss this opportunity to travel around the world with Christie’s.

From the Antarctic …
A highlight of the sale is a set of eleven photographs, copies of unique photographs taken by Captain Robert Falcon Scott himself, documenting the building of the expeditions base hut, the winter on Ross Island and the long, fateful summer’s march to the South Pole (estimate: £20,000-30,000, three of eleven illustrated below). Scott’s negatives and camera survived this expedition, as they returned with the first relief party from the Beardmore Glacier and were developed by the expedition’s photographer, Herbert Ponting, at the Ross Island hut before being shipped back to England. Very few were published at the time and many remained unseen and unknown, until recently. The photographs reveal the rigours of the extraordinary journey in a sublime landscape.

… To Asia …
Another stunning group of photographs offered in the sale are by contemporary photographer, Steve McCurry, one of the most well regarded American photographers of today. McCurry has worked all over the world, documenting people, cultures and events. His photograph of the ‘Afghan Girl’ is one of the most instantly recognisable and iconic images of the late 20th century, and was used on the front cover of the June 1985 issue of the National Geographic. McCurry is particularly captivated by Asia, where he believes one is transported to a completely different place to have new experiences and to engage in a sense of discovery. His passion to see the world has led him to observe and convey a sense of shared humanity throughout his work, from villagers celebrating Holi festival (estimate: £2,000-4,000, illustrated below right) to a Geisha ascending the stairs in a Kyoto subway (estimate: £3,000-5,000, illustrated below center). 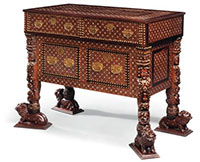 Further highlights from Asia include an unusual and elaborately Indo-Portuguese marquetry chest, from the late 17th to early 18th century (estimate: £20,000-30,000, illustrated right). The chest displays the blend of East and West seen in Colonial furniture and is typical of work from the former Portuguese colony of Goa. The pattern of intersecting circles that covers the surface of this chest is almost identical to a Contador, or cabinet on stand, in the Victoria and Albert Museum.

… To America …
Around the World presents a piece of US history: a rare American Civil War flag with thirty-four stars (estimate: £10,000-15,000, illustrated below).

The American flag was first conceived as a thirteen star version in 1777, since then it has been altered twenty six times. The Civil War flag offered in this sale represents a period of momentous change in American history: when Kansas joined the Union on 29th January 1861 as the 34th state. New flags were typically manufactured when a new state joined the Union, dating this flag to some point after Kansas joined the Union, but not after West Virginia joined as the 35th state in June 1863. 1861 was also the year of Abraham Lincoln’s election to President, which witnessed a growth of American patriotism and the formation of a national identity, which the flag embodies.

Also from America is a silver-mounted and engraved leather saddle, circa 1930 by Edward H. Bohlin Inc. (estimate: £20,000-30,000, illustrated right). Bohlin was born in Sweden in 1895 but moved to America where he first worked as a farmhand and learned to cowboy in Miles City, Montana. After opening his first shop in Cody, Wyoming, advertising leather goods and repairs, Bohlin was lured to Hollywood, California by the excitement and glamour of show business. Cowboys have always had a strong sense of style and pride, and a steady stream of business mixed with work producing costumes for the big film studios soon meant that Bohlin was firmly established as a major Hollywood figure and an icon of the Cowboy style. Over a long career, Edward Bohlin formed close friendships and created outfits and accessories for the most prominent of “Wild West” personalities and characters, including Hopalong Cassidy, The Lone Ranger, The Cisco Kid, Roy Rogers, John Wayne, Clint Eastwood, and more than one President of the United States of America. It is for his saddles that he is best remembered and celebrated, an unrivalled collection of which can be found in the Autry Museum of Western Heritage in Los Angeles, CA.