China: Through the Looking Glass 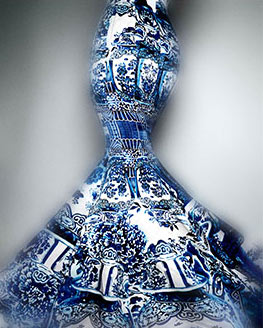 The Costume Institute’s spring 2015 exhibition, China: Through the Looking Glass, will be on view at The Metropolitan Museum of Art from May 7 through August 16, 2015 (preceded on May 4 by The Costume Institute Benefit). Presented in the Museum’s Chinese Galleries and Anna Wintour Costume Center, the exhibition will explore the impact of Chinese aesthetics on Western fashion and how China has fueled the fashionable imagination for centuries. In this collaboration between The Costume Institute and the Department of Asian Art, high fashion will be juxtaposed with Chinese costumes, paintings, porcelains, and other art, including films, to reveal enchanting reflections of Chinese imagery.

The exhibition is made possible by Yahoo.

“I am excited about this partnership between these two forward-thinking departments which will undoubtedly reveal provocative new insights into the West’s fascination with China,” said Thomas P. Campbell, Director and CEO of the Met. “The artistic direction of acclaimed filmmaker Wong Kar Wai will take visitors on a cinematic journey through our galleries, where high fashion will be shown alongside masterworks of Chinese art.”

In celebration of the exhibition opening, the Museum's Costume Institute Benefit will take place on Monday, May 4, 2015. Silas Chou will serve as Honorary Chair. The evening’s co-chairs will be Jennifer Lawrence, Gong Li, Marissa Mayer, Wendi Murdoch, and Anna Wintour. This event is The Costume Institute’s main source of annual funding for exhibitions, publications, acquisitions, and capital improvements.

“From the earliest period of European contact with China in the 16th century, the West has been enchanted with enigmatic objects and imagery from the East, providing inspiration for fashion designers from Paul Poiret to Yves Saint Laurent, whose fashions are infused at every turn with romance, nostalgia, and make-believe,” said Andrew Bolton, Curator in The Costume Institute. “Through the looking glass of fashion, designers conjoin disparate stylistic references into a fantastic pastiche of Chinese aesthetic and cultural traditions.”

Exhibition Overview
This is The Costume Institute’s first collaboration with another curatorial department sinceAngloMania: Tradition and Transgression in British Fashion in 2006, a partnership with the Department of European Sculpture and Decorative Arts. China: Through the Looking Glass will feature more than 140 examples of haute couture and avant-garde ready-to-wear alongside masterpieces of Chinese art. Filmic representations of China will be incorporated throughout to reveal how our visions of China are shaped by narratives that draw upon popular culture, and to recognize the importance of cinema as a medium through which we understand the richness of Chinese history.

The Anna Wintour Costume Center’s Lizzie and Jonathan Tisch Gallery will present a series of “mirrored reflections” focusing on Imperial China; the Republic of China, especially Shanghai in the 1920s, 1930s and 1940s; and the People’s Republic of China. These reflections, as well as others in the exhibition, will be illustrated with scenes from films by such groundbreaking Chinese directors as Zhang Yimou, Chen Kaige, Ang Lee, and Wong Kar Wai. Distinct vignettes will be devoted to “women of style,” including Hu Die (known as Butterfly Wu), Oei Huilan (the former Madame Wellington Koo), and Soong May-Ling (Madame Chiang Kai-shek).

Directly above the Anna Wintour Costume Center, the Chinese Galleries on the second floor will showcase fashion from the 1700s to the present, juxtaposed with decorative arts from Imperial China, including jade, bronze, lacquer, and blue-and-white porcelain, mostly drawn from the Met’s collection. The Astor Court will feature a thematic vignette dedicated to Chinese opera, focusing on John Galliano’s spring 2003 Christian Dior Haute Couture Collection.

Exhibition Credits
The exhibition, a collaboration between The Costume Institute and the Department of Asian Art, coincides with the Museum’s year-long centennial celebration of the Asian Art Department, which was created as a separate curatorial department in 1915. China: Through the Looking Glass is organized by Andrew Bolton, Curator, with the support of Harold Koda, Curator in Charge, both of The Costume Institute. Additional support is provided by Maxwell Hearn, Douglas Dillon Chairman; Denise Patry Leidy, Curator; and Zhixin Jason Sun, Curator, all of the Department of Asian Art.

Internationally renowned filmmaker Wong Kar Wai will be the exhibition’s artistic director working with his longtime collaborator William Chang, who will supervise styling. Nathan Crowley will serve as production designer for the exhibition–he has worked on three previous Costume Institute exhibitions including Superheroes: Fashion and Fantasy (2008),American Woman: Fashioning a National Identity (2010), and Schiaparelli and Prada: Impossible Conversations (2012).

The design for the 2015 Costume Institute Gala Benefit will be created by Wong Kar Wai and William Chang with 59 Productions, and Raul Avila, who has produced the Benefit décor since 2007.

“William Chang and I are pleased to be working in collaboration with The Costume Institute and the Asian Art Department of The Metropolitan Museum of Art on this exciting cross-cultural show,” said Wong. “Historically, there have been many cases of being ‘lost in translation’–with good and revealing results. As Chinese filmmakers we hope to create a show that is an Empire of Signs–filled with meaning for both East and West to discover and decipher.”

Related Content and Programs
A publication by Andrew Bolton will accompany the exhibition. It will be produced by The Metropolitan Museum of Art and distributed by Yale University Press, and will be available in early May.