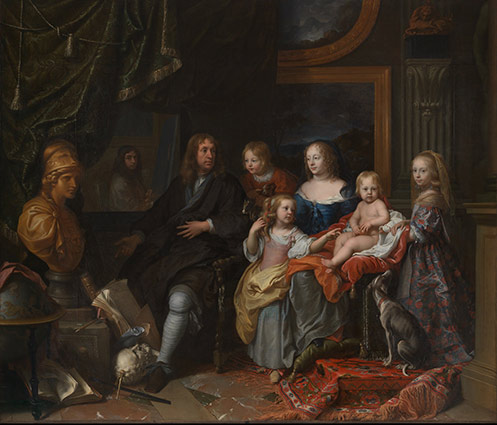 NOW ON VIEW IN THE GALLERIES

Charles Le Brun’s (French, 1619–1690) monumental portrait Everhard Jabach (1618–1695) and His Family (ca. 1660) is now on view in the European Paintings Galleries at the Metropolitan Museum after undergoing a ten-month conservation project. This extraordinary canvas recently emerged into the public eye after having been in a private collection for 183 years. The Metropolitan’s Paintings Conservation Department has done extensive work conserving the painting, including removing a discolored and disfiguring varnish and repairing severe distortions at the top of the canvas, which had been folded over a smaller stretcher in the early part of the 20th century, to fit into an English country house. A new, custom-made frame was specially created for the painting which was hung in the gallery yesterday.