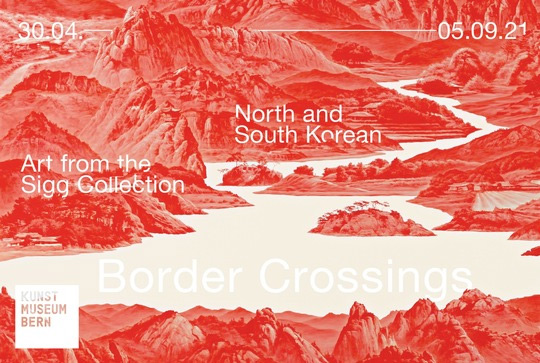 The Kunstmuseum Bern is reconciling the seemingly irreconcilable: contemporary art from North and South Korea. For the first time the two contrasting visions of art meet beyond the demilitarized zone and enter into a fascinating dialogue with one another. The exhibition consists of 75 works from the Sigg Collection, allowing an expedition through North and South Korean art between the 1970s and the 2010s. The show is accompanied by a selection of hand-painted North Korean posters and stamps from the collection of Katharina Zellweger.

The exhibition at the Kunstmuseum Bern leads us to the threshold of the Korean Peninsula, divided since 1953. A 250-kilometre border of barbed-wire fences and tank barriers divides Korea into two states that could not be more different. The art made concurrently in both states is also divergent. In the North a socialist-realist tradition of painting is cultivated, while in the South a vital contemporary art scene makes use of a diverse range of pictorial and media languages in order to serve their concerns. These contrasting views of the world enter into a dialogue in the exhibition, and invite the visitor to approach both the history and the present of Korea.

Two art systems and three states/ North Korea – South Korea – China
The art works in the exhibition are deliberately not separated by nation but grouped according to motifs or themes. The exhibition includes both socialist-realist paintings and critical engagements by South Korean artists with the history and division of Korea. Chinese artists who grew up on the border with North Korea or who belong to the Korean minority in China (Shen Xuezhe, He Xiangyu), take a look from their own side at their socialist neighbour, or simulate a fictional North Korean film festival in a state of conflict between experimental freedom and propagandistic demands (UTOPIA Group). 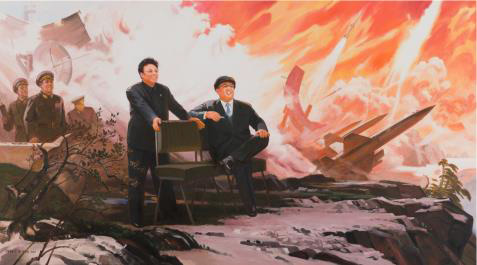 Art in North Korea has the task of stabilizing the political system and its rulers and spreading their messages. It exists only as a state art without a free choice of subject matter, expressive means or opportunities for exhibition. This art does not describe the everyday life of North Koreans, but educates society towards a distant utopian goal. Depictions of Kim Il Sung, Kim Jong Il or Kim Jong Un can be found in every official building. They are considered almost as icons, because the possession of such images outside of the country is forbidden. Nonetheless as unprejudiced a view of possible should allow new ways of looking at the works.

‘The accusation that North Korean art is mere propaganda explains only one part of these works. Because all art is always also an expression of the ideology of its time, and directly or indirectly conveys something of its living environment,’ says Kathleen Bühler, curator of the exhibition. ‘Rather than making hasty judgements, it was important for me to investigate the works that are accessible to us critically and more closely against the background of the conditions under which they were made.’

Depictions of historically important moments also appear in contemporary art in China and in South Korea. The Chinese artist Feng Mengbo, for example, translates a photograph from a North Korean news portal into a watercolour, thus creating a contemporary variant of a history painting. It shows Kim Jong Un, surrounded by senior military officers and the North Korean press standing on the rim of a shark tank. This randomly chosen scene allows us to learn something about the daily staging of the dictator in the North Korean press. Inbai Kim from South Korea, on the other hand, precisely resists the drama of heroic monuments. He makes sculptures that cannot in any way be politically interpreted. They are anonymous beings with mysterious scribbles or strange blank spaces on their faces. Only the traces drawn on their faces indicate their emotional states. 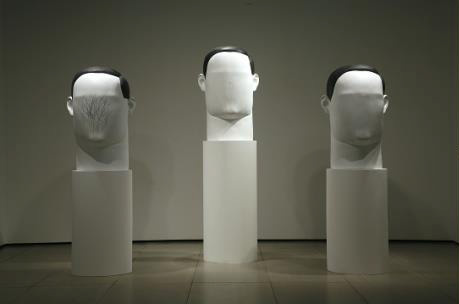 ‘Border Crossings’ tells the story of division, trauma, barriers and visits across both real and imaginary borders. In 2007 the South Korean artist Sea Hyun Lee painted two red landscape paintings (Red35 and Red33), showing sections from the 250 km long and 40 km wide border strip. The red refers to the socialist colour (which is almost taboo in the South), but also the strange landscape paintings that the artist saw using a night viewing device during military service. ‘They are landscapes of memory and pain,’ he says. The Chinese photographer Shen Xuezhe presents the border waterway Tumen River in melancholy black-and-white photographs and evokes the longings associated with borders. In his video The Yellow Swim Caps, on the other hand, He Xiangyu, who grew up in China near the border with North Korea, swims across the icy border river Yalu in order to imagine what North Korean defectors experience when they risk the illegal border-crossing into China. The South Korean artist Kyungah Ham smuggles designs into North Korea to have them reworked by professional embroiders. To this end she involved Chinese middle-men because she is forbidden to have direct contact with North Koreans. The embroidered pictures show motifs that are taboo in North Korea, such as the depiction of pomp as in the work Chandelier (2012/13).

Two collections, one exhibition / Korea – Switzerland – Bern
As the Swiss ambassador to China, Uli Sigg was also ambassador to North Korea between 1995 and 1998. This gave him a deeper insight into North Korean reality and the unique opportunity to buy works from the country’s art academies. These representations of the leaders Kim Il Sung and Kim Jong Il normally cannot leave the country. Through his contacts in Asia, Sigg was able to assemble a collection of South Korean works devoted to the theme of the divided country. As always in his extensive activity as a collector, he systematically associated and associates the works, and uses the art to approach a country and its history as well as its state in the present day. With his art collection Sigg tried to gain a better understanding of the tense discrepancy between the two halves of the country and get to know the Korean view of it.

‘We owe the fact that we are able to give our visitors this unique opportunity – an insight into the art world of North and South Korea –to the wide-ranging collecting interests of Uli and Rita Sigg. It is the third major exhibition that the Kunstmuseum has put on in collaboration with the Sigg Collection. This undertaking would not have been possible without them.’ Nina Zimmer, Director, Kunstmuseum Bern – Zentrum Paul Klee

As a complement to the works from the Sigg Collection, a selection of North Korean posters from the Zellweger collection is also being shown. In the 1990s Katharina Zellweger was active in the coordination of humanitarian aid in North Korea, and lived for several years in Pyongyang. She bought the posters on show between 2006 and 2019. The posters are hand-painted in one of the state art studios and used as the basis for printed posters, stamps or postcards.

The Kunstmuseum Bern benefits from the particular relationship that Switzerland has always had with the Korean Peninsula: there has been a very close economic connection with South Korea since the post-war period, and there are common projects in the spheres of science and culture. But there are also connections with North Korea. Since the end of the Korean War in 1953 Switzerland has been involved in peace negotiations, and amongst other things runs military operations on the South Korean border. There is also a very direct, personal connection with Bern: the current North Korean head of state, Kim Jong Un, went to school in Bern for eleven years, disguised as the child of a member of the embassy staff.

Exhibition catalogue
To accompany the exhibition there is a catalogue, 280 pages with 130 illustrations. Alongside a long interview with the art collector Uli Sigg, South Korean authors explore the theme of the border in (South) Korean contemporary art. Selected experts explain the iconography and methods of North Korean art, and explain the ideological function of North Korean socialist realism. The artists themselves also get a chance to speak in interviews. The publication is divided up as an extensive companion to the exhibition, and as well as art-historical essays on the theme includes extensive contextualisations of the exhibited works. Contributors: Nina Zimmer, Kathleen Bühler, Kyong Park, Sunjung Kim, Sunhee Kim, Baum Gong Munn, Min-Kyung Yoon, Wonseok Koh, Carole Yinhua Lu.