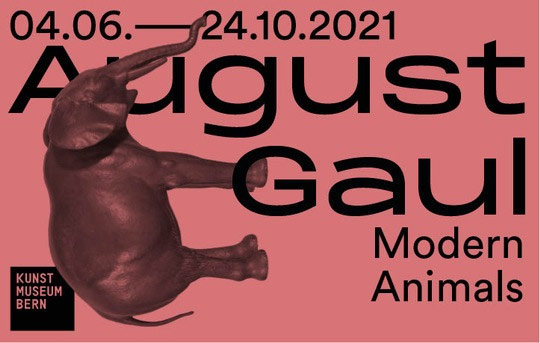 «I make animals because I enjoy it.»
August Gaul. Modern Animals

Animals have recently come to occupy a large part of our consciousness, as transmission hosts of global pandemics, the victims of species extinctions or as contributors to climate change. This topicality invites us to take a new look at the work of the sculptor August Gaul (1869–1921) from the perspective of contemporary debates. The Kunstmuseum Bern, which has one of the biggest and most top-level collections of Gaul in the Zwillenberg Collection, is devoting an exhibition to the pioneer of modern animal sculpture, in which his work is for the first time placed in a cultural and historical context. The exhibition is complemented by a presentation of the Bern Monkey Guild, which celebrates its 700th jubilee in 2021. 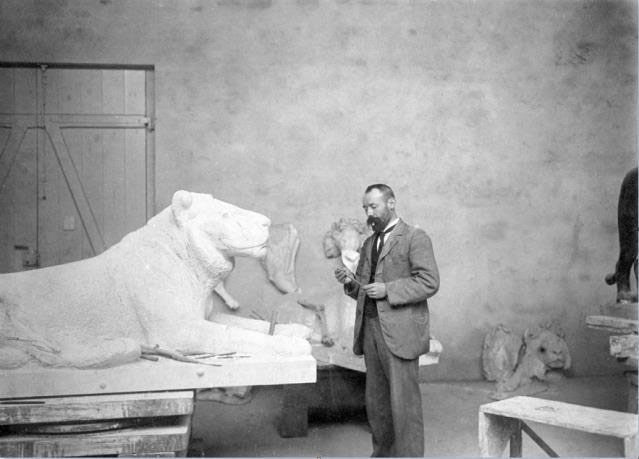 We trade in animals, we consume them as food, we turn them into items of clothing or make them part of our family as pets. Human culture and development is unimaginable without animals. One particular caesura in the relationship between humans and animals, which affected almost all areas of social life, occurred around 1900: farm animals disappeared from the urban space, while at the same time domestic animals moved into bourgeois dwellings, and animal protection and vegetarian movements were founded in reaction to the industrialisation of meat production and animal testing. As a result of the popularisation of the theory of evolution, an understanding of the close kinship between humans and animals became widespread. The fact that this kinship was manifested not only outwardly, but also in terms of 'the psychological', in the feeling and expression of emotions such as grief, joy, rage or fear, further increased interest in animals. 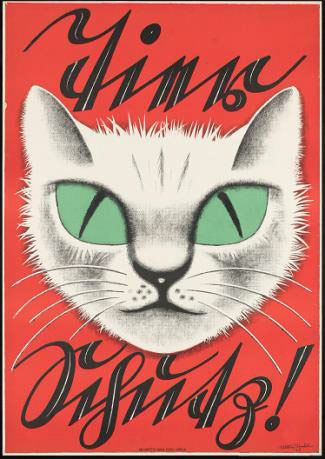 This heightened engagement also made its presence felt in art. Suddenly the animal became an autonomous, fully-fledged motif apart from its integration into narrative or allegorical contexts, such as memorial sculptures.

'The crucial upheavals of the modern world are made apparent in zoo, circus, domestic and farm animals - the rise of the bourgeoisie and the nation state, industrialisation and urbanisation, globalisation and the establishment of modern science,' Katharina Lee Chichester, Curator of the exhibition, explains. 'These developments help to explain how August Gaul, who began specialising in sculptures of animals in around 1900 and thus became one of the most important German sculptors of his time, achieved his resounding success.'

August Gaul: From 'modeller for the art industry' to 'animalier'
In 1888, at the age of just twenty, Gaul had moved from Grossauheim near Frankfurt to Berlin, to complete his training as a sculptor. In a lottery at the School of Applied Art he won a season ticket to the Zoological Garden, where from then on he drew and modelled outside the cages of the animals every morning. In 1899, when he joined the Berlin Secession, founded the previous year, he immediately became a favourite with the public. While the depiction of the human body was bound up with artistic traditions, with the animal motif Gaul was able to experiment freely with abstraction and geometrization, in order to usher sculpture into the modern age. Instead of making spectacular hunting and battle scenes, he showed 'the animal in itself', free from any appropriation by humans.

'I don't want to pedantically imitate nature, but to capture the typical and its psychological core. Above all I want to make a sculptural work (...) What draws me to animals is very much an artistic matter. (...) I make animals because I enjoy it.' August Gaul

Gaul had his artistic breakthrough at the third exhibition of the Berlin Secession in 1901 with his Large Standing Lioness, an unimagined variation at the time of the motif of the male lion, loaded as it was with the symbols of imperialism and power. The public developed a special, almost tender relationship with the animal sculptures, particularly the so-called 'exotic' animals from what were then colonial territories, such as lions, ostriches, elephants, orang-utans or tapirs. The Seated Young Lion, for example, became known as Dusselchen, 'the little dreamer'. Even if Gaul cannot be described as a 'colonial artist' in the narrow sense, his apparently autonomous animal sculptures are not free of a colonial context. 'Exotic' animals were proudly identified in the zoo guides of the time as presents from colonial officials and defeated resistance fighters, and presented to the people in colonial exhibitions; collectors commissioned sculptures of lions, elephants or cassowaries (flightless running birds from New Guinea) as a sign of their global trading relationships. Outside the cages in the zoo, whose orientalist stylistic architectures were aimed entirely at the viewing pleasure of the public and not at all at the needs of the animals, the artist can hardly have observed their much-praised 'natural appearance' and 'characteristic existence'. While Gaul's depictions of 'exotic animals' lack the propagandistic drama of contemporary colonial artists, his sculptures were still embedded within a visual culture which is problematic from a contemporary viewpoint, and which constructed the supposedly 'savage' and 'primitive' as a counter-image to the viewer's own, which was thus supposedly identified as 'civilized' and 'cultured'. 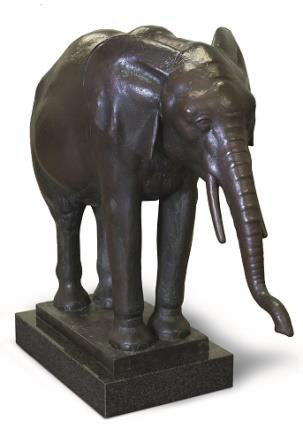 Aside from his preoccupation with 'exotic' animals, Gaul also turned his attention to domesticated animals. This interest falls within the context of the emotionalization of the relationship with animals as pets while at the same time farm and wild animals became alienated. While cattle, sheep and pigs only appeared as commodities in butchers' displays, pedigree certificates for dogs were introduced and training guides published. Animal stories and animal toys became increasingly popular, as did cuddly toys, which were invented in around 1900. As a result Gaul's universe included, alongside lions and ostriches, also cats, hamsters and the family's own donkey, Fritze.

About the exhibition
As an 'animalier' Gaul received much less recognition in art history than his colleagues in the Berlin Secession, such as Max Liebermann, Kathe Kollwitz, Max Slevogt or Lovis Corinth.

'With August Gaul. Modern Animals we are attempting for the first time to place the work of the sculptor August Gaul in a cultural-historical context. Establishing connections with contemporary discourses, we shed new light on the artist's varied oeuvre, and discuss how developments from those times still affect us today, particularly in terms of an ethically sustainable coexistence between humans and animals,' says Nina Zimmer, Director, Kunstmuseum Bern - Zentrum Paul Klee.

The exhibition is divided into seven chapters which address different aspects of the relationship between humans and animals around 1900. The themes extend from the foundation of zoological gardens and natural history museums as illustrations of the new scientific order and the modern subjugation of nature via the introduction of the bourgeois domestic pet and the animal protection and vegetarian movements that began at the same time, the popularisation of the theory of evolution and the accompanying perception of animals as intelligent and feeling creatures through to behavioural research and biotechnology. The exhibition asks how the fundamental changes in the relationship between humans and animals affected the development and reception of Gaul's work, and connects that content with contemporary discourses. Sculptures, drawings and printed works by August Gaul are shown alongside artistic works from his time as well as objects from the history of science and popular culture.

One chapter investigates the extent of the link between the increasing presence of 'exotic' animals in Europe and colonialism and the racial theory that it instrumentalised. While Secession artists such as Max Slevogt, Emil Nolde and Max Pechstein looked at the bodies of so called 'primitive peoples', supposedly untouched by the deformations of modern civilisation, Gaul looked on animals as 'unspoilt', 'authentic' existence. Human and animal bodies thus became the bearers of political, colonial and exoticizing messages.

This chapter is a particularly sensitive one, since it shows colonial contexts of power and different kinds of racism. With comments and a critical accompanying programme, we attempt to unmask these images in reference to their construction of difference and hierarchy and thus discuss their lasting, powerful effect on our thought and our self-understanding. Finding a sensitive approach that makes violent history visible and distancing the power of the images through illumination, without repeating injuries and humiliations, remains an unfinished learning process. This chapter of the exhibition was developed in close dialogue with experts in colonial history and postcolonial theory as well as with anti-racism activists. The path that we have adopted is one of many that were possible in the sense of a work in progress.

Curator | Katharina Lee Chichester
Studied Art History and Biology in Berlin and New York. 2014-2017 on the scientific staff of the Cluster of Excellence 'Image Knowledge Gestaltung' at the Humboldt University in Berlin, within that context scientific assistant to Prof Horst Bredekamp and assistant curator of the exhibition '+ultra. Gestaltung schafft wissen' at the Martin-Gropius-Bau in Berlin. 2017-2020. Doctoral fellow at the Studienstiftung des deutschen Volkes with a dissertation project on art and biology around 1900. 2018 Fellow at the University of St. Andrews, 2019 teaching post at the State Academy of Visual Arts Stuttgart, since 2019 founding member of the DFG network 'Wege, Methoden, Kritiken: Kunsthistorikerinnen 1880-1970' (Ways, Methods, Critiques: Women Art Historians 1880-1970) and co-editor of the volume Kunsthistorikerinnen 1910-1980: Theorien, Methoden, Kritiken (Women Art Historians 1910-1980: Theories, Methods, Critiques) (Reimer 2021).

The Zwillenberg Collection
In the Zwillenberg Collection, the Kunstmuseum Bern has one of the largest and finest quality collections of the works of August Gaul. The works came to Switzerland via numerous detours as the collectors Hugo and Elise Zwillenberg (nee Tietz) made their way into exile in Switzerland. In 1900, the Berlin Jewish business family Zwillenberg-Tietz had begun to assemble their art collection, which included many works by August Gaul amongst others. After marrying Elise Tietz in 1919, Hugo Zwillenberg joined his father-in-law Oscar Tietz's department store business. After Hitler's seizure of power in 1933 the enterprise was compulsorily purchased as part of the 'Aryanisation' programme and renamed as Hertie. The Gaul Collection was moved out of the country along with other art works and furniture owned by the family, and spent the war in the free port of Amsterdam, to which the Zwillenbergs fled in 1939. As a result of this circumstance, along with the fact that the family was constantly determined to keep the approximately 120 figures together, the set of works proves now to be one of the largest preserved Gaul collections. From 1959 the couple's daughter, Dr Helga Zwillenberg (1930-2013) and son Dr Lutz Zwillenberg (1925-2011), who set up the Zwillenberg Foundation in 2012 to maintain their Gaul collection, lived in Bern, where they worked as research scientists. In the summer of 2013, the Zwillenberg Foundation left the collection of works by Gaul to the Kunstmuseum Bern as a permanent loan.