Artistic Splendor of Tudor England to Be Exhibited at The Met 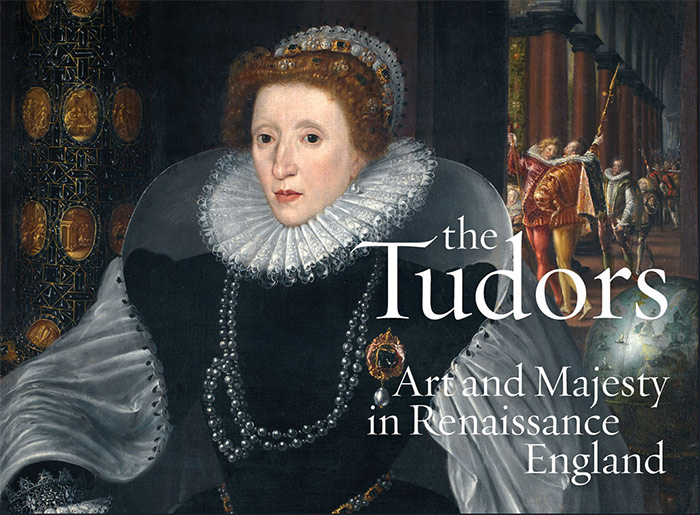 Opening October 10, the first exhibition in the United States focusing on art created during the Tudor dynasty will feature more than 100 paintings, tapestries, sculptures, and more

From King Henry VII’s seizure of the throne in 1485 to the death of his granddaughter Queen Elizabeth I in 1603, England’s Tudor monarchs used art to legitimize and glorify their tumultuous reigns. On view at The Met from October 10, 2022, to January 8, 2023, The Tudors: Art and Majesty in Renaissance England will trace the transformation of the arts under their rule through more than 100 objects—including iconic portraits, spectacular tapestries, manuscripts, sculpture, and armor—from both the Museum collection and international lenders.

It is supported by an indemnity from the Federal Council on the Arts and the Humanities.

The exhibition is organized by The Metropolitan Museum of Art and The Cleveland Museum of Art, in collaboration with the Fine Arts Museums of San Francisco.

“This magnificent exhibition brings the stunning majesty and compelling drama of the Tudor dynasty to life,” said Max Hollein, Marina Kellen French Director of The Met. “By examining the wider political and societal context in which these sumptuous goods and extraordinary portraits were made, we can appreciate both their exquisite beauty as works of art and the complex and often turbulent stories they tell.”

Exhibition co-curator Elizabeth Cleland, Curator in the Department of European Sculpture and Decorative Arts, added: “The sense of majesty that the Tudors crafted around themselves was so successful that, even now, we need to take a step back and remind ourselves just how tenuous their claim to the throne actually was and how many challenges they were facing.”

“English Renaissance literature of this time, particularly the plays of William Shakespeare, continues to be world famous today,” added exhibition co-curator Adam Eaker, Associate Curator in the Department of European Paintings. “This exhibition gives us the opportunity to introduce The Met’s audiences to the stunning visual arts of the period and the ways that both artists and patrons used imagery to navigate the treacherous waters of court life. Rather than an illustrated history of the Tudor monarchy, it offers a fresh look at the incredible figurative and decorative arts made or acquired for the court.”

England under the volatile Tudor dynasty was a thriving home for the arts. An international community of artists and merchants, many of them religious refugees from across Europe, navigated the high-stakes demands of royal patrons against the backdrop of shifting political relationships with mainland Europe. The Tudor courts were truly cosmopolitan, boasting the work of Florentine sculptors, German painters, Flemish weavers, and Europe’s best armorers, goldsmiths, and printers, while also contributing to the emergence of a distinctly English style. This exhibition features works of art made under the patronage of all five Tudor monarchs: Henry VII (reigned 1485–1509), Henry VIII (1509–47), Edward VI (1547–53), Mary I (1553–58), and Elizabeth I (1558–1603). It is organized thematically in five sections within an overall exhibition design that evokes the long galleries and intimate alcoves that defined Tudor palace architecture.

Deriving their power from Henry VII’s seizure of the throne in 1485, concluding the Wars of the Roses, all five monarchs of the Tudor dynasty grappled with crises of legitimacy and succession. Beginning with a spectacular group of Italian bronze sculptures (reunited here for the first time since the 17th century) from a never-completed tomb for Henry VIII, the exhibition’s first section, “Inventing a Dynasty,” shows how the Tudors devoted vast resources to crafting a public image as divinely ordained sovereigns, shoring up their tenuous claim to the throne. A series of portraits will introduce visitors to the five Tudor monarchs; included here are the exceptional loans of Hans Holbein the Younger’s portrait of Henry VIII from the Museo Nacional Thyssen Bornemisza in Madrid and the “Sieve Portrait” of Elizabeth I by Quentin Metsys the Younger from the Pinacoteca Nazionale in Siena.

“Public and Private Faces” spotlights the dominance of portraiture in Tudor painting and the transformative impact that Hans Holbein the Younger (c. 1497–1543) had on the genre. In 16th-century England, portraits recorded status, lineage, piety, and political affiliation, as well as physical appearance. They allowed for physically distant relatives to keep in touch, or for royals to gauge the attractiveness and health of potential future spouses. The emergence of the portrait miniature, intended to be held in the hand or worn on the body, heightened the association between portraiture and intimacy and portraiture’s role in bridging geographic separation. Highlights of this section include Holbein’s portrait of the royal falconer Robert Cheseman, on loan from the Mauritshuis, along with a group of the artist’s portrait drawings in the collection of HM Elizabeth II at Windsor Castle. Also featured is Marcus Gheeraerts the Younger’s elegant portrait of the Welsh aristocrat Ellen Maurice, recently acquired and conserved by The Met.

“Languages of Ornament” illuminates how Tudor arts combined the classical, the natural, and the neo-medieval, forming a uniquely English Renaissance aesthetic. Like other elites of Renaissance Europe, the Tudors were interested in the artistic legacy of ancient Greece and Rome, as seen in the classical whimsy of The Apotheosis of Henry VIII, a drawing on loan from the Victoria and Albert Museum, London. In the decorative arts of 16th-century England, however, this classical tradition was also often blended with a new taste for motifs from the natural world. They drew upon both longstanding conventions of floral symbolism as well as a new fascination with untamed wilderness as a place of liberation. Meticulously woven vines of Tudor and Lancastrian roses, for example, decorate a velvet cope from a lavish suite of vestments commissioned by Henry VII, on loan from the British Jesuit Province. Additionally, elaborate court performances and choreographed tournaments revealed a nostalgia for the Middle Ages—nodding to the Tudors’ shrewd appropriation of King Arthur as a legendary ancestor. Interlacing geometric straps evoking Celtic knotwork and Anglo-Saxon manuscripts flourished in patterning on everything from armor to textiles, like the boldly colored Luttrell Table Carpet from the Burrell Collection in Glasgow.

The exhibition culminates with “Allegories and Icons,” a collection of striking depictions of Elizabeth I, the last Tudor monarch, including the celebrated “Ditchley” and “Rainbow” portraits, on loan from the National Portrait Gallery (London) and the Marquess of Salisbury, respectively. Facing enormous pressure as an unmarried female ruler, the queen exerted tight control over her image. Her carefully vetted portraitists drew upon the elaborate allegories devised by court poets to pay tribute to the queen and her immense powers. As the Protestant Reformation had brought about the destruction or removal of religious images from English churches, most artists focused on investing the monarch—as newly proclaimed head of the church—with an enchanted and sacred authority. At the same time, printmakers created mass-produced images that celebrated Elizabeth as a protector of the Protestant cause. The exhibition concludes with a portrait, from The Met collection, of Henry Frederick, Prince of Wales, a dynamic depiction of the Stuart dynasty that came to the throne after Elizabeth’s death in 1603, ushering in a new age of artistic styles.

The Tudors: Art and Majesty in Renaissance England is curated by Elizabeth Cleland, Curator in the Department of European Sculpture and Decorative Arts, and Adam Eaker, Associate Curator in the Department of European Paintings. Additional support was provided by Sarah Bochicchio, former Curatorial Research Assistant at The Met. The exhibition design is by Senior Exhibition Designer Fabiana Weinberg.

A fully illustrated catalogue will accompany the exhibition. Published by The Metropolitan Museum of Art and distributed by Yale University Press, it will be available for purchase from The Met Store.

The catalogue is made possible by the Diane W. and James E. Burke Fund.

Additional support is provided by the Hata International Foundation and the Samuel H. Kress Foundation.

The Metropolitan Museum Journal, Volume 57 (available January 2023), will feature one of the works in the exhibition: a late-15th–mid-16th century velvet wall hanging adorned with the Tudor rose motif woven with golden thread. The article will detail the conservation and scientific analysis conducted by The Met in preparation for the hanging’s display. The Journal is distributed by University of Chicago Press and will be available for purchase from The Met Store.

The Journal is made possible by a gift from Assunta Sommella Peluso, Ada Peluso, and Romano I. Peluso, in memory of Ignazio Peluso.

The exhibition’s 13-stop Audio Guide will examine portraits of some of the most famous Tudor figures alongside the superb decorative arts produced during the period. The guide will also offer enlivening quotes pulled from primary sources and read by English narrators. It will be accessible online and through a gallery QR code.

The Audio Guide is supported by Bloomberg Philanthropies.

Related exhibition programming will include MetSpeaks: Secrets of the Tudor Archives on October 21, 6:30–7:30 p.m., with author Elizabeth Goldring and exhibition co-curator Adam Eaker. They will discuss recent discoveries in British archives that transform our understanding of Tudor-era artists and their royal sitters. Access programs will include a Met Escapes event on November 15, a Picture This! tour on November 17, and Discoveries workshops on November 20. A Family Afternoon will be held on December 11.

On December 4 at 2 p.m., as part of MetLiveArts’ Sight and Sound series, Leon Botstein and The Orchestra Now will perform selections from a regal score by composer Ralph Vaughan Williams. The selections, adapted by Muir Mathieson, focus on three major figures of the Tudor era: “The Explorer” (Sir Francis Drake), “The Poet” (William Shakespeare), and “The Queen” (Elizabeth I). Tickets are available online.

The exhibition webpage will present four engaging videos highlighting objects from the exhibition. They include a demonstration of the Astronomicum Caesareum (an astrological manuscript used by royalty to map the stars to make critical decisions), a time-lapse installation of a Trojan War tapestry, a short stop-motion animation of Queen Elizabeth I’s locket from the Victoria and Albert Museum, and the dismantling and reassembly of Hardwick Hall’s “Sea-Dog” Table.