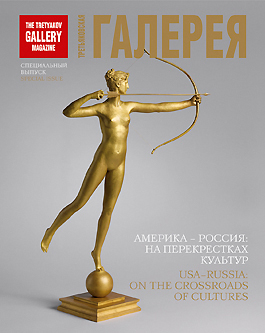 The cultures of Russia and America, as well as the histories of our two great nations, share much in common. The concept to pro­duce a special issue of the Tretyakov Gallery magazine arose as the editors accumulated and published more and more articles about Russian-American cultural ties. The US Embassy in the Russian Federation generously awarded us a grant for the project, which enabled its production-over the magazine's seven year history, we have printed more than 30 articles about the growing cooperation between Russia and America in the field of art. Russo-American ties date back to the 18th century, with cooperation becoming especially close in the sec­ond half of the 19th and the 20th centuries.

Contemporary Americans and Russians have witnessed the heroic feats of our fathers and grandfathers, who were allies in World War II, as well as the ideological confrontation between the two political systems and the time of the "thaw" when mutual dis­trust was overcome and there was eagerness to engage in open dia­logue and work together on equal footing.

The national exhibition organized by the US in Moscow's Sokolniki Park, in 1959, became a landmark event for the Russian public. It presented various American accomplishments in econo­my, science and culture. We saw then for the first time truly modern American art, the works of such brilliant masters as Andrew Wyeth, Edward Hopper, Jackson Pollock, Robert Rauschenberg, Richard Estes, and Andy Warhol. This encounter left an indelible mark on our minds and culture.

Perhaps the "RUSSIA!" exhibition that took place 50 years later at the Guggenheim Museum in New York produced a similar­ly strong impact on the hearts and minds of Americans.

As is well known, the US became a second homeland for many natives of Russia, including artists who introduced to American art the spirit and traditions oflhe Russian school of art, as demonstrat­ed by the artistic legacy of Wassily Kandinsky, David Burliuk, and Nicolai Fechin, as well as works by artists such as Man Ray. Jacques Lipchitz, and Mark Rothko, whose ancestors lived in Russia before the Revolution,

Such crossroads of destinies and traditions give birth to a new 21st-century culture and open new horizons of trust and cooperation. That is the goal of  this special American-Russian edition of the Treiyakov Gallery Magazine.