The 125th anniversary of Vasily Alexeevich Vatagin’s birth was marked in 2008, and proved a good reason to present the master’s work more extensively. The spectrum of his work is broad - illustrations for academic as well as art books, painting, graphic art, lithography, and sculpture. Vatagin (1884-1969) was the author of books about animals for children and adults, a museum space designer, and a teacher. He created a whole gallery of portraits of renowned men of arts and science. It is hard to believe that one person achieved all of this. He made wall-paintings on themes of zoology, paleontology and zoogeography. The State Darwin Museum collaborated with Vatagin since 1908. The museum’s galleries include more than 50 of Vatagin’s paintings and sculptures, and one may say that Vatagin’s works are exhibited in the Museum every day. But the Darwin Museum’s collections hold many more works that have not yet been shown to a mainstream audience. The Darwin Museum, together with the Tretyakov Gallery, has prepared two major exhibitions of more than 150 paintings, sculptures, and works of graphic art. Many visitors, who know Vatagin as a sculptor, will see his large-scale paintings. 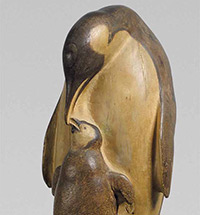 As an artist I admire the animal kingdom - this powerful manifestation of beauty. <...>
As a biologist I admit in an animal a kindred with man and admire the wild force of an animal - the predecessor of man on Earth. As an individual I cannot ignore the great sacrificial role of animals in the construction of human civilization.