"Time of Glory and Elation!"

The Pushkin Museum is one of the first museums to begin the commemoration of the 200th anniversary of the war against Napoleon, this landmark event in Russian history — the Patriotic War of 1812 — with the museum's new project "TIME OF GLORY AND ELATION!". The developments in and around the year 1812 had a special importance for Pushkin both as an individual and as a writer. This age of huge upheaval became for the poet one of the main sources of inspiration and focused his reflection on the destinies of humankind, his motherland and the world. A whole series of his masterpieces in poetry and prose (from the youthful "Recollections about Tsarskoe Selo" to the philosophical "The Commander") directly or indirectly address the era that remains embedded in the memory of almost all citizens of Russia. The circle of his family and friends included many people who had participated in the heroic battles of the Great European War of 1812-1815. 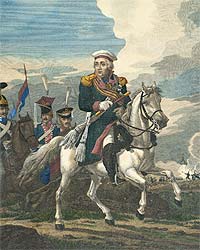 Oh those things we witnessed!
The games of the mysterious sport,
The confused nations darting back and forth;
And Tsars rising and falling;
And people's blood ensanguined the altars
Now of Glory, now of Freedom, now of Pride.
Alexander Pushkin