Nikolai Schilder and His “Temptation”

Admiring masterpieces by the most eminent Russian painters in the Tretyakov Gallery, visitors will not often encounter works by artists “of secondary importance” whose oeuvre was never widely known. Vasily Khudyakov’s “Armed Clash with Finnish Smugglers” and Nikolai Schilder’s “Temptation” prove two fortunate exceptions: for many decades, visitors’ tours of the Tretyakov have begun with this very pair. If Khudyakov, however, is well known to lovers of Russian art, Schilder, whose career as an artist was not altogether successful, would, most likely, have been all too soon forgotten, had his early painting not been purchased by the young Moscow collector Pavel Tretyakov. So who was this Nikolai Schilder, whose name was to become so firmly linked with the history of the Tretyakov Gallery? 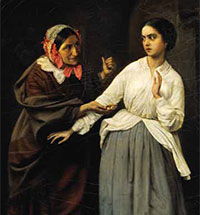 ON THE 175TH ANNIVERSARY OF THE BIRTH OF PAVEL MIKHAILOVICH TRETYAKOV