Museum of Fine Arts of the Republic of Tatarstan

Russian Art in Kazan. THE MUSEUM OF FINE ARTS OF THE REPUBLIC OF TATARSTAN

Encompassing the period from the 15th to the early 20th century, the collection of Russian art is the oldest and most important part of the Museum of Fine Arts of the Republic of Tatarstan. It was formed over the course of a century on the basis of the private collection of Andrei Lykhachev, which was later enriched through donations and acquisitions from eminent citizens of Kazan and art connoisseurs, such as Olga Alexandrova-Heinz, Sergei Bakhrushin, Pyotr Dulsky, Yevgeny Myasnikov and others. 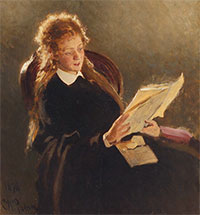 On the 90th anniversary of the birth of Galina Mogilnikova, first director of the Museum of Fine Arts of the Republic of Tatarstan