Some years ago the French critics reviewed the later work by Chagall as being repetitive, decorative and commercial. They placed greater homage and importance on the artistic innovation of his earlier work produced in Russia, and his first visit to Paris (1911-1914). Conversely the public, though, do not share the same opinion. At each successive exhibitions, the majority of viewers appear to universally agree that the later works from the artist's vaste oeuvre are part of a harmogenized continuum which predicate and conclude his entire works. Evidence is partly due to the number of major inclusions of post 1945 works in exhibitions throughout the world. Countries have increasingly demanded a holistic overview of his episodic creative output. Each country receiving a Chagall exhibition relates to it with their own historic and national perogatives. What Chagall does, by radiating his exquisite colour combinations and iconographical elements provides and emphathizes the different needs for the ever changing generations of viewers. Iconographical elements like exuberant flower bouquets, lovers and biblical interpretations are imbued with a universal language of peace, and consequently many diverse cultures find significant reference points in his work. 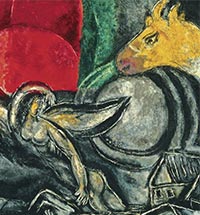 At present it seems to me
Even if I draw back
I go ahead...1