Lipchitz's first solo exhibition was held in 1920 and many have followed since then. After his grand exhibition at New York’s MOMA, retrospective exhibitions have been organized all over the world - at the Tate Gallery in London, in many European cities, as well as in Israel and the USA. Lipchitz's sculptures are eyecatching attractions of many a square and public building, and the artist was decorated with special awards from a number of academies and universities. In 1946 Lipchitz was awarded the Order of the Legion of Honour.

Lipchitz's heritage is carefully preserved in many museums, some of which are world famous, while others are of regional importance, like the University of Arizona Museum of Art in Tucson, Arizona, situated close to the Mexican border. The author of the article, devoted to the unique collection of the sculptor’s work, is Dr. Lisa Fischman, Chief Curator of the University of Arizona Museum of Art.

The Arizona desert offers pleasures both natural and cultural, the latter on a scale that surprises even native residents. While many visitors to Tucson (population 850,000), anticipate the iconic Southwestern landscape - rocky terrain, blooming cactus and brushy wildflowers set against the three mountain ranges that ring the city - few expect the cultural bounty of the University of Arizona Museum of Art. Among the UAMA's superb holdings, glowing like an illuminated jewel, is the Jacques Lipchitz Collection, which provides rare access to the work of one of the most important sculptors of the modern era.

Located on the campus of the University of Arizona, UAMA is a center of education and inspiration. Celebrating its 50th anniversary in 2006-07, the astonishing breadth and depth of UAMA collections belie the institution's relative youth. The holdings survey the whole of art's history, with major strengths comprised by several early foundational gifts and emboldened by dynamic new acquisitions. The C. Leonard Pfeiffer Collection, for example, includes works by important Americans: Isabel Bishop, Edward Hopper, Reginald Marsh, John Sloan, and James McNeill Whistler, among others; as well as renowned Europeans, including Albrecht Durer and Rembrandt van Rijn.

A stellar selection of European paintings, dating from the Renaissance through the 17th century, was the gift of renowned collector Samuel H. Kress. While Kress's generosity was instrumental in the development of many museums throughout the United States, his gift to UAMA was truly extraordinary. In addition to more than fifty other works, the Samuel H. Kress Collection includes twenty-six panels of the retablo of the Cathedral of Ciudad Rodrigo, produced by the workshop of Fernando Gallego in Salamanca during the late 15th century. It is a treasure, not only the most important altarpiece produced by the Spanish master but perhaps the finest example of late Gothic Spanish painting in a U.S. collection.

Over the past decade, new UAMA acquisitions have further developed on the collections' considerable strengths. To wit, expanded holdings of works on paper include an increasingly superb selection of fine prints by European, Mexican and American masters.

In the context of UAMA holdings, the Jacques Lipchitz Collection is unique. Its intensive focus on the work of a single premier sculptor and its chronological range, spanning 1911 to 1971, invites intimate consideration of the artist's innovative methods and varied interests as they evolved over time. Featuring models and dimensional sketches, the collection also includes fully-realized pieces, a monumental sculpture, numerous portrait busts, a large selection of the artist's tools and supporting archival materials. Additionally, a sculpture on long-term loan from the Museum of Modern Art in New York is regularly on view.
Born Chaim Jacob Lipchitz in 1891, to a successful Jewish family in Druskieniki, Lithuania, the artist's life was shaped from birth by a prophecy of greatness. The proclamation of a revered rabbi that the infant "should become a great person," played an instrumental role in Lipchitz's sense of self. As Lipchitz recalled, the rabbi's words "influenced my mother who continuously and repeatedly expressed the feeling that I was born a chosen one, to accomplish a mission, to do great things... and during my whole life I could not escape the feeling that I had a special sense of things — that something miraculous guided my life. I could have died a thousand times or abandoned my work if this feeling had not lived in me." Yet the trajectory toward greatness was not smooth. The artist's early years were marred by anti-Semitism under the Tsarist regime, which restricted Jewish life and prohibited formal education at the St. Petersburg Academy of Arts.1

With the spirit of adventure and determination that would mark his life's work, Lipchitz set out for Paris in 1909, to immerse himself in study at the Ecole des Beaux Arts, the Academie Julien, the Academie Colarossi and the Academie de la Grande Chaumiere. "Gazelle" (1911, plaster), a small, elegant model, reflects this youthful academic endeavour. The earliest example of Lipchitz's work in the UAMA Collection, it is a sketch for "Woman and Gazelles", the artist's first bronze sculpture, completed in 1911 or 1912.

As Alan G. Wilkinson documents in his two-volume catalogue raisonne, Lipchitz absorbed the compelling artistic theories and stylistic trends of the rising avant-garde in Paris during this period. Cubism emerged as a powerful new force; the Italian Futurists were an important contributory presence; and Lipchitz's contact with crucial artist-colleagues, including Alexandre Archipenko, Umberto Boccioni, Raymond Duchamp-Villon, Constantin Brancusi, Juan Gris, Diego Rivera and Pablo Picasso, had a lasting impact. The artist developed a distinctive set of interests, in portraiture, classical myth, biblical themes, the figure, and monuments to human experience — fertile material for the stylistic experimentation and technical innovation that would secure his renown.

Lipchitz is perhaps best known for his groundbreaking Cubist work, dating roughly from 1915 to 1925. During this productive decade, his acumen and experiment with the broken forms and fractured representational strategies of Cubism, modeled in three dimensions, reached an apex. Numerous examples in the UAMA collection attest to the creative originality and spontaneity of the artist's practice during this period.

"Seated Bather" (circa 1916, plaster), reveals Lipchitz's interest in fracturing planes while retaining essential elements of the human form. The piece acts as a prototype for "Bather", (1922-23, plaster painted to simulate bronze), in which flattened angularity is replaced by a more fluid organicism. "Seated Harlequin with Clarinet" (1919-1920, plaster) and (variation on) "Man with Guitar" (1925, plaster), likewise demonstrate the artist's manipulation of a Cubist vocabulary, and his mature stylistic and formal virtuosity.

"Reclining Woman" (1929, terracotta) and "Woman Leaning on a Column" (1929, clay), among others, are evidence of Lipchitz's enduring interest in and varied approaches to the female form. Other important works in the collection — "Leda" (1929, clay), (first study for) "Prometheus" (1931, clay), "Jacob and the Angel" (1931, clay) and "David and Goliath" (1933, plaster) - attest to a new focus on rendering bodies in motion. While small in scale, these models evince freedom from Cubist convention and a turn toward narrative through subjects of human relationship, struggle and redemption.

In 1941, following the German occupation of France, Lipchitz emigrated to the United States, where he worked until his death. A citizen of the 20th century, his work increasingly expressed sensitivities born of personal experience writ large. "Lesson of a Disaster" (1960, bronze), sited on the UAMA outdoor plaza, is a monument to rebirth out of loss. Lipchitz produced the 12-foot, 3,000 pound sculpture in the wake of a 1 952 fire that destroyed his New York City studio and much of his American work. The piece utilizes both organic and architectural elements, and intimates life taking flight from flames. As Lipchitz described it: "There is a phoenix at the top which is feeding a nest of small birds, and the flames are transformed into a blossoming flower... the whole idea had to do with hope and renewal after the disaster."2

Following the artist's death in Capri (Italy) in 1973, his widow, Yulla Lipchitz, generously donated to UAMA 71 plaster, clay and terracotta sketches. The majority arrived directly from the artist's studio in Hastings-on-Hudson, New York, in 1979; by 1980, under the leadership of Dr. Peter Bermingham, UAMA Director (19781999), construction of a gallery designed to permanently showcase the Lipchitz Collection was completed. Following the 2003 death of Mrs. Lipchitz, UAMA — now under Director Charles Guerin — received two important additions, "Man with Mandolin" (1917, marble) and "Rape of Europa" (1969-1970, marble). In 2005, the Lipchitz Gallery underwent extensive renovation, to refresh the presentation and improve access to the collection.

The Jacques Lipchitz Collection at the University of Arizona Museum of Art celebrates an exemplar of Modernist experiment by providing rare access to the inner workings of artistic innovation over time. This is particularly true regarding the many sketches and models in the collection, about which Lipchitz wrote: "I love these little original maquettes. They are so fresh and warm in feeling, not worked out and cooled off. Here I can see my natural capacities. I can sense the periods of struggle and uncertainty and those marvelous moments of lyrical expansion when nothing could go wrong."3

The work of Jacques Lipchitz has been exhibited around the globe and is held in the world's most prestigious museum collections. The University of Arizona Museum of Art is honoured to hold in trust such a rare and precious assemblage, celebrating the lifetime endeavor of this modern master. As the UAMA permanent installation confirms, the sculptural voice of Jacques Lipchitz is vital and enduring, speaking eloquently to 20th century experience and the limitless scope of the creative spirit. 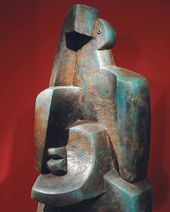 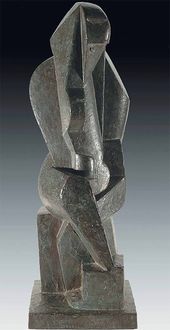 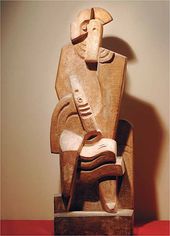 Jacques LIPCHITZ. Seated Harlequin with Clarinet. 1919-20
Plaster. 7 2 by 23.9 by 28.1 cm. Collection of The University of Arizona Museum of Art, Tucson.
Gift of Yulia Lipchitz 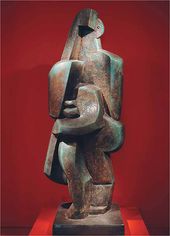 The Jacques Lipchitz Collection Gallery Installation View, Seated Man with Clarinet, 1920
(Plaster), with tools from the artist's studio in Hastings-on-Hudson, New York. Collection of The University of Arizona Museum of Art, Tucson.
Gift of Yulia Lipchitz 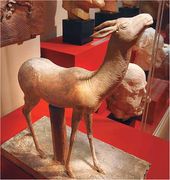 Jacques LIPCHITZ. Gazelle. 1911
Plaster, 47 by 37 by 21.5 cm. Collection of The University of Arizona Museum of Art, Tucson.
Gift of Yulia Lipchitz