The moment Russians learn about the Connecticut colony they immediately associate it with Russia's most famous art colony - Abramtsevo, a village near Moscow. And not only Russians: Jeffrey W. Andersen, director of the Florence Griswold Museum writes: "While the circumstances that gave rise to these colonies are quite different, there are some intriguing parallels... Located on rural 19th century estates and visited by well-established artists who lived principally in cities, Abramtsevo and Old Lyme each contributed, in their respective ways, to a national identity for Russian and American art of its time. Many of the artists of these colonies were interested in portraying the rural landscapes and traditional lifestyles that were so much a part of the history and people of Russia and America. Today, the legacy of these colonies is preserved by museums with extensive collections and buildings, including paintings and objects left by the artists who stayed there.”

There were two major psychological, human and geographical attractions in Old Lyme. The first was no doubt associated with Miss Florence's personality and female charm. We cannot but admire the quiet beauty of her face with her well-marked eyebrows, heavy wavy hair and smiling dark eyes looking at the viewer from the portrait in the image of the Harpist painted by Alphonse Jonghers.

The second is connected with the pastoral beauty of Connecticut which became a source of inspiration and les impressions for all those artists who visited it: the picturesque locations with small towns, rivers and torrents; the Sound itself with coastal zigzags, creating ever-changing perspective views and landscape features; the green of the grass and the foliage of the old trees which reflect the seasonal colours of nature. All of those were there in Connecticut: by no accident was the Old Lyme colony first called "American Barbizon”, and later, with the maturing of French Impressionism, acquired the name of "American Giverny”.

The same is true of the Abramtsevo artists' colony, sometimes called the "Russian Barbizon”, the country residence of the patron of the arts Savva Mamontov, which became the home of the ”Russian Barbizonians.” That is how one is inclined to define
something new against something already known, deja connu: no surprise, then, that Russians might speak about Old Lyme as the American Abramtsevo.

Russian artists too were attracted by the personalities of their host and hostess, Savva Ivanovich and Yelisaveta Grirogievna Mamontov, as well as by the beauty of the typical "middle Russian" countryside. With its picturesque views Abramtsevo was indeed ideal for landscape painting and it became an inexhaustible source of landscape painters' inspiration.

There was a small difference, however: Miss Florence was not rich, while Savva Mamontov was a wealthy manufacturer. Nevertheless, there was a great deal in common - both were great personalities who managed to answer the challenge of their times, whose estates became centres of gravitation that, like a magnet, made artists come and stay. Both in themselves stimulated and created the resulting atmosphere of freedom of self-expression. Both were keenly interested in art, fascinated with art; they felt the necessity of painters' live communication with nature, had a deep inborn or inherited instinct for real art, and a respect for the extraordinary personalities of talented artists.

Quite often the artists were busy with something very far from the "serious": they played the "wiggle game", for example. Or found a very special way to express their gratitude to their hostess, their "patron saint" (as the New York Times called her) - they painted on the walls and doors of the dining room. Childe Hassam painted "Springtime Nudes" on two door panels, while Allen Butler Talcott, Walter Griffin, Henry R. Poore, Carleton Wiggins, Lewis Cohen, Frank A. Bicknell, Jules Turcas, William S. Robinson, Chauncey F. Ryder painted landscapes, and William H. Howe decided to be no less original than Hassam - he painted "Monarch of the Farm". The fireplace was also decorated: here Henry R. Poore made his whimsical mural "The Fox Hunt" in which he depicted, in a humourous way, of course, the twenty four members of the colony. Today the visitor to the Florence Griswold Museum can appreciate and enjoy this lasting record of the hilarious days and leisure hours of the colony.

Many artists who belonged to the Old Lyme colony became outstanding figures in American art and personify American Impressionism. Thanks to their creative activity one can see Connecticut through their eyes. Some - like the three Whites - had a sensational success in Russia where the exhibition of Henry C. White, Nelson C. White and Nelson H. White was held in the Moscow Kolomenskoye Museum.

In such a way do cross-cultural ties bring people together - on the crossroads between Abramtsevo and Old Lyme. 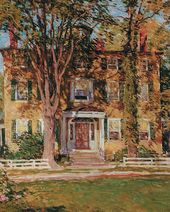 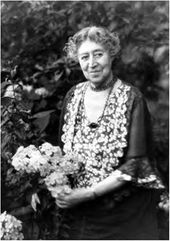 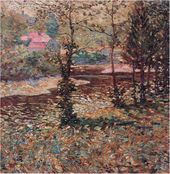 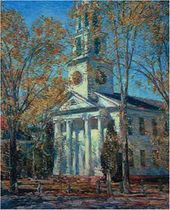 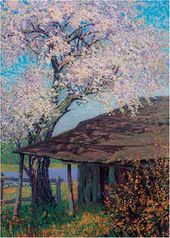 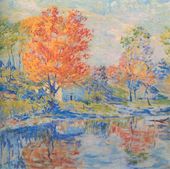 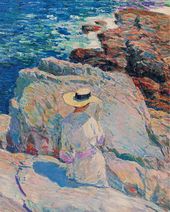 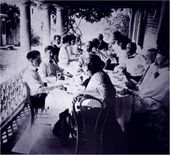