The canvases that he produced during the second French period, from 1923 to 194 1, which include his exile in the United States, were marked by the same ambivalence. Certain works had all the appearance of surrealist influences, but this is not the case. The spectacular Nu au-dessus de Vitebsk (Nude above Vitebsk) of 1933, which holds, in effect, more of an autobiographical, narrative revelation than of a surrealist dream. In this painting, the nude is treated in a manner which became more of a return to an earlier order of the early twenties in France. The polished style and the quality of the design shows a consummate academic exercise understanding the long tradition of nude painting viewed from the back, apart from his grappling, arbitrarily beneath the urban landscape. But this arbitrariness is not an overt "surrealist" aspect of the work (it is reminiscent of the painting of Man Ray, A l'Heure de l'observatoire, les amoureux (Time of Observatory, The Lovers) of 1932-1934).

Chagall, in reality, speaks of himself. Vitebsk, and probably Bella, were reunited to equal status, each sharing a part of the painting. Vitebsk in the lower half of the work, belongs to the past. Bella above as she appears in the present and emerging from the world of memories. One can see in the bouquet of flowers, isolated and sharpened by the colours on the grey depths, an image of Chagall himself, a signature and an emblem. The flowers are sometimes self substitutes during the years which followed his settling in France, and become self portraits. Such bouquets are used as symbols for the artist, but elsewhere there are clowns, acrobats or musicians. Perhaps, he calls into mind in the paintings an allegorical image of past happiness or present pleasure. The latter is the case in La Mariée a double face (Fianc̀ée with Double Profile) completed in 1927.

But the painting which clearly manifests this ambivalence with surrealism, undoubtably is Songe d'une nuit d'été (Midsummer Night's Dream) of 1939. The couple of ass and bride appears in effect rather "surreal" and en- lives the fantasy. The title refers us to one of the most perfect comedies of Shakespeare, which evokes the lovers Titania and Bottom, the latter having metamorphosed into an ass. In Shakespeare, this metamorphosis is possibly a transposition of classical souvenirs (Midas, whom having offended Apollo was given asses ears. Circe the enchantress, who transformed men into beasts and metamorphosed Lucius Apuleus into an ass in L'Ane d'or). Perhaps this animal human dicotomy was drawn from popular masquerades of his time. The world of fairies also coincided with literary souvenirs (Titania is the name that Ovid, in the Metamorphoses, gave once to Diane) and the Nordic mythological souvenirs (the personality of Puck was derived from the domestic imp, like Robin Goodfellow). This allegorical mix allows the play to stage a confusion of stories where we come to believe in the light of the moon, beauty and the beast, the grimace and the smile, dreams and the desires, contained with an atmosphere of a nocturnal fairyland. No doubt Chagall had taken pleasure in this permanent invention of a friendly supernatural, in this unreality of situations which marked the victory of the irrational and imagination, over prosaic rationality. His painting exuberantly illustrates the themes of the play and the banter of fairytale romance. The tender aspect that he gives to his personalities and the absence of complete bestiality rejoins the Shakespearean text which evokes the buffoonery and richness of loving. There is no bitterness in Shakespeare in this derision of fairytale romance which is also in the case of Chagall. The red angel in the sky, very unusual for Chagall, is most certainly a transposition of the personality of Puck represented as a benevolent goblin. Once again, Chagall recalled or, more precisely, reveals his pleasure in reading this great reverie.

In the years which followed his return to France, after the war, other works maintained this ambivalence which encouraged Chagall to use "surrealist" imagery. La Pendule a l'aile bleue (The Clock with Blue Wing) is an example of this. The clock in the centre of the image, with a bird's wing, seems to dominate the snow bound village. The rooster beneath, in a estranged atmosphere, the abandoned bouquet at the bottom of the scene, the couple intertwined superimposed on the clock and the silhouette of the wandering Jew, as well as the enigmatic title, is reminiscent of certain arrangements from Magritte. It is true that this work emits a strange atmosphere, but moreover it is a work which one must decode, as one deciphers an encoded message. Each one of these figures, in one manner or another, relates to Chagall, but each one relates to a different history. The one evokes a memory of childhood, the other speaks of exile, the third one speaks of personal melancholy. They are akin to theatrical personalities who are aware of each other on the stage, but cannot communicate amongst themselves. Assembled in the same space, each one speaks, but is oblivious of his neighbours discourse. The organised cacophony which follows as if we are at the theatre, translates itself in the space in the painting by an intense disorder of representation. That so the laws of conventional perspective are inverted, the laws of gravity abolished and the natural order of things disturbed by the invasion of the winged clock. But we are familiar with these actors in the painting. There is the clock which appears for the first time alone in a 1914 painting that one recalls when seeing this painting (in Le gant noir (The Black Glove) or in L'Autoportrait a la pendule (Self-Portrait with Clock) of 1947). There is the rooster, a familiar bestial Chagall-animal and evitably the omnipresent landscape of Vitebsk. From which the rooster and the clock originates. Theyare akin to the wandering Jew, memories of infancy and of youth, materialising in such figures. There is, an arbitrarily pasting the figures upon the landscape — often which forms an alliance with the play, devoid of malice nor humour. Usually Chagall synthezised interpretations of his work which suggest a surrealistic evocation that was both realistic and resonant of numerous personal memories.

The distortions that Chagall invented with regard to the cannons of classical representation (i.e. the differences of scale and incongruous comparisons) does not mean that he wished to deconstruct the painting, nor wish to let the imagination or the unconscious speak alone, as with the surrealists, but within the application and construction of the work, it is a sentimental logic which plays with perspective. In other ways it is a reassem- blance of reason. With Chagall, the affectivity devises its own codes of representation and his own multivalent aesthetic. 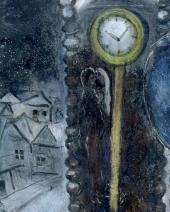 The Clock with Blue Wing.
Detail 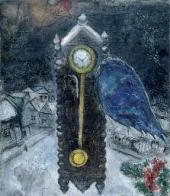 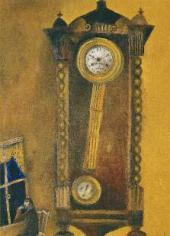 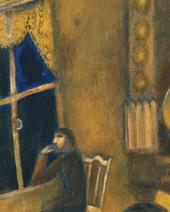 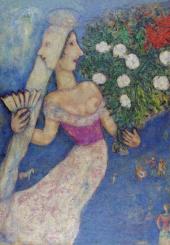 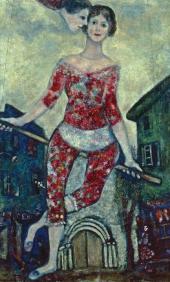 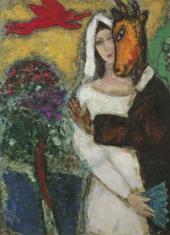 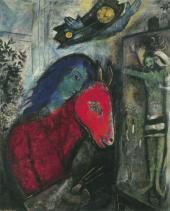 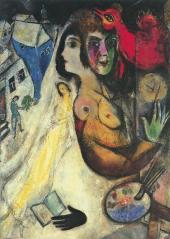