1907-1908
Joined the School of Drawing attached to the Imperial Society for the Promotion of Fine Arts, directed by Nikolai Roerich.

1909-1911
Enrolled at the Zvantseva School of drawing and painting, as student of Leo Bakst. He made the acquaintance of Bella (Berta) Rosenfeld.

1911-1914
On a scholarship offered by Max Vinaver, in May 1911 Chagall went to Paris to study. He settled at La Ruche, and entered the circle of avant-garde painters and poets.
His works were displayed at the Salon d'Automne and at the Salon des Independents. His first major solo exhibition took place in Berlin at Herwarth Walden's gallery “Der Sturm” (June 1914).
He left Berlin for Vitebsk.

1914-1915
Chagall worked on pictures and drawings which would make up the “Vitebsk Series”. He married Bella Rosenfeld on July 25 1915. In September he left for St. Petersburg, where Chagall entered alternative military service at the Central Bureau for War Economy.

1916-1917
Chagall joined the Jewish Society for the Encouragement of Fine Arts.
On May 18 1916 the Chagalls' daughter Ida, was born. Solo exhibition at the Nadezhda Dobychina Art Bureau. In December 1917 the whole family left for Vitebsk.

1918-1919
Appointed Commissar for Fine Arts of the Vitebsk province. Opened the Peoples's School of Arts in Vitebsk, heading a free painting studio.

1920
In June, after a conflict, Chagall left Vitebsk for Moscow. In November, on the recommendation of Abram Efros, he received an invitation to work for the Moscow State Jewish Chamber Theatre. The last 40 days of the year were devoted to work on a series of seven painted murals for the hall, and also on costumes and sets for the “Sholem Aleichem Soiree”.

1921
Lived and taught drawing at the “Third International” Jewish School- Camp for War Orphans at Malakhovka near Moscow.

1922-   1923
In the Summer of 1922, Chagall left for Kaunas (Lithuania) to exhibit his works, later departing for Berlin.
In September 1923, on the invitation of Ambroise Vollard the Chagall family left for Paris.

1928
Chagall's works were shown in Moscow as part of the Modern French Art Exhibition.

1930-1931
Ambroise Vollard commissioned Chagall to illustrate the Bible. He visited Palestine, Syria and Egypt. “My Life” in Bella Chagall's French translation was published in Paris.

1933
At the “Cultural Bolshevism” exhibition organized by the Nazis in Mannheim, the works of Chagall and other artists were publicly denounced.

1935
Chagall went to Vilna in Poland to address the Congress of the Institute of the Yiddish Culture and Language.

1937
Naturalized as a French citizen.

1940-1941
The family moved to Gordes, a town on the bank of the Loire. Received an invitation from the Museum of the Modern Art in New York to settle in the USA. In June 1941 the Chagalls arrived in New York.

1942
Designed the sets and costumes for the ballet “Aleko” for the American Ballet Theatre.

1943
Chagall had a meeting with the So- viet-Jewish actor Solomon Michoels and the poet Itzik Feffer, who came to the USA as members of the Soviet Jewish Anti-Fascist Committee.

1946
Lived in the village of High Falls, in the northeast of New York state.

1947
Returned to France, to settle in Orgeval. Solo exhibition at the Musee National d'Art Moderne in Paris. Eugene Teriade published “Dead Souls" with Chagall's etchings; for these engravings Chagall was awarded the Grand-Prix at the 24th Biennale in Venice.

1950
Moved to Vence in Provence.
From that time onward for some 20 years Chagall mastered new artistic media, including ceramics, mosaics, tapestry and stained-glass. He began to work on monumental paintings inspired by the Bible.

1951
Attended the openings of his solo exhibitions in Jerusalem, Haifa and Tel Aviv.

1958-1959
The Paris Opera commissioned Chagall to design the sets and costumes for the ballet “Daphnis and Chloe” by Maurice Ravel and Mikhail Fokine. He worked on a mural for the foyer of the Frankfurt-am-Main opera theatre. Elected an honorary member of the American Academy of Arts and Letters.

1960-1961
Worked on stained-glass windows for the Jerusalem University.

1963-1964
At the invitation of Andre' Malraux, the French Minister of Culture, Chagall painted the panels for the ceiling of the Paris Opera house. Went to the United Nations headquarters in New York to work on the stained-glass windows dedicated to the memory of Dag Hammarskjold.

1966-1967
Moved to Saint-Paul de Vence, a village near Vence where he would live to the end of his life.
The Metropolitan Opera in New York commissioned Chagall to paint murals for the Opera house lobby, as well as sets and costumes for Mozart's “The Magic Flute”.

1968-1970
Executed stained-glass windows for cathedrals in Metz and in Zurich, as well as mosaics for the University of Nice and for public buildings in Jerusalem. Foundation of the Musee National Message Biblique Marc Chagall in Nice.
The Grand Palais in Paris organized the major retrospective exhibition “Hommage a Chagall”.

1973
In June at the invitation of the Soviet Ministry of Culture Chagall went to Moscow and Leningrad. Chagall's exhibition was organized in the Tretyakov Gallery. Donated his works to the Tretyakov Gallery and to the Pushkin Museum of Fine Arts.
The opening ceremony of the Muse'e National Message Biblique Marc Chagall in Nice was held in July.

1974-1977
Executed stained-glass windows for the Cathedral in Reims. “Ulysses” by Homer and Shakespear's “The Tempest” with Chagall's lithographs were published. Awarded the Grand-Croix of the Legion of Honour, France's highest award.

1981
Donates four books with his illustrations to the Hermitage Museum in Leningrad.

1985
The final exhibition in the artist's life-time was organized by the Royal Academy of Arts in London (February and March).
Chagall died on March 28 at Saint- Paul de Vence at the age of 97. 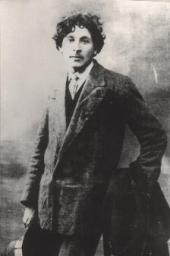 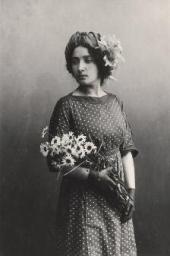 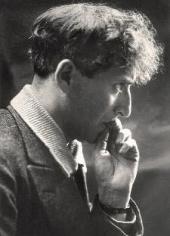 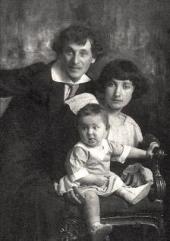 Marc Chagall and Bella with their daughter Ida.
1917 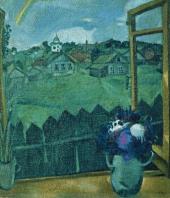 View from the Window in Vitebsk (Window. Vitebsk). 1908
Oil on canvas mounted on cardboard. 67 by 58 cm. Private collection, St Petersburg 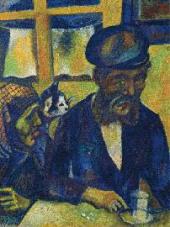 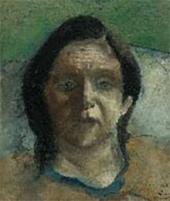 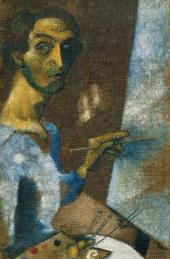 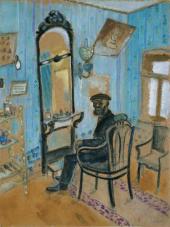