THE SECRETS OF IVAN POKHITINOV’S ART*

Throughout Pokhitonov’s life in art, the mystery of his painting techniques eluded not only the general public but many of his friends as well. Vasily Baksheev called Pokhitonov’s art “magic”. “In most painters’ works you see how it is made, you figure out the know-how, while Pokhitonov’s pictures are unfathomable: he daubs away, he scrapes off, then daubs again. And everything is alive and breathing. He is indeed a sorcerer”1. Repin echoed Baksheev: “...there is no way to figure out how he paints: he scrapes off, then paints over again. A sorcerer!”2

Two of Pokhitonov’s paintings, reviewed in this article, help to partially illuminate the secrets of his creative methods and the origins of the ideas for some of his pictures. One is “A View of Bougival”, which was submitted for authentication to experts from the Tretyakov Independent Art Authentication insititution after the opening of the anniversary show.3

The investigation of its stylistic and technical details, confirmed Pokhitonov’s authorship, revealing resemblances in composition, palette and brushwork. The research findings suggested that “A View of Bougival” was created in the late 1870s-early 1880s.

This scientific analysis revealed the complex structure of the layers of paint, which lack the homogeneity usual for an artist in the process of work on a single painting. In Pokhitonov’s picture, each of the planes was created using different techniques - the artist re-fashioned the planes at different periods, using different methods for each. At the start, he outlined the composition of the landscape with quill and ink over the priming. Then the outlines were mostly painted over but remained in some places - in the delineation of the river and the roofs of the houses. The paint layer in the foreground was scraped away almost down to the priming, then the lines of the fencing were traced, with a tool akin to a comb, over fresh, still wet paint; then the artist used tools with pointed tips to scratch on paint, also wet, the lineaments of grass-blades in the foreground. The structure of paints in the background is different. The lines of the aqueduct were pencilled over the upper layer of paint. This detail of the landscape was re-worked several times. In the meantime, the painting techniques used in this segment of the picture are not markedly different from those found in other of the artist’s main works - in other words, “A View of Bougival” was re-worked by the artist himself. The tests by the BSM showed that the artist worked in several stages in crafting the sky as well - the lower layer contains darker grey-and-blue tints, the upper layer - lighter hues of soft turquoise.

It became obvious that “A View of Bougival” reveals Pokhitonov’s method in detail, about which Baksheev had said: “he daubs away, he scrapes off, then daubs again”. But the question remains as to why others of Pokhitonov’s works cannot serve as models? Why did the painter’s method remain so secret? The reason may be this: “A View of Bougival” is one of Pokhitonov’s earliest works, created in the late 1870s-early 1880s, when he was also earnestly working to develop his individual style.

Preparing the “The Artist-Sorcerer” show, the researchers looked again at the records from the Tretyakov Gallery’s department of manuscripts, which shed light on the origin of the idea for another of Pokhitonov’s pictures, “Road above the Sea”, which has two signatures: cyrillic “И. Похитоновъ” with a flourish, and latin “I Pokitonow”. The artist usually signed his works in this fashion when he intended to exhibit them and offer them for sale both in Europe and in Russia. The painting “Road above the Sea” was analyzed at the Tretyakov Gallery and confirmed Pokhitonov’s authorship as well as the authenticity of his signatures. The picture has that nacreous brilliance of colours which makes it possible to call Pokhitonov a master of “tender, opalescent placidity of colour design”.

The composition of the painting, typically for Pokhitonov, is simple and clear. The distant shore is balanced against the big rose bush in the foreground, next to which, against the backdrop of the sea, there is the figure of a girl in national costume, a basket in her hand, walking along the seaside road. Comparative analysis has suggested that the painting was created in the 1880s or early 1890s. Pokhitonov’s authorship was incontestable, and yet questions lingered about the origin of the idea. Why was the girl depicted in such a sharp ethnographical manner? Researchers had never before come across anything like this in the course of their analysis, or simply observation, of Pokhitonov’s paintings held in private collections and museums. The artist’s letter from Liege to Pavel Tretyakov of January 20 1896 sheds light on the puzzle. It reads: “You may have heard that the late Emperor trusted me with the task of painting views of our old cities, monasteries and historical landmarks in general, leaving the choice of suitable subjects entirely at my discretion. Accepting this engagement <...> I would select distinctive local types
and local ethnic costumes - to make them to some extent interesting ethnographically as well. <...> I eagerly looked forward to the work ahead of me and was preparing to commit myself entirely to it”4. And it can be assumed that “Road above the Sea” was created as a preparatory work. In the same letter to Tretyakov, Pokhitonov wrote: “Regrettably, due to all manner of family troubles, I am prevented from taking on this assignment, but the idea to try something like this has taken hold in my mind and appears so tempting that I don’t want to relinquish it without trying my luck in a different place. And there is no other person to try this luck with but you, Pavel Mikhailovich”5.

Thus, the reviewed work may have been one of the pictures the artist accomplished just “to try something like this”, but also in conjunction with the same Tsar's offer. In August of the same year Pokhitonov sent to Moscow five boxes with “20 small murals”, among which only the sketches “A Basque Woman at the Border of France and Spain” (Pokhitonov called them “studies”) recall the preparation for the planned paintings. All of the pieces he sent were acquired by Tretyakov in the same year and now are held at the Tretyakov Gallery. The “Road above the Sea” is the only evidence of the artist’s unfulfilled plans. Since in the 1880s Pokhitonov lived mostly in France, and from 1893 in Belgium, the “ethnographically interesting”, “distinctive local type” was identified by subj ects wearing the national costumes of those countries.

It should be added that the catalogue of the third exhibition of sketches, drafts and drawings organized in Petrograd in December 1916 lists under No. 326 Pokhitonov’s piece “On a Narrow Road”. Unfortunately, the catalogue neither contains a print of the piece nor references its size, but we can only think that it was the painting under review here, which, fortunately, remained in Russia. But that is a matter for a different investigation altogether. 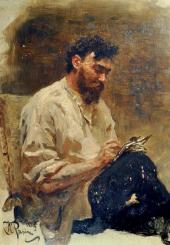 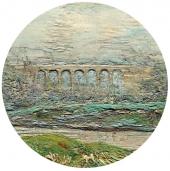 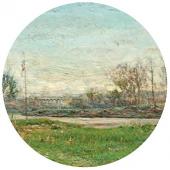 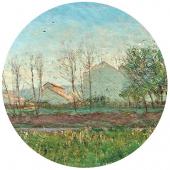 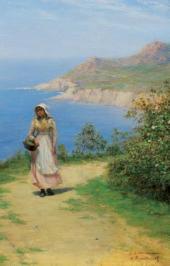