IN 1875, TWO YEARS BEFORE IVAN POKHITONOV'S ARRIVAL IN PARIS, A VENTURE CALLED THE “PARIS CERAMICS WORKSHOP OF RUSSIAN ARTISTS"1 WAS SET UP; IT WAS ESTABLISHED ON THE INITIATIVE OF ALEXEI BOGOLYUBOV IN A SPACE RENTED FROM AN INDUSTRIALIST CALLED GILLOT, AND IT WOULD CONTINUE TO OPERATE UNTIL THE EARLY 1880s. PARTICIPANTS INCLUDED MANY RUSSIAN ARTISTS LIVING IN PARIS2, FOR WHOM THE WORKSHOP WAS ONE OF THEIR SOURCES OF INCOME OUTSIDE RUSSIA (THEIR STIPENDS FROM THE ACADEMY OF FINE ARTS WERE INSUFFICIENT TO COVER ALL NECESSARY LIVING EXPENSES). THE ARTISTS IN ONE SITTING APPLIED IMAGES TO FINISHED PLATES AND DISHES WHICH WERE THEN HEATED IN A KILN AND SOLD. THE VENTURE ATTRACTED THE ARTISTS FOR ITS NEW CREATIVE OPPORTUNITIES.

Ilya Repin wrote to Vladimir Stasov about the workshop: “We’re all into ceramics now, painting on lava rocks and plates; very fascinating, things can turn out beautifully, and most importantly, they are so hard after the kiln; it would be good to use the method in outdoor painting and for painting in those places where it deteriorates soon and where it’s replaced with elephantine, garish mosaic. After all, a good artist can paint on a lava rock vividly, lightly and gracefully. What a lovely method! Do you remember dishes and plates by Angelo [Asti], in the Deck store across the street from the Grand Opera? That’s delightful! Imagine a whole frieze painted in this manner!

“A Russian artist Yegorov (son of the famous Yegorov3) has been working here for two years and knows the technique; his wife works too. Bogolyubov fell for pottery and painted many plates, several of which are just magnificent. Now he’s doing all he can to have ceramics replace mosaic completely. The ceramic method is as quick and easy as fresco, so it will be less expensive; besides, the objects will be original, and not copies as they usually are in heavy mosaic.

“I tested the water with <...> Polyakov4, who donated 1,000 francs for the initial expenses, we rented a shared workshop and formed a society of painters on lava rocks (as usual, for fear of being left high and dry, we roped in donors offering them honorary membership, to pay for the workshop’s expenses. These members have been promised bonuses - painted pieces of pottery).

“Yegorov is working relentlessly to find two or three lads and to teach them this art here; when the lads return to their villages, where they ply this trade, they would teach their fellow potters and show them examples of good taste5”. Repin wrote about his work at the Ceramics Workshop to the Academy’s secretary Pyotr Iseev: “I finished several Russian historical characters (on plates) and folk figures, they are being snapped up like hot cakes, recently the buyers very nearly had a scuffle over one Finn I depicted on a plate (Makovsky separated them). And now Yegorov (the studio’s head) for three days in a row has been pining over a small dish on which I fancied to picture Ivan the Fool, the sort of image you come across in our every village and every city. The number and quality of the images are growing at incredible rates; as for the number, the store shelves are groaning under the weight of the wares, and as for the quality, even the French have begun to appreciate [it].”

In Repin’s opinion, dishes and ceramic panels with Alexei Bogolyubov’s landscapes were marked by their special subtlety and fineness of style. “Bogolyubov produced several astonishingly good pieces. We should give him his due, his images embellish the workshop and lift the art of ceramics to a high level.” Celebrating the advent of the New Year 1876, the artists decided to present Bogolyubov with a big plate painted by Repin, Vasily Polenov, Nikolai Dmitriev-Orenburgsky, Alexander Beggrov and Konstantin Makovsky. The plate’s rim carried the inscription: “To our beloved Alexei Petrovich Bogolyubov goes this first ‘pancake’6 [meaning first attempt] from his young friends”.

Like Repin, Polenov enthusiastically took up pottery painting. A friend of the Polenov family, Fyodor Chizhov, wrote in his diary on 11 September 1876: “Vasya brought excellent pieces he made7 - mostly drafts... Excellent dishes and faience plates, now coming into fashion - artists paint entire compositions on them using some new technique and then put them into the kiln. He has several such objects, and all are very good”8.

Bogolyubov’s memoir about the workshop’s activities read: “Ilya Repin and Vasily Polenov, and then Villie9 and Pokhitonov10, proved to be the best artists”. The studio was very popular in Paris, its objects often acquired direct from the kiln. That explains the fact that museums and private collectors in Russia today hold only a handful of pieces. So it was all the more gratifying that Pokhitonov’s exhibition at the Tretyakov Gallery in 2010 featured for the first time six plates with the artist’s images and signatures (from a private collection in Moscow). Unpretentious, with simple clear story-lines, these pictures - “On a Forest Road”, “Two People in a Boat on a River”, “A Forest Stream”, “A Ship at Sea”, “Fishermen on the Seashore” - are representative of the mastery of Pokhitonov’s early landscapes. 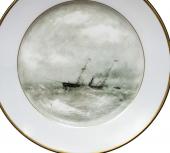 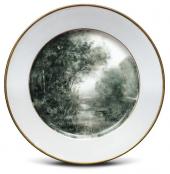 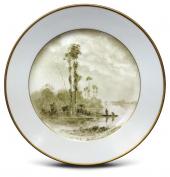 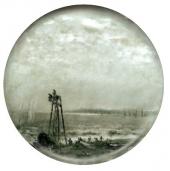 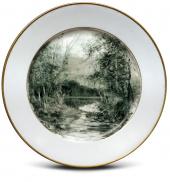