IVAN POKHITONOV STAYED AS A GUEST AT LEO TOLSTOY'S YASNAYA POLYANA ESTATE FROM 14 JUNE TO 5 JULY 1905. IN LETTERS TO HIS COMMON-LAW WIFE, YEVGENIA WULFFERT, HE WROTE ABOUT HIS IMPRESSIONS OF THE VISIT, HIS MEETINGS WITH TOLSTOY AND TOLSTOY'S WIFE SOPHIA ANDREIEVNA, AND HIS WORK DURING THE STAY.

From the repeated complaints of his relatives we know that Pokhitonov was not a good correspondent: fulfilling his duty to keep his family informed about his circumstances, he often did nothing more than send brief cables. Considering this, his letters to Yevgenia are all the more valuable.

Pokhitonov’s letters to Yevgenia Wulffert were found in Paris by Ilya Zilberstein. Unfortunately, we do not know the whole story about this discovery, but we are confident that this find, like the others, involved one of those fascinating adventures that happened so often in the course of the scholar’s life. The only piece of information we know from Zilberstein himself is that in 1963, when the Tretyakov Gallery was hosting Ivan Pokhitonov’s solo exhibition, he met the artist’s youngest daughter Zoya Ivanovna Markevitch1. She told him that she had once held Pokhitonov’s entire archive, but that it was lost during World War II. Yet, when in 1966-1967 Zilberstein travelled to Paris, it transpired that parts of the archive had fallen into the hands of different people, changed owners - and, most fortunately, survived. The numerous Russian cultural treasures discovered by Zilberstein in France included the letters Pokhitonov wrote to Yevgenia Wulffert when he was Leo Tolstoy’s guest at Yasnaya Polyana. Other surviving items found among these papers included Tolstoy’s photograph with his hand-written dedication to the artist, as well as Sophia Tolstaya’s letter she later sent to Pokhitonov together with photos presumably featuring him with the writer, and different images of Yasnaya Polyana.

Zilberstein published the letters in “Ogonyok” magazine in 19782 along with materials he had found in different museums and archives. These materials include information about Leo Tolstoy’s and his family members’ impressions from Pokhitonov’s visit and details of their conversations.

Pokhitonov’s missives to Yevgenia Wulffert astonish the reader with their detailed and painstakingly careful description of everything he saw during the trip, the record of his feelings, the subtlety of psychological characterisations of the people around him, the circumstantial account of conversations with them. This is how he describes his impressions when he first met Tolstoy: “With youthful sprightliness Lev Nikolaievich stood up to greet me. ‘I’ve known about you for quite some time, ’ he began after the usual welcome. ‘The late Turgenev told me a lot about you. Are you a hunter? He was forever talking about your woodcock. You made a woodcock picture, didn’t you?’ Barely a minute had passed before my recent anxiety dissipated without leaving a trace. As if my interlocutor was not Lev Nikolaevich, not Tolstoy the genius, this eagle from Apukhtin’s poem who soars ‘easily and freely over the earth’, but the kind of common, ordinary person I’ve known for long.

“I’ve heard often from people who knew Tolstoy personally that he was simple and accessible - the qualities my coachman had talked so much about. Probably all those who had a chance at least once to behold ‘the great writer of the Russian land’ noticed this particular trait before all others. Although I was already prepared for it, this characteristic particularly amazed me. This is not just simplicity - this is clarity, almost transparency! You see instantly the person such as he is in reality;you feel that no one and nothing can make him cast aside these moral qualities - this blouse which without any constraint, freely and aptly drapes his spiritual self, ‘concealing not a slightest curve of this soul’. Not without reason Lev Nikolaievich clothes his body in a plain linen costume -1 find it symbolical. As I write this to you, I’m reminded about his ‘Confession ’ - only a person such as Tolstoy could have written it3.”

Two days after his arrival at Yasnaya Polyana, Pokhitonov wrote to his wife: “I don’t remember a single instance in my life when I, for the first time meeting a person who interests me for any reason, thought so little about what sort of impression I’d produce on him, as now is the case. Tolstoy was so simple, so homely, so ordinary - that’s how I would formulate it if he were some other man and if his personality were not suddenly evoking that of the late Turgenev - a certain variety of intelligence to which you submit yourself as the resume of your own logic would after long and arduous brainwork. He has the appearance of a Russian peasant whom you meet at every turn, although the blouse and the light wide-brimmed hat weaken this likeness, and watching him in this outfit I think this is probably how the Quakers in America or the Boers in Africa look, especially when Tolstoy is mounted gracefully and slightly sideways on a lean flame- coloured horse4.”

Pokhitonov told his wife about his work routines in Yasnaya Polyana, the tenor of life there, the visitors to the estate: “For starters, I set to work at seven in the morning and work until five every day, including morning tea, breakfast [early lunch] at noon and tea at three, I’m working long and hard because I have started three pieces at once. And the rest of the time, apart from the interest caused by the aristocratic couple, nearly every day there are 20 people or so seated at a table, with most of them interesting not only in relation to the hosts but individually as well - for instance, the 57-year- old Natasha from ‘War andPeace’5, Dolgorukov, members of the last delegation sent to the Tsar and so on, and on top of everything else, there is a huge gypsy camp in Yasnaya Polyana, and all of us in the evenings repair to them to watch their dances (like Spanish dances at the show in Paris) and to listen to their weird but wonderful singing... Come day, go day, and you’re so spent that all you can do is undress yourself and lie down. Today I’m having a respite because my hosts are totally out of sorts6.”

Pokhitonov’s letters not only convey the atmosphere in the great writer’s home and portray his character traits and different aspects of his view of the world, they also, very importantly, highlight the artist’s feelings towards the recipient of his letters, his dear Nyutik or Nyunka, as he affectionately called his wife. Reading these letters, one cannot fail to see that they are addressed to a person who loves and deeply understands him and has the ability to share with him joy and grief. In one of his letters he confides to his wife: “Once, on the second or third day of my visit, at 11 at night the Countess told me: today Pavel Ivanovich [Biryukov, Tolstoy’s friend who was writing his biography] told me in confidence that Levushka asked him to write about how happy he had been with me and how I’d been able to make up for everything his nature lacked; thus pleasantly impressed, I want to please you too and tell a bit of a gossip. Yesterday, when I and Levushka went to bed, he told me: I’ve rarely met a person so nice as this Ivan Pavlovich, and besides he appears very intelligent. There now, Nyutik, take note of this because you have no moustache to wrap this piece of knowledge around.7” Zilberstein in his article quotes an entry from July 5 in Dushan Makovetsky’s8 diary: “In the morning Pokhitonov left for Namur, Belgium, where his son is9. Pokhitonov stayed for three weeks at Yasnaya, made six or seven pictures everybody liked. He presented one landscape to Sophia Andreievna, who particularly admired the part of the forest where the green stick is buried. Lev Nikolaievich showed him that space. Pokhitonov is a sweet kind soul. Lev Nikolaievich says that he is a true artist who, having a vision of the ideal, strives for ever greater excellence in his works.10”

The portion of the Pokhitonov archive which Zilberstein succeeded in finding in Paris included several then unknown letters of Ilya Repin. One of the missives, dated 5 December, 1896, contains this phrase addressed to Pokhitonov: “I’ve always admired your splendid creations, they will be forever etched in the annals of our art. I believe they clearly reflect your pure, kindly soul.11” 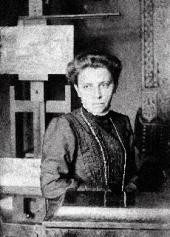 Leo Tolstoy in front of the Tree of the Poor in Yasnaya Polyana. 1905.
Oil on panel Private collection, Switzerland 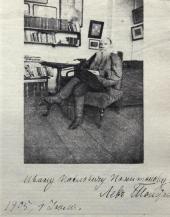 Leo Tostoy in the Forest near the Place where The Green Stick is Buried. 1905
Colour pencils, paper on panel. 16.5 x 21 cm. Otar Margania’s collection, Moscow