"I WILL BE THE FIRST ONE TO REJOICE IN OUR VERY OWN ART," TURGENEV WROTE TO THE ART CRITIC VLADIMIR STASOV, AND THE PHRASE BECAME THE TITLE FOR AN ARTICLE BY ILYA ZILBERSTEIN, A RENOWNED ART EXPERT, MAN OF LETTERS AND COLLECTOR*. HIS ARTICLE INTRODUCED READERS TO LITTLE- KNOWN PAGES FROM TURGENEV'S BIOGRAPHY, WHICH WERE ASSOCIATED WITH THE WRITER'S ROLE IN THE LIFE OF MANY RUSSIAN ARTISTS, INCLUDING IVAN POKHITONOV.

<...> At the time, there was another young artist, a beginner who drew the writer’s attention, and close attention, for that matter. It was Ivan Pavlovich Pokhitonov <...>.

Pokhitonov probably first met Turgenev at Alexei Bogolyubov’s residence, at his “Tuesdays”. A mature artist who due to ill health could not endure Russian winters, Bogolyubov had to settle in Paris in 1873. He was not only a mentor to young painters and sculptors who had finished the St. Petersburg Academy of Fine Arts with a gold medal (which entitled them to a government grant for a lengthy stay abroad to improve their art), but Bogolyubov also did many a favour to numerous other young Russian artists who for this or that reason found themselves in France.

The “Tuesdays” in his house in the Rue de Rome, in Valentina Serova’s words, were “the centre of the small Russian cultural circle in Paris”; artists and writers, actors and musicians, public and political figures all gathered there. Turgenev was a regular guest at those “Tuesdays”. Naturally, having settled in Paris in 1877, Pokhitonov visited Bogolyubov1 right away. Even though the grey-haired, distinguished master did not formally teach art after he moved abroad, the advice he gave was very important to Pokhitonov; thus, when presenting Bogolyubov with one of his paintings (“Pheasants”, 1880) two years later, Pokhitonov wrote: “To my much esteemed teacher A.P. Bogolyubov. I. Pokhitonov.”

In the first few weeks after Pokhitonov’s arrival in France, Turgenev and Bogolyubov engaged him in organiing the Society for Mutual Assistance and Charity of Russian Artists in Paris. Among those who signed Turgenev’s letter of thanks (18 June 1878) which was addressed to an individual who continuously financed the Society and provided space for its club and studio, Pokhitonov’s name was next to those of Turgenev, Bogolyubov and Antokolsky.

Turgenev’s note to Pokhitonov, which survived among the artist’s archives that we were able to locate, attests to the unaffected relationship that developed between the writer and the young artist. This unpublished note of 2 July 1879 notifies Pokhitonov of the unveiling of the tombstone that the sculptor Antokolsky had designed for the grave of the orientalist Nikolai Khanykov, a friend of Turgenev’s. The text reads:

“Dearest Pokhitonov,
You are invited to come to the gates of Pere Lachaise at three o’clock sharp this Friday, 4th July, to attend the blessing of the tombstone on N.V. Khanykov’s grave.
Most respectfully yours, Iv. Turgenev.
(Circular)
P.S. Would you be so kind as to forward this announcement to Mr. Villie and Mr. Roman, whose addresses I do not know, as well as those members of the Gintzburg family who would like to pay their respects to the deceased.”

The note refers to the artists M. Villie and R. Roman, as well as H. Gintzburg, all good acquaintances of the writer.

Pokhitonov’s name is often mentioned - and always in positive terms - in Turgenev’s surviving correspondence with his friends from 1881-1882. As to the writer’s remarks on Pokhitonov’s landscapes and portraits, they were always more than enthusiastic.

Thus, in his reply to Yakov Polonsky’s request to get his in touch with the artist, on 23 September/ 5 October 1881, Turgenev wrote: “Went to see Pokhitonov, but did not find him at home: he has disappeared somewhere in the country and left no forwarding address. Rumour has it he is working a lot.” We may conclude from this note that Turgenev had been to the artist’s studio many times before. Two months after that, in his letter of 24 November/6 December, Turgenev asks Josephine Polonskaya: “Please tell Yakov Petrovich that Pokhitonov, whom he is interested in, has not returned from Russia yet.”

On 8/20 February 1882, the Society for Mutual Assistance and Charity of Russian Artists in Paris organised an exhibition of works by Russian artists in Paris. Naturally, Turgenev took an active part in preparations for the exhibition, and knew very well which paintings were to be shown. However, it turned out that only Pokhitonov’s landscapes were to the writer’s liking. So in the same way that he did when Vereshchagin exhibited his work in Paris, Turgenev started drawing the attention of his French friends, writers and journalists, to Pokhitonov’s art. Here is a testament to that - a note (written in French) that he sent to Emile Durand, a fellow man of letters and translator:

“Dear Monsieur Durand,
I cannot remember exactly when I was to come visit you, today or tomorrow; I will come tomorrow at three in the afternoon, if it suits you. To use the occasion, I am enclosing an admission ticket to our exhibition; I recommend above all the small but downright remarkable paintings of Pokhitonov.
A thousand compliments, and till tomorrow, Iv. Turgenev.”

Another fact serves as indirect evidence of the writer’s efforts to make sure that the Paris press took notice of the young artist’s landscapes that were shown at the exhibition. Turgenev was a good friend of Juliette Adam, a French writer who also published the magazine “Nouvelle revue francaise”. On 15 March, the magazine published an article about the exhibition expressing “regret that there were no paintings by Vereshchagin” as well as enthusiastic praise for “the lovely palette and craftsmanship of Pokhitonov’s landscapes”.

We can safely assume that other favourable reviews of the young artist’s paintings were published in some measure due to Turgenev’s labours.

Turgenev touched upon the exhibition in his letter of 13/25 February 1882 to his close friend Pavel Annenkov - again, of all the artists who took part in the exhibition, he praises only Pokhitonov: “We organised an exhibition of paintings by Russian artists. It is not well attended... which is easy to understand. With the exception of Pokhitonov’s tiny landscapes - mediocritas! [Latin mediocrity].”

In the second half of the same year, Turgenev and Polonsky disputed on landscape art, as the former admired the Barbizon group of artists, while the latter extolled a second-rate Swiss artist Calame. In response to Polonsky’s mention of Pokhitonov in a letter that has not survived, Turgenev answers the poet: “I will not go again into talking about the landscapes, etc. Let me just tell you that Pokhitonov’s focus is not on the details at all; even though his brushstrokes are so refined, his brush is broad and bold in colour, like Rousseau’s.” Among Pokhitonov’s papers, there is a letter of invitation, signed by Bogolyubov and Turgenev, to the New Year celebration that the Society for Mutual Assistance and Charity of Russian Artists in Paris held on 12 January 1883. There is a print of a Christmas tree on the invitation, with the words “Happy New Year and Much Happiness” on the top. The date, in Turgenev’s hand, is 4 January 1883. The writer attended the celebration. Already gravely ill, he still read a few of his “Poems in Prose”. It was the last time he came to a gathering of Russian artists, and the last New Year celebration of his life.
There are two interesting entries related to Pokhitonov in Turgenev’s diary that I was able to locate - the diary he kept during the last months of his life. As he lists his visitors of the past few days, on 5/17 December 1882 he writes in his journal: “Pokhitonov painted a lovely little picture (snow, a herd of cows); he brought his wife with him to meet me - a sharp, pretty little medical student.” In the entry dated 31 December 1882/12 January 1883, as he summed up his impressions of those who had visited him in the past three weeks, Turgenev wrote: “Liphart painted my portrait (ink on paper) for Glazunov’s publication. Pokhitonov is also painting one, and it is coming out quite well, and looks just like me! What a master he is! He brought the pictures he had painted through last summer to show to me and [Pauline] Viardot - they are lovely!”

During the same last months of his life, the writer was busy organising a large Paris exhibition of Russian artists, members of the “Peredvizhniki” (Wanderers, or the Society of Travelling Art Exhibitions) movement; it was intended that the renowned Russian artists who at the time were living in France would also show their work at the exhibition. It was regarding those arrangements, as “the Secretary of the Society of Russian artists in Paris”, that on 6/18 December 1882 Turgenev wrote a lengthy letter to Ivan Kramskoi. This letter could be considered a declaration of sorts, so clearly does the writer state his view on the development of Russian art. <...>

In this letter, Turgenev names Pokhitonov as one of the “principal members” of the exhibition he was planning. There is no doubt that, according to Turgenev, this splendid artist was among those masters of Russian fine art who enjoyed “portentous success” in France.

As for the large exhibition of Russian art that Turgenev was hoping to show in Paris in the autumn of 1883, it did not become reality - his fatal disease left Turgenev bed-ridden for the last six months of his life, and on 22 August/3 September 1883 he died. 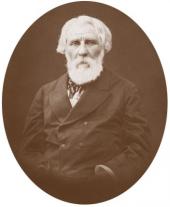 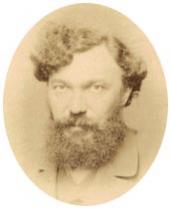 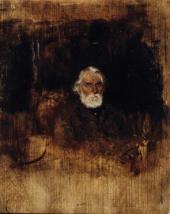 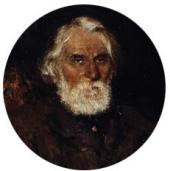 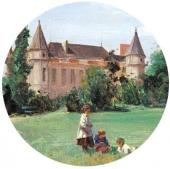 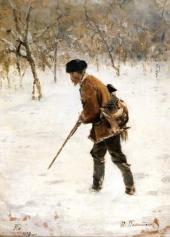