IVAN POKHITONOV'S LIFE AND ARTISTIC ACTIVITY ALONGSIDE THE EXTENSIVE DATA ON THE LIFE OF HIS DESCENDANTS REVEAL DEEP SPIRITUAL AND STRONG FAMILY TIES. HAVING EXPERIENCED MANY MISFORTUNES, HE WAS HAPPY TO HAVE MET MANY OUTSTANDING PEOPLE OF HIS TIME. THE LIVES OF HIS DESCENDANTS BECAME INTRICATELY INTERTWINED WITH THE LIVES OF THE DESCENDANTS OF THEIR GRAND- AND GREATGRANDFATHER.

In 2000, Pokhitonov’s grandson Edgar Soulié in Paris received us together with Alexander Alexandrovich Lyapin, a grandson of the artist Vasily Polenov1, and the art scholar Tatiana Mojenok Ninin. Monsieur Soulié was very obliging, showing to us his grandfather’s works in his possession and slides of the artist’s other pieces.

Several years later, when we were preparing the anniversary exhibition, we asked Alexander Lyapin to put us in touch with Monsieur Soulié and Pokhitonov’s other descendants.

Once, during one of his conversations with Edgar Soulié , Lyapin learnt, to his surprise, that Edgar’s grandmother - Pokhitonov’s elder daughter, Vera (called Barbara Bienaime at the time) - organised and oversaw a boarding house for the Russian emigres’ children called “The Russian Fireplace” [Le Foyer russe] in Verrieres- le-Buisson, where Lyapin lived from 1939 to 1942. In the boarding house the children received a European education but were also taught to love and keep loyalty to and respect for Russia. In the daytime the children studied in a regular municipal school in Verrieres-le-Buisson and in the evening they came back to the boarding house. Lyapin remembered those years all his life with sincere gratitude.

The life of Vera Ivanovna Pokhitonova (1883-1967) was also filled with dramatic changes. Heeding her mother’s wishes and behest, she gained a medical education but, possessing an obvious artistic talent, was eager to take up painting. Studying at medical school, she met Edgar Soulié (1879-1926), her first husband and grandfather of the Edgar Soulié we know; her second husband was Robert Henri Bienaime (1876-1960), a president of a prominent fragrance house Parfum de Bienaime. In 1929 Madame Bienaime bought an estate with a two-storey house, outbuildings and a garden in Verrieres to organise a boarding house called “The Russian Fireplace”. When Monsieur Soulié came to Russia to visit the Pokhitonov show, he passed me a publication devoted to the history of this establishment2.

Special words of gratitude were addressed to Vera Ivanovna Pokhitonova by the Russian emigre, the writer Nikolai Brechko-Brechkovsky3. His article starts with this passage about Pokhitonov and his daughter: “Basking in international fame, he was surprisingly modest. He seemed to feel embarrassed at his colossal celebrity. He was kind and responsive. And he always helped impoverished artists burdened with families. He was touchingly sweet towards children <....> Ivan Pavlovich’s daughter Madame Bienaime followed her father and without much pomp and fanfare, works for the great cause of extensive and useful philanthropy.4”

This article published in the 1929 (No. 13) issue of ''Le Thèâtre et la Vie'' magazine was sent to us by Emile Witmeur’s nephew Pierre Francois Witmeur with the assistance of Allegra Markevitch-Chapuis. The text is reproduced from the magazine publication in the Russian and English translation.

For many years, I was very well acquainted with the art world of Moscow and St. Petersburg. I also knew the families of the artists who had passed away, and had a chance to witness personally the tender and touching efforts of these families to keep alive the memories of their loved ones, those incomparable artists who had left the glorious realm of art behind and now forever.

However, I would have to admit that I did not know that one could cherish the memory of one’s father as lovingly, with such consideration, as Madame Bienaime, the daughter of the late Ivan Pokhitonov, a famous Russian artist and a member of the Academy of Arts. It is true worship. Worship that is both noble and grand, worthy of the deepest respect. In one of the halls of her mansion in Neuilly, the artist’s daughter has gathered as many as 50 of her father’s paintings5. One has to admit that there is nowhere else in the world that the work of an artist who is no longer with us is represented in one place as fully as it is in that quiet, dignified house in Neuilly. A beautiful necklace to grace a Queen’s neck has to be pieced together gradually, one beautiful pearl at a time. This is exactly how Madame Bienaime assembled her splendid collection - one painting at a time, to match.

You enter this hall as if it were a house of worship. And like in a house of worship, you lower your voice; visitors slow their pace and walk in silence. I have always admired Pokhitonov’s art, but it was only here, at his daughter’s home, that I had my chance to really appreciate his magnificent and manifold talent. The spacious hall, with its soft silvery overhead light, showcases every detail of Pokhitonov’s superb and prolific art, touched by genius at each of its stages, from the beginnings to the prime, mature works. His paintings en plein air are presented here - realistic, executed with unparalleled craftsmanship and incredible skill. They are filled with quiet poetry; the viewer feels like they are looking through the veil of an enchanted dream. Here is a small portrait of a woman... It could be one of those miniature masterpieces, so favoured by Rembrandt - the effect of light and shade is extraordinary, and the tiniest details remain within the graceful and elegant colour palette.

As Russians, we are always proud to see every example of our national art gaining recognition abroad; so we can only bow our heads in respect of Madame Bienaime’s wonderful plan to organise an exhibition of her father’s masterpieces next year. This exhibition will certainly become a source of great impressions for the Russian youth, who have come of age in exile, and are not familiar with Pokhitonov’s art. There is no doubt that the exhibition will be a major event in the next winter season in Paris. We all wish it great success. The Russian community is looking forward to this outstanding event in the world of art. As for outsiders, they will have yet another chance to appreciate the plentiful and diverse Russian art. 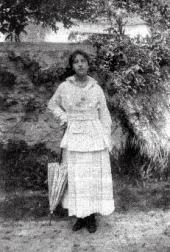 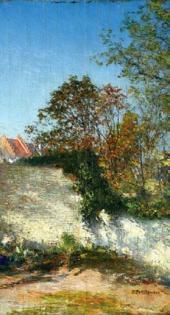 The building of “The Russian Fireplace” in Verrières-le-Buisson.
Photo. 1940s 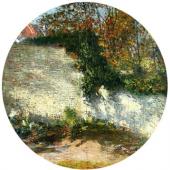