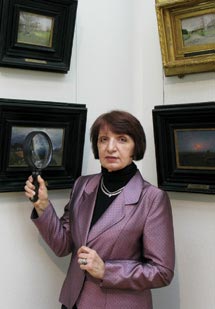 You have in your hands a special issue of the “Tretyakov Gallery” magazine that is dedicated to the life and work of the distinguished Russian artist Ivan Pavlovich Pokhitonov (Pokitonow) (1850-1923). For most of his life he lived in France and Belgium, but he never lost touch with Russia or Russian art as he considered himself a “Russian artist”. The poetic expressiveness of his work, so inherent in Russian “mood landscapes”, seamlessly came together with the refined French painting style, combined with the artist’s highest standard of excellence that he applied to his paintings.

Pokhitonov’s paintings, executed with such marvellous skill, so full of love for nature and harmony, drew singular attention from the public. The exhibition was extended twice at the viewers’ request. Many a viewer could be seen with a magnifying glass to be able to see the details. They left numerous sincere and fervent remarks in the guestbook and wrote of their admiration of the artist’s virtuoso technique that “cast a spell” over them, and seemed like a “miracle”.

In the process of preparing the catalogue for the exhibition, we were able to contact Alexander Alexandrovich Lyapin (11 June 192713 March 2011), Vasily Polenov’s grandson, who lived outside Paris and dedicated all his life to the preservation of Russian culture in France; we contacted the artist’s descendants, Allegra Markevitch-Chapuis and her sister Natalya Markevitch-Frieden, who live in Switzerland. They provided us with documentary photographs, some of which were included in the catalogue, as well as certain facts regarding the artist that allowed us to clarify the facts of his biography.

We would like to point out that Allegra Markevitch-Chapuis has taken all of our challenges to heart and has been our guardian angel throughout our preparing the exhibition, its catalogue, the reception dedicated to the artist’s memory, and eventually this issue.

Many of Pokhitonov’s descendants came to the exhibition from various countries, among them Edgar Soulie of Paris, Pokhitonov’s greatgrandchildren and the artist’s great-grandniece Alexandra Eilenstein von Wulffert of Munich. They shared with us their family legends, recollections and surviving letters. We can safely say that it was the anniversary exhibition of Pokhitonov’s art that brought all the family members of the artist’s descendants together in their desire to collect as much information as possible about their famous ancestor.

All of these materials revealed such an intricate confluence of the lives of Pokhitonov, his artist friends and their descendants, that we called the reception dedicated to the 160th anniversary of the artist’s birth “A Link of Times and Entwined Destinies”. It took place on 1 October 2010 at the Tretyakov Gallery. The artist’s favourite music was played, just as it had been played in his home; events of his and his descendants’ lives were remembered and brought back to life.

It was then that the idea was conceived to prepare a special issue of the “Tretyakov Gallery” magazine to preserve, for all the admirers and scholars of Pokhitonov’s art, all of the information about the artist and his amazing life that we had been able to obtain. The project was sponsored by Otar Margania, who supported the publication of this special issue of the magazine, just as he had done before when we were organising the exhibition at the Tretyakov Gallery and publishing its catalogue, for which we extend our sincere gratitude.