The Origins of Thangka Painting

The following section, in its entirety, is an extract from Orgyen Tobgyal Rinpoche's teaching given at Lerab Ling in autumn 2014.

The Buddha sent this representation, along with many words extracted from the sutras, to the King of Sri Lanka. Since the thangka was very large, the King hung it up in his palace where it could be seen by many people. Among the people present there to see the thangka were many who had travelled from the central land of Magadha. As soon as they saw the image they instantly prostrated themselves and said, "To the master, Buddha Shakyamuni, I pay homage!" Through this the King of Sri Lanka realized that the Buddha was, indeed, extraordinary. Such is the history of the origin of the first thangka and the origin of the tradition of representation of the Buddha as a visual art form.

Four Major Symbols Used in a Thangka to Represent the Buddha

When it comes to representing the Sugatas, however, the Buddha himself said that it was not possible to represent all the features, marks and signs of a fully enlightened being. But in order for us to remember the Buddha, at least four signs need be represented. For example, in order to represent the extraordinary birth of the Buddha - who was born from the side of his mother and at birth took seven steps in all four directions - the artists depict the great Sala tree under which Queen Maya stood while giving birth, with seven lotuses arranged in the four directions. Or, in another example: in order to represent (and thus recall) beings of enlightenment, the Buddha is drawn on a throne by the Bodhi tree emanating rays of light of all colours. In order to represent and recall beings of the Buddha's turning of the wheel of the dharma, the Buddha is depicted by the Bodhi tree giving teachings. In order for people to remember the passing of the Buddha into parinirvana, the Buddha is drawn lying down on a long bed-like throne between two Sala trees - one at his head and one at his feet - with many monks in mourning gathered around. These are the four famous symbols of representation, or the signs for remembering the Sugata. Even in the tradition of the Vinnaya, in order to remember the Tathagatha, the four major symbols of representation are described in the teachings. In the secret mantra vajrayana, the main support for the practice is the thangka, which is a samaya substance. 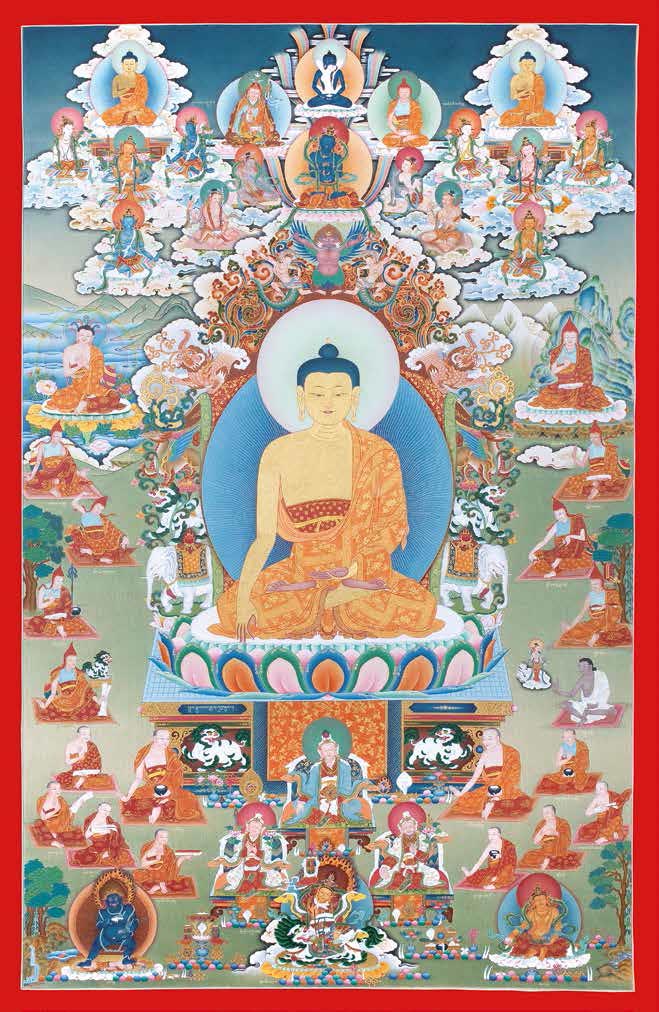 The tradition of thangka painting came to Tibet from India and was largely influenced by the art form developed in Nepal. The subject of iconometry came along the same route to Tibet; iconometry is a system of specific measurements and proportions used to represent the Buddha on cloth. There are different proportions used to depict the Buddhas, Bodhisattvas, and peaceful and wrathful deities. A thangka painter must study this system and abide by it correctly when making a representation of the Buddha. This iconometry science is extremely sacred. For example, if you start drawing purely out of personal inspiration you will not be able to consecrate the image so that the actual wisdom deity can remain in the image. In Tibet, four great traditions [of thangka painting] evolved based on a single transmission of iconometric proportions. 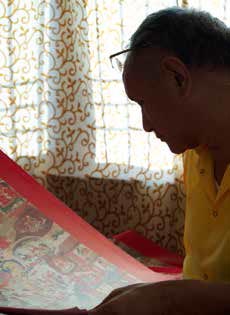 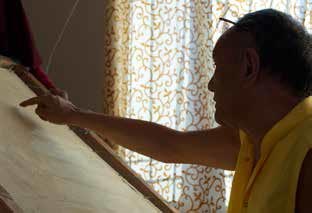 The process of painting a single thangka is very involved, and each thangka takes a long time to complete. First there is the stage of thorough preparation of the canvas. This is followed by the application of foundation line drawings, which are preceded by purification rituals and prayers that the artist needs to perform. Then the artist needs to mix all the paints required (if natural materials, such as minerals, are used). Finally, the painting process can begin, which proceeds in several stages. Each thangka can take anywhere from three months to a year to complete depending on its size and complexity.

For the 108 Masters of the Dzogchen Lineage Thangkas Project, a master thangka painter, Kalsang Dorjee, will head a team of around 15 apprentices with various levels of experience, drawn from the different Himalayan regions of Tibet, India , Bhutan and Nepal. Kalsang Dorjee himself comes from the Kham region of Eastern Tibet, where he learnt the craft of thangka painting and practiced it for over 15 years before coming to India, where he met Orgyen Tobgyal Rinpoche in 2004. Since then he has painted many thangka series commissioned by Rinpoche, the latest being this project, the 108 Masters of the Dzogchen Lineage. 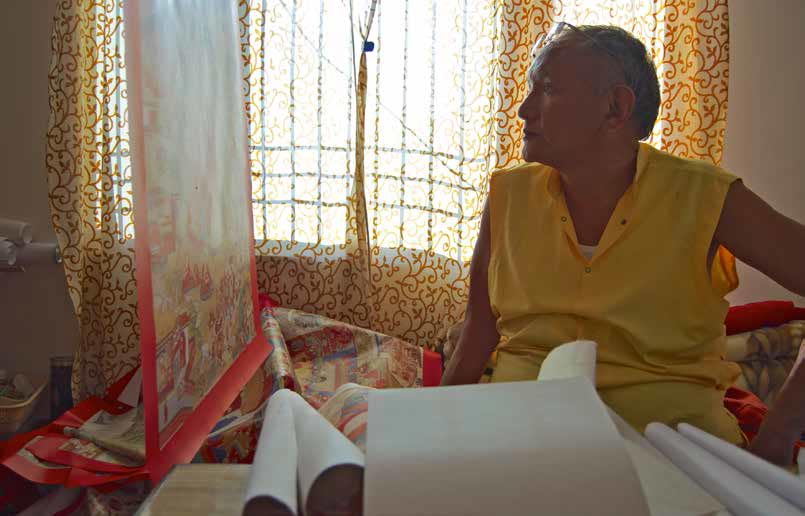