Description of the Dzogchen Thangka

In the centre presides the Primordial Buddha and "owner" of the Dzogchen teachings Samantabhadra, in union with Samantab- hadri. The colour of the sky, Samantabhadra appears seated in the lotus posture, his hands in the samadhi mudra.

To their right and left, appear a blue Samantabhadra and white Samantabhadri according to the vision of the Guhyagarbha Tantra (Gyu Sangwa Nyingpo), which places them in the East and West respectively.

Above the central figure are "the three peaks of the Dzogchen teachings": the vajra, the volume of the Dra Thal Gyur "Reverberation of Sound" (the most important and root tantra of the Menn- gagde Pith Instruction category of Dzogpachenpo) and the stupa, surrounded by the six syllables:

In his Semnyi Ngalso and Seven Treasuries, especially the Treasury of the Supreme Vehicle, the omniscient Longchenpa wrote about the three peaks, which hover above wherever the Dzogchen teachings are taught: originally in Bodhgaya, then in Tibet and now also in the West at places like Lerab Ling. When the Dzogchen teachings spread very widely in the world, the three peaks are said to emanate rays of rainbow light, smoke and fire.

Above, on Samantabhadra's left is Guru Chowang's Lama Sangdu in union with the red Yeshe Tsogyal; on his right appears Amitay- us according to Ratna Lingpa's longevity practice Tsedrup Sangwa Dupa, which is included here for the long life of Sogyal Rinpoche.

Of the three kayas, the dharmakaya is represented by Samantabhadra and consort, the sambhogakaya by Lama Sangdu and the nirmanakaya by Amitayus.

Below, on Samantabhadra's right is the blue Vajradhara and on his left the red Vajradharma, who compiled the 6,400,000 verses of the Dzogchen tantras taught by Samantabhadra.

In the centre below stands Chemchok Heruka, pre-eminent among the yidam deities.
This thangka was painted under the direction of Orgyen Tobgyal Rinpoche, who offered it to Sogyal Rinpoche and also kindly provided this description.

Taken from a teaching given by Orgyen Tobgyal Rinpoche in Lerab Ling, France in 2013. 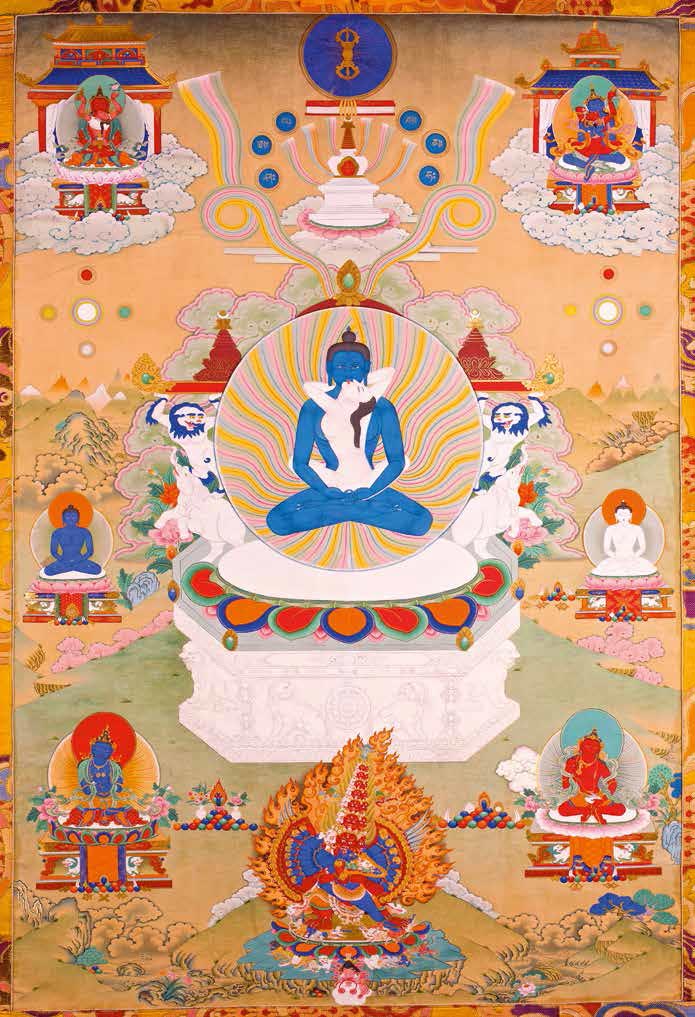