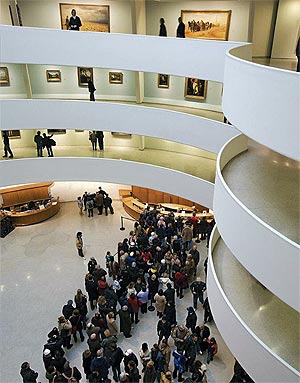 EVEN BEFORE ITS MID-SEPTEMBER OPENING, "RUSSIA!" GARNERED A GREAT DEAL OF POSITIVE ADVANCE PRESS IN THE UNITED STATES. IN ITS SEPTEMBER ISSUE, THE FASHION MAGAZINE "ELLE" INCLUDED THIS "STUPENDOUS EXHIBITION" AS #24 IN ITS EXCLUSIVE ANNUAL "TOP 25" LIST.1 "VOGUE" PROCLAIMED THAT THE SHOW WOULD MAKE CLEAR THAT BETWEEN ICONS AND ABSTRACTION, RUSSIAN ART WAS FAR FROM A "SIBERIAN WASTELAND."2 TO BE SURE, SUCH ARTICLES WERE RELATED TO THE PREDOMINANCE OF RUSSIAN-INSPIRED STYLES IN THE FASHION INDUSTRY'S FALL LINES, BUT THEY SPREAD WORD OF THE SHOW TO THESE PUBLICATIONS' SUBSTANTIAL READERSHIPS.

Just before the exhibition opened, the highly regarded fall arts preview in the Sunday edition of the "New York Times" had a feature on "RUSSIA!" Author Kathryn Shattuck recounted the story of the how the show was organized.3 While she described the challenges of the Russian-American curatorial team trying to reach consensus on the checklist in largely Cold War "Us vs. Them" terms, Shattuck did give an accurate sense of the magnitude and significance of the show, the most chronologically comprehensive survey of Russian art ever sent to the West. The vivid color illustrations of Ilya Repin's "Bargehaulers on the Volga" and Oleg Kulik's "Cosmonaut" peaked the interest of a public almost entirely unfamiliar with such works and created a buzz of anticipation in the museum world.

Just days after this article appeared, President Putin inaugurated the exhibition - an event widely covered by television and print media - and virtually every major publication began to weigh in on "RUSSIA!" David Minthorn's review for the Associated Press, picked up by innumerable regional papers, called attention to the fact that Russian art had "been largely out of the reach of the Westerners," but that the Guggenheim's close ties with Russian institutions had made possible the presentation of diverse masterworks.4 Roberta Smith, art critic for the "New York Times" acknowledged that the show had shortcomings, but rather than enumerating them, she hailed the "humbling breadth of [the exhibition's] vision and profundity."5 Smith noted that the show addressed the history of both painting and Russia, a combination of themes which provided a "mind-expanding crash course in the art and history of a distant country."6 Reviews in the Times are widely read by the American public as indicators of what to see, and so Smith's unadulterated enthusiasm for "RUSSIA!" undoubtedly played a role in the huge first-weekend crowds.

Within days of this review, the magazine "The Economist" told its readers not to miss the show, which contained "surprise, shock or delight in almost every one of the 250 pieces."7 "RUSSIA!" made the weekly magazine "Newsweek"'s top picks for the week of 26 September, and the "Wall Street Journal pronounced it a lucid show "that not only offers much to see, but much to think about."8 "The Christian Science Monitor" remarked that "Russia, seen through its art, is like those nested dolls hawked to tourists - seemingly a monolithic chunk but composed of manifold layers from past to present."9 By the end of October, various publications marveled at the fact that "RUSSIA!" had seen as many as 26,000 visitors per week.

Of course not all of the American press embraced the exhibition. In "New York Magazine", Marc Stevens wrote that he found the show "baggy" due to its lack of "interesting intellectual contours."10 He attributed this problem to the large number of curators on the team, which, he asserted, resulted in an exhibition that reflected "committee group-think" and had a "stuffy official smell." He took issue with the sponsors of the show, as well as President Putin's patronage, arguing that the confluence of money and power represented by "RUSSIA!" had a "yuck factor."11 Russian emigre art historian Margarita Tupitsyn made a similar argument in the powerful art journal "Artforum".12 She accused the Guggenheim of propagating a revisionist version of art history determined by Russia's political and financial powers-that-be. For example, she attributed the underem-phasis on the historic avant-garde to "the pressure that Russian collectors have brought to bear."13 Both Stevens and Tupitsyn's analyses show that in the United States "RUSSIA!" has been seen to have sociopolitical as well as art historical import.

While the press accounts mentioned here have certainly increased the show's visibility, and hence the public's awareness of it, I would argue that the incredible number of visitors -which have broken nearly every attendance record for the Guggenheim - also reflects word-of-mouth recommendations and a positive experience that has led many people to come to the show more than once. American visitors seem to revel in becoming acquainted with so many previously unknown and impressive masterworks of art. They are surprised to learn that Russian artists were not always isolated from world trends, and therefore much of the art on display is accessible to them despite its unfamiliarity. We have also had an incredible response from Russians living in the United States. One need only walk around the galleries to note how much Russian is being spoken. I have been tremendously moved by the number of Russian families that visit with multiple generations - grandparents, parents, young children. The level of pride and nostalgia displayed has been truly remarkable to behold.

The high volume of visitors listening to the audio guide and spending time reading the wall panels, coupled with the impressive rate of sales of the catalogue, testify to the fact that this exhibition is helping the Guggenheim's international audience to appreciate and understand the history of Russian art. Attendance at the related programming, which has ranged from panels with Russian and American artists, to lectures by James Billington and Albert Kostenevich, to a poetry reading by Yevgeny Yevtushenko, have drawn large and responsive audiences.

By the time "RUSSIA!" closes in mid-January, more than 350,000 will have seen what has truly proven itself to be a blockbuster exhibition. The response of critics and public alike has astounded and thrilled all involved in this historic project and has energized us as we work towards taking this show to the Guggenheim Museum Bilbao in 2006. 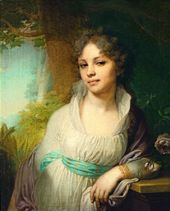