Jannis Kounellis: Meta-reality of S.T. as a Genetic Art Code

Twenty years after his previous visit Jannis Kounellis came to Moscow again this year. In 1991, his art affirmed the absolute value of the material, the matter, and those of its forms, which determine man’s life, its texture and its matrix.

In the 2011 project, designated as “S.T” — probably Senza Titolo (Without Name) the unique artistic and life experiences of Jannis Kounellis are fully revealed, including his personal coordinates, as well as those of many human fates, and the figurative image of our civilization. The artist encodes various abbreviations related to his artistic message while at the same time concealing the actual name of his project and, moreover, this gesture continues, and perhaps even concentrates, his strategy of indicating an extended context of his work. “S.T.” lays bare the installation in all its asceticism, strictly within the tradition of “arte povera”, and at the same time “S.T.” outstrips any borders and enters the land of conceptualism and the universal artistic spaces and senses. The abbreviation “S.T.” condenses as it were the genetic code of art which is contained in the word “artiST”, in the technique of “inSTallation”, in the magic object of “inSTrument”, in the score of the Latin alphabet where ST appears in the wholeness of its dialogue as part of the specific series of letters and signs: after R and before U, sliding as a pebble thrown into an Adriatic lagoon. ST focuses on the Latin alphabet, bringing it together as if in a flash or a wave thrust, without rejecting corpuscular, atomized phenomena moving as individual units through the pause of a full stop: S.T. Jannis Kounellis immediately captures our gaze with a heap of scattered clothes on which he places some ruined music instruments. He mesmerizes the viewer’s vision convincing him in his ability to peer endlessly into the layers of space where the lost and traumatized human fates are returned to its sources, represented by the pram rolling along the rails within the topography and the drama of the installation. The pram brings to mind Russian literature, and specifically Gogol, Turgenev, and Dostoyevsky with their ironic and simultaneously elevated “folds” of texts and the ideal literary experiences shared by Russian people. This pram is a painful recollection of Sergei Eisenstein’s “attractions montage”, as in his legendary film “The Battleship Potemkin” where a pram with a baby inside jumps down the Odessa staircase and is reflected in the mother’s mad eyes wide with horror. As it jumps down the steps its feverish movement interferes with the measured rhythm of marching armed soldiers. The nostalgic binocular optics of this touching and defenseless image is geared towards the flickering toy locomotive, which has also appeared in one of Jannis Kounellis’s earlier installations.

In what direction the artist’s pram is likely to move as it carries the metaphor of a locomotive and returns us to the mysterious abbreviation “S.T”? It may represent a dialogue of “weST — eaST” extending its visual meanings to suggest the Trans-Siberian Railway, a journey which the entire European avant-garde had dreamed to take, beginning with Alfred Jarry and ending with Joseph Beuys. Along the TransSiberian Railway prisoners were transported to Stalinist labor camps. Anton Chekhov, the first representative of the culture of the absurd in the history of art, went along the Trans-Siberian Railway on his way to the Far East and concluded this trip with his famous notes about the prisons of the Island of Sakhalin.

The “S.T” installation, seemingly existing within superfluous limits, in neo-baroque reality, in actual fact manifests selflessness and poverty, its vector is turned towards absolute archaism where all values are located at the lower level: in the pre-Renaissance perspective of human existence, at the “horizon of events”, to quote an expression used by astrophysicists as they watch the “black holes” of the outer space. In Kounellis’s art the figurativeness of the fallen clothes that have lost the human body harks back to Masaccio and his fresco “Eviction from Paradise” which shows the passage of Adam and Eve from their angelic world into the reality of earthly peregrinations producing the clothes of mortality, futile desires, and the first losses. To shed one’s clothes means to
return to the organic world of nature and primeval senses. This requires much courage, solitary willpower, and the dignity displayed by St Sebastian who retained his immortality with a simple sacral gesture and the greatness of spirit encoded in the two letters: ST which remind us how a Roman legionary Sebastian turned into St Sebastian.

So what do we see in this installation: remains of a massacre with fallen heroes, a battlefield, or a metaphysical space of great eternal rest replete with meaning, bringing to mind the biblical phrase: “You have to die before you are born”?

Silence, suppressed sound, broken music instruments — what are they saying to us? Perhaps this silence is a reminder of the pure sound of the universe itself, of the iconography of Rafael’s “St Cecilia” in which the saintly woman hears the voices of angels and throws away her music instruments because she no longer needs them.

One should observe and listen to the simple reality around us, penetrate the heavenly nature of its existence — and this is the artist’s message as he turns the next page in the endless history of art suggesting that we return to its sources where the new future is being formed. 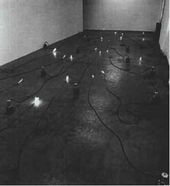 Untitled, 1982
Flames on the wall with a black stripe on paper (a detail). Berlin, National Gallery (photograph: Peter Hebler) 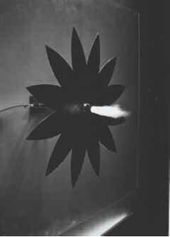