Last December Venice paid homage to Zoran Mušič (1909-2005) with an exhibition, “Estreme figure”, commemorating the centenary of his birth. Hosted by the Istituto Veneto di Scienze, Lettere ed Arti, it saluted an artist of international standing, viewed as one of the key figures of the 20th century, who hailed from Dalmatia and became Venetian by adoption. With an oeuvre spanning almost the whole of the last century, his austere, minimal style is indicative of a process of paring things down to their essence. The city on the lagoon proved a source of inspiration and constant point of reference for the artist throughout his career, as a place of fusion between East and West.

A Mitteleuropean wayfarer, who — in the words of the curator Giovanna Dal Bon — remained forever “heimatlos”, or “without a home”, Zoran Mušič was born in Gorizia, then part of the Austro-Hungarian Empire, a crossroads of races, cultures and languages. He spent his childhood in Dalmatia, then as a refugee in Styria and Carinthia. This was followed by art school in Zagreb, a stay in Prague where he gathered impressions of Klimt and Schiele and the French Impressionists, a long period in Spain discovering Goya, then exhibitions in post-imperial Trieste, where he met his future wife, the painter Ida Cadorin. Then came the move to Venice. After his horrific deportation to Dachau he returned to Venice in 1946, where he lived, alternating with periods in Paris from 1951 onwards, up to his death in May 2005.

The slow and dignified gait, the measured tread. The athletic height. The massive facial features. The elegance and skill to wear bespoke suits.

The gentle civility of a person who does not like to talk a lot and prefers to listen silently. Everything in Zoran Mušič (his gait, his gestures, his voice) speaks of a capacity to wait, to observe and to think things over without hurry.

He is a wanderer in a bygone Central Europe who passes beyond every boundary. He has walked across the 20th century, coming in touch with cultures, nations, languages, destinies.

The coaly flavour of Central Europe that haunts like a black steaming shadow the figure of the wanderer featured in many of his paintings from the mid-1990s.

Zoran knows firsthand about passing over boundaries: Styria and Carinthia in his childhood, then Dalmatia, the Karst, Trieste, post-imperial Vienna, the stay in Prague, the horror of incarceration in Dachau. When he came to Venice, he said he found a place with a harmonious combination of the East and the West. In Venice he discovered for himself the gold of Piazza San Marco; evidence of this is his series of paintings “Cathedrals”, created in the 1980s, which featured mysterious-looking caves and were saturated with Byzantine splendour.

Zoran Mušič was born in 1909 in Gorizia, which was then a part of the Austro-Hungarian Empire, and an epitome of the idea of migration — this feeling was ingrained in him. His favourite subject is the unhurried migration of a bear from Styria southward, to the border. His favourite writer is Ismail Kadare, the celebrator of the desiccated plateaus of Albania.

He always painted himself.

He treats his appearance as a bare landscape, without giving even a passing thought to any other subject, for his appearance is the only thing that he knows well enough.

The colours, which are few, recall a desert.

Here is what the artist himself has to say about this: “... I started using them [colours] when I finally decided that I had found myself: through them I wanted to show that which was hidden under my skin. I wanted to provide them with strength and to lend them an interior, profound tension.”

Mušič’s self-portraits correspond with his manner of self-expression so well that he can barely recall when he started committing his image to the canvas. The permanence that promotes changes in the process of becoming and stalks them.

“... Portraying the self was neither a test nor a risky essay. I tried to bring out all that was hidden inside me, although sometimes it caused me pain, ... I paint only selfportraits; I do not make portraits of other people, because I do not know them.” There is only one other person, apart from him, featured in his portraits — Ida. The stylized oval of her face, two-dimensional and iconic, first made its appearance in 1947, and ever since then became a constant presence in Mušič’s pictures. The artist’s firmament is spangled with myriads of Idas. They are inscrutable like a mystery. The flying hair, the silhouettes drawn by light, transpiring against a black background. Warnings in the darkness. Mysteries untouched. Ida is close to him; he runs into her every time he sets about talking about anyone besides himself. Ida is solidly connected to the golden essence of the Byzantine and tessellated Venice.

His first self-portraits represent a whole figure, whereas in later ones the image falls apart revealing a totally different level of resemblance.

Thus the long streak of old age will pass by, accompanied with bodily infirmity and an inevitable reconciliation with the force of gravity: the effacement of personal traits. Like someone enthralled by a fracture in the soil of a desert, the artist watches the gradual disintegration of the body and makes us aware that all that awaits us beyond is “profundity” where nothing is important any longer, and the only thing that is left is the human being fighting off the darkness ready to swallow him. Here, on this last ridge, the poetics of the visible prevails — this is the artist’s own element.

The last canto is the tribute of sustainability to such a poet-in-art as Mušič. 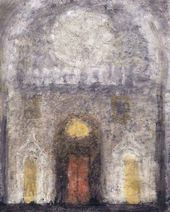 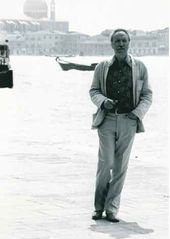 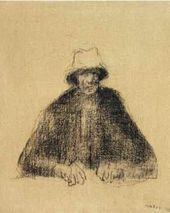 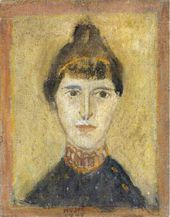 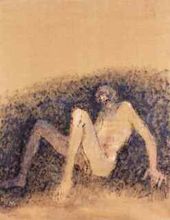 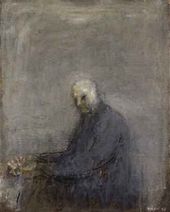