When the thaw of spring in the year 1030 finally broke the grip of the Russian winter, a band of warriors left Novgorod and went west. They were led by Olav Haraldsson, a king without a country since he had fled his Norwegian kingdom two years earlier. The Norwegian noblemen had allied themselves with Canute the Great, king of Denmark and England, who wanted to add a third crown to his head, and they had succeeded in chasing Olav out of the country.

He sought refuge with his wife's sister, the Swedish princess Ingegjerd who was married to Prince Yaroslav the Great of Russia, and Olav was warmly welcomed at their court. Yaroslav offered Olav a kingdom east of the Volga, but he could not forget Norway. He left his son and heir Magnus in the care of Yaroslav, and set off with his faithful men on the quest of regaining his kingdom. Crossing through Sweden he entered Norway east of Trondheim, but he was met by a large enemy army at the village of Stiklestad. On July 29 1030, Olav fell in battle at Stiklestad with most of his men. His body was saved by local farmers and buried in secret outside Trondheim. His brother Harald escaped back to Russia with the news and made his way to Constantinople, where he became an officer in the Imperial Guard. Canute the Great had triumphed.

However, one year later the situation had changed dramatically. Olav had been declared a saint and many miracles took place at his grave. Danish rule was unpopular, and in 1035 a delegation of Norwegian noblemen went to Novgorod to bring the ten-year-old Magnus back to Norway and put him on his father's throne. His uncle Harald later married Elizabeth, one of Yaroslav's daughters, who became queen of Norway in 1045. During the 11th and 12th centuries several generations of the royal families of Norway, Denmark, Sweden and Russia intermarried, with their female members moving from one country to another, sometimes marrying one king after another. The best example is Princess Malmfrid, daughter of Prince Mstislav, who first married King Sigurd the Crusader in about 1120, and after his death ten years later wed King Erik II of Denmark. St. Olav became a link between these families, and he was one of the last saints to be recognized by both the Eastern and Western Church before the Great Schism of 1054 split the Church forever. During the 11th century churches dedicated to St. Olav were raised in both Novgorod and Constantinople.

NIDAROS CATHEDRAL
Nidaros Cathedral was built over the grave of the martyred king, its main altar placed over the site of his burial ever since. During the Middle Ages the golden shrine with the uncorrupted body of St. Olav was placed above the altar. The greatest treasure of medieval Norway after the Protestant Reformation of 1537 was confiscated by the king of Denmark-Norway and melted down for coinage in Copenhagen. However, we do have the receipt from the king's treasurer...

Nidaros Cathedral was begun around 1060 as a modest stone church, but from 1153 it was gradually enlarged until it was completed about 1300. It was then the largest church in the Nordic countries, with a total length of 100 meters and shaped like a cross with 50 meter-wide transepts and a central tower whose spire stretched almost 100 meters towards the sky. English masons were brought to Norway for the construction work, and most of the cathedral was constructed according to the English style, first the Romanesque from around 1150 and then from about 1180 the Gothic. The most special part of the cathedral is the octagonal high choir which was built around the grave and shrine of St. Olav, inspired by the Church of the Holy Sepulchre in Jerusalem and early Christian martyria, especially circular churches in Rome like St. Constanza. The monumental west fagade of the cathedral was built as an English screen front filled with larger-than-life statues. The five remaining statues show clear influence from French sculpture, especially the north portal of Notre Dame de Paris and the nave of Reims Cathedral.

Due to fires, war and the Reformation, the western half of the cathedral fell into ruins during the 16th century, and this miserable situation lasted until the beginning of the 19th century. During the late 19th century the restoration of the cathedral became a national cause in Norway and money for the work was collected all over the country. Naturally, the building also became a national symbol and the location for many national events. For the 900th anniversary of the Battle of Stiklestad and the death of St. Olav the nave was completed, including the great stained glass rose window in the west fagade, consisting of about 10,000 pieces of glass. Among the gifts to the cathedral was the large Mandylion icon from c. 1500 which was donated by a Norwegian businessman who had bought it in the Soviet Union in the 1920s.

Naturally, the Second World War also brought consequences for the cathedral. Even though direct damage was avoided, the cathedral was central in the struggle between the Norwegian Church and the efforts of the Norwegian Fascist Party to gain control of the Church. After the end of the war, the cathedral received several memorial gifts. In the south transept hangs the royal ensign which flew from the mast of the ship bringing our beloved King Haakon VII home from exile on June 7 1945, 40 years to the day since Norway first became a free nation on June 7 1905. Next to it hangs a British naval flag which belonged to HMS McCoy, the first allied ship to reach Trondheim after the Nazi capitulation on May 8 1945. On the wall below this flag hangs a Russian icon of St. George, made in Moscow in 1834. It was donated to the cathedral after the war in memory of Norwegian prisoners sent to the Nazi concentration camps in Germany and Poland.

CORONATION
As a result of the Napoleonic wars, Denmark was forced to cede Norway to Sweden in February 1814. However, Norway put up resistance and declared herself independent. A national assembly gave the country its democratic constitution which is still in force, the oldest in Europe. In November 1814 Norway was forced to join a union with Sweden with a joint king. The constitution also stated that the King of Norway should be crowned in Nidaros Cathedral, and coronations took place there in 1818, 1860, 1873 and 1906. In 1908 the coronation ceremony was abolished by the National Assembly as "old-fashioned", but one part of it, the benediction of the new monarch, is still retained, the latest occasion being in June 1991 when King Harald V and Queen Sonja succeeded to the throne after the death of King Olav V.

In 1814 Norway had no crown regalia. The medieval ones were lost and the Danish regalia kept in Copenhagen. When King Carl Johan (the former French field marshal Jean-Baptiste Bernadotte) succeeded to the thrones of Sweden and Norway in 1818, he therefore had a whole new set of Norwegian regalia made in Stockholm at his own expense and donated them to the nation. The regalia are today used during the ceremony of benediction, when they are placed on the main altar of the cathedral, and when the monarch dies the royal crown and the sword of state are brought to Oslo and placed upon his coffin.

The regalia consist of the king's and queen's crown, orb and sceptre, the anointing horn, the sword of state, the crown prince's crown and the royal standard. The royal crowns are of the closed type, typical of the crowns of the age of absolutism. The crown prince's open crown is the only regalia that was made in Norway for the planned but cancelled coronation of King Oscar I in 1847, and it has never been worn. The coronation accessories also include two thrones, made in Stockholm in 1818 in the Empire style. The newest element is the coronation chair from 1873 with a low back for allowing the coronation robe to be placed around the shoulders of the king and the queen. The thrones and the royal standard are still used for the ceremony of benediction. 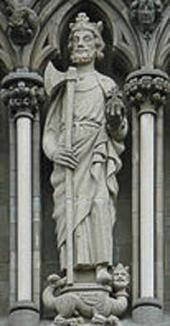 STATUE OF ST. OLAV ON THE WEST FRONT, STINIUS FREDERIKSEN, INSTALLED IN 1973 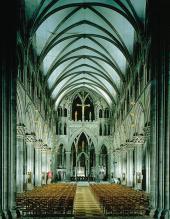 INTERIOR OF THE CATHEDRAL LOOKING TOWARDS THE EAST.
THE IMPRESSIVE CHOIR SCREEN WALL WAS CONSTRUCTED AFTER A FIRE IN 1328

JAKOB MASCHIUS.
THE CATHEDRAL VIEWED FROM THE NORTH. COPPER ENGRAVING. 1661

VIEW OF THE CATHEDRAL IN 1838–1840.
DRAWING BY LEMERCIER, PARTICIPANT OF THE EXPEDITION TO THE NORTH 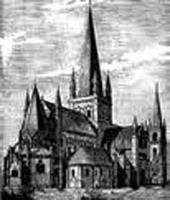 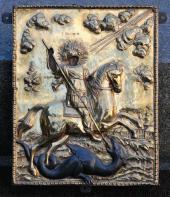 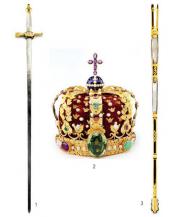