Levitan started using pastel sticks very early on. His youthful pieces such as the images of the little girls Nadya Yakovleva (1880, Russian Museum) and Lena Nenarokova (1880, Tretyakov Gallery) already have delicate pastel inclusions. However, it was not before the 1890s that Levitan's pastel explorations truly reached their creative peak. Among the pastels currently known and dated by the artist himself, "Storm" (1890, private collection, Moscow) is the earliest. From 1890 on Levitan created a number of remarkable pieces which established him as one of the premier masters of pastel art of the late 19th century.

One of Levitan's most charming pastels, "Near Bordighera in the North of Italy", has been traditionally dated to 1890. Before "Bordighera", during his travel in France and Italy in 1890, Levitan created an on-location oil sketch with a cognate composition that belonged to the collector Ilya Ostroukhov1. The artist came across suitable scenery on the outskirts of a small old town populated by peasants and fishermen, and imaged it viewing Italy through the lens of the creative impressions he had amassed during his recent pilgrimage across the Volga region. "That was the same motif of nature connected to human life, the same landscape lyricism of undisturbed existence, only originating from a different, 'foreign' material"2.

Later, when Levitan was working on a pastel featuring the image of the Italian town he was so attracted by, "the foreign material" began to acquire the forcefulness and purity of colour characteristic of the nature of the Southern nation. Undeniably in comparison to its oil counterpart, the pastel piece looks better in terms of the vibrancy of the palette, the colourfulness of the image and its emotional impact.

There is every reason to believe that the pastel "Garden in Bloom" (1890-1893, Tretyakov Gallery) was accomplished after "Bordighera". The similarities between the two works include the intimate lyricism of the scenery which is modest in its simplicity and commonness, and infusions of genre detail and narrative.

Perhaps the "Garden in Bloom" is one of Levitan's rare plein air pastel pieces3. It has been assumed until now that from all of the artist's known pastels only "Spring. White Lilacs (Terrace with Lilacs)" (1894-1895, in a private collection, Moscow) can be also called an on-location sketch. Our guess about the "Garden in Bloom" is based on the "nimbleness" of the numerous energetic and varied brushstrokes seamlessly blending with the painterly outline of the landscape's composition. There also exists another pastel piece, also from a private collection, which was probably created in the open air: the image of a lakeshore, a boat, fishing nets hung out to dry and small sheds in the distance — the same scenery that is represented in the painting "On a Lake" (Radishchev Art Museum, Saratov), accomplished in the summer of 1893 near Tver.

The precious colourful cluster of Levitan's pastels was publicly displayed for the first time at exhibitions in 1893-1894, eclipsing for a while the artist's oil paintings.

The pastel "At Lake Como. Embankment", added to the Tretyakov Gallery's holdings in 1989, was inspired by the artist's second voyage abroad in 1894 and does not have easily identifiable counterparts among his oil paintings. The pastel features an embankment in a park near Villa Carlotta, in the vicinity of the Cadenabbia community by Lake Como4. However, the realistic image of the area and the composition with its seeming fragmentariness typical for a sketch are deceptive. The pastel is not an on-location sketch but a finished, well-rounded and masterfully executed piece. The spectacle of the deserted embankment in the old park in the resort town in rainy weather is filled with subtle lyricism5.

Levitan's pastel still-lifes with flowers, also executed in the first half of the 1890s, are marked by a similar heightened sensitivity to the beauty of the surrounding world. Most of these pieces were created with the intent of being presented to friends as a gift — for instance, "Cornflowers (A Bunch of Cornflowers)" (1894, private collection, Moscow) was presented in 1894 to Varvara Turchaninova. The imagery such as a plain bunch of flowers in an ordinary clay jar is unassuming. However, Levitan developed original techniques for capturing the inimitable allure of the objects he selected. The graphic element prevails in the pastel still-lifes featuring bunches of lilacs (1893-1895, a private collection, Moscow; Vrubel Regional Arts Museum, Omsk). In the pastel "Coleus" (1894, Nesterov Art Museum of Bashkir Republic, Ufa), the pastel-made hatches, some forceful and clear-cut, others only holding in check the alteration of the coloured pastel spots, lend a special expressiveness and ornamentality to the image of the mottle flower leaves spread over a plane. Levitan's previously unknown still-lifes "White Lilacs" (1895) and "Immortelles (Still-life with Immortelles)" (1894; both at the Israel Museum, Jerusalem) belie a quest for greater painterly effects. Meanwhile, the composition "Immortelles", featuring everlastings strewn on a table beside a book, or maybe a diary or a sketchbook, has a narrative element previously absent from Levitan's still-lifes. The symbolism of the imagery can be related to Russian Symbolist poetry of the late 19th century6.

The "Immortelles" foreshadow some of Levitan's later paintings marked by Modernist influences.

Two similarly-named pastels "Autumnal Landscape with a Church" (18931895, Russian Museum; 1893-1895, Tretyakov Gallery) round off the series of Levitan's intimate lyrical pictures. There is no agreement as to what church is featured on them. However, to use the words of Alexander Benois, "Levitan's paintings are not mirror images of different locales or an information log, but Russian nature itself with its inexplicably refined charm, the quiet, modest, sweet Russian nature"7. Taken individually, either version of "Autumnal Landscape with a Church" can significantly enrich Levitan's "autumnal suite", gracing it with pure, vibrant pastel colours and a vivid expressive imagery.

The artist rounded off the enthralling five-year period of pastel painting with a series of pictures featuring wide stretches of open space. The compositions "Flooding" (1895, Tretyakov Gallery) and "Dark Day" (1895, Russian Museum) depict expansive tracts of water, and the composition "River Valley. Autumn" (1896, Russian Museum) is a panoramic view of a river flow. Levitan introduces generalized images of vast expanses of land and water into neat, lean compositions without a complex narrative. The large colour planes superimposed one over another, with intermediate layers of rubbed up pastel, convey width and sweep. Using the entire visual potential of pastel, Levitan masterfully demonstrated in his works a novel "painterly" manner. "He extracted from pastel all that he needed," remarked Fedorov-Davydov, "and now pastel for him is only a variety of painting, oil paint being his medium of choice, preferred over pastel"8.

Indeed, in the second half of the 1890s the artist was using pastel increasingly less frequently, sometimes repeating with pastel imagery from his oil paintings. However, if previously Levitan created his pastels as original and independent pieces using studies he made with oil paints, beginning from the mid-1890s on some occasions he used this medium to tackle challenges he could not properly address in oil painting. For instance, as is well known, the artist spent a lot of time working on the painting "Autumn. Near a Thick Forest" (1895-1898, present whereabouts unknown), redrafting it again and again. In the pastel counterpart of the piece, he came up with fitting spatial arrangements in the composition and highlighted, as he wished to, the young "underwood" in the foreground, the image of which caused him his greatest dissatisfaction in the oil piece.

Yet, it would be incorrect to label the pastels with the imagery from the oil paintings, which Levitan executed in the new, "painterly" style in the second half of the 1890s, as author-made copies produced with the use of a different medium. These pieces are independent and artistically self-contained works. Their main distinction from the oil "prototypes" consists in the very medium of pastel, whose many-hued and rich palette enabled Levitan to heighten the vibrancy and vigor of the colour scheme. Pastel chalks offered to the consummate drawer the opportunities to enrich the imagery and the emotional content of his artwork with graphic techniques. For instance, the pastel "Near a Brook" (1899, Tretyakov Gallery) features a shrub delineated with vigorous dark-green diagonal hatching and the grass canopy over the meadow depicted with tiny light-green hatches of various hues. The gnarled diminutive tree trunks depicted in brown pastel are crafted with a special fineness. The almost "palpable" motion of pastel sticks introduces a lively naturalness into the very simple narrative centered around a calmly flowing brook. In the pastel "Pathway" (1898, present whereabouts unknown) "in our minds, we embrace the nature while embracing the mastery of the craft, and we embrace the lyricism of the imagery while embracing the charm of the visual forms, and this fusion gives us a special pleasure and causes us to linger at this simplest and nicest picture looking at it with concentrated attention"9.

Similar to these pieces mentioned is the pastel "Meadow on the Fringe of a Forest" (1898, Russian Museum), in which Levitan "crafted the soft palette... of the poetic intimate landscape"10, persuasively demonstrating his consummate skills in the form in the representation of feathery white flowers amidst tall grasses on the fringe of a forest.

Levitan's late pastels, such as "Autumnal Day" (late 1890s, Russian Museum) and "Autumn" (late 1890s, private collection, Moscow), belie an apparent striving for spareness of forms and generalized landscape imagery. Contrasts between colour spots in the yellow foliage of birches and dark spruces in the autumnal scenery, which formed a harmoniously balanced imagery in the pastels of the mid-1890s, in these late compositions look stylized and lacking in depth, and the visuals on the whole appear to have a novel, emotional and decorative expressiveness. Levitan's last works belie his new decorative leanings, and it is hard to tell how they would have evolved and what sort of new creative vistas for realizing these leanings the medium of pastel would have opened up for the artist.

Levitan's entire stylistic evolution spanned only one decade: from the intimate lyricism of the unassuming images of the first half of the 1890s to the poetic synthesis in the representations of nature in his late pieces; from graphic design of the compositions to "painterly" and "pictorial" treatment of natural scenery. But all of the artist's pastels are marked by the splendor of their colour design and his excellent command of the craft. 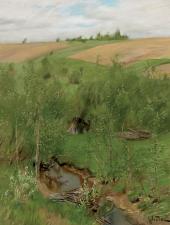