On May 22 2013 a reception was held at the Embassy of Switzerland in Moscow to mark the publication of the special issue of the "Tretyakov Gallery" magazine, "Switzerland -Russia: On the Crossroads of Cultures".

This Swiss-Russian special issue of the "Tretyakov Gallery" magazine is devoted to artists whose lives, creative art or posthumous fame have made them a part of the cul­tures of the two nations.

In his speech the Ambassador of Switzerland, Pierre Helg, noted that over the cen­turies we have been witnessing a constant need for dialogue with one another, including a dialogue in the arts. The special issue of the magazine paid attention, among other sub­jects, to the centenary of the birth of the remarkable Swiss artist Meret Oppenheim.

In his reply Alexander Rozhin, editor-in-chief of the "Tretyakov Gallery" magazine, noted the extra impulse that the publication brought to the strengthening of Swiss-Russian contacts, not only on the diplomatic level, but on the creative and personal levels as well.

Natella Voiskunski, executive secretary and co-editor of the "Tretyakov Gallery" magazine, spoke about the involvement of Swiss and Russian writers in the creation of this effectively "cross-cultural" publication. One of the Russian writers, Irina Nikiforova, mentioned the Alberto Giacometti exhibition that took place at the Pushkin Museum of Fine Arts and how it had emphasized the importance of such international museum connections.The Swiss-Russian publication continues the ongoing international project of the "GRANY" Foundation, "On the Crossroads of Cultures".

The versatility of Norwegian artistic culture, and the ties that grew up between major artistic figures of the two countries are for the first time represented on such a broad scale in the pages of the Nor­wegian-Russian special issue of the "Tretyakov Gallery" magazine, "Norway - Russia: On the Crossroads of Cultures". 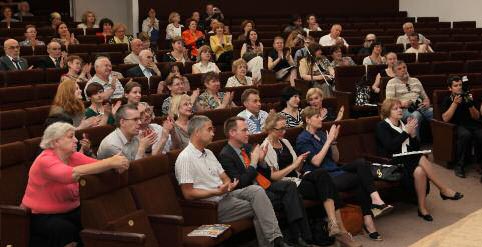 The 150th anniversary of the birth of the world-renowned Nor­wegian painter Edvard Munch (1863-1944) provided fitting inspiration for such a joint initiative. A major exhibition marking the Munch an­niversary had opened in Oslo on June 2 2013.

Among those speaking at the event were the Minister Plenipo­tentiary of the Royal Norwegian Embassy, the assistant chief of the Royal Norwegian diplomatic mission in the Russian Federation Bord Ivar Svendsen; the director of the Tretyakov Gallery, Irina Lebedeva; the curator of the Edvard Munch museum in Oslo, Petra Pettersen; the director of the Gustav Vigeland museum, Yarle Stremodden; the chief editor of the "Tretyakov Gallery" magazine Alexander Rozhin, and its executive secretary Natella Voiskunskaya.

The concert was organized by the Edvard Grieg Society in Moscow.

The unique, effectively encyclopaedic publication is dedicated to the most important personalities of Norwegian culture, and gives a powerful impulse towards the further development of creative con­tacts between cultural figures in both countries. It will find its contin­uation in new exhibition projects, exchange of information, and fruitful cooperation between Norway and Russia.