Andrea Granchi. Heir to the varied artistic traditions of Florence

An Academician and for many years a professor at the Accademia di Belle Arti di Firenze (Academy of Fine Arts of Florence), Andrea Granchi inherited his profession from his ancestors. Natives of Tuscany, his father, grandfather and great-grandfather lived and worked in Florence, where they were among the few craftsmen skilled in woodcarving, as well as gilders and restorers of fine art, both classical and contemporary, frames and furniture.

Since the early days of the Renaissance, Florence always had a number of such families, but the flood of 1966, which engulfed the greater part of this centre of the Italian Renaissance and destroyed or damaged hundreds of art objects and thousands of manuscripts, did not leave such family workshops unscathed: most would never return to their former existence. In such a way entire dynasties of craftsmen came to an end, and only a handful, against all odds, were able to survive, preserving both their implements and their clientele, to continue to practice their generations-old skills. The Granchis are one such family.

In his main line of work - as a painter, a master of fresco and mosaic, and a restorer - Andrea Granchi is an influential figure among his contemporaries; he is also a carver, gilder and art restorer who continues the venerable tradition of generations of Tuscan masters.

His comfortable house also accommodates the family restoration studio: now, three generations on, it is in the hands of Andrea's son, Giacomo, and has expanded its range to include fields such as gold-leaf gilding and the restoration of polychrome and gilded sculptures. Next to the restorer's large working table, there are racks of paintings and easels alongside the time-proven tools of carvers and gilders. The artist's studio as such is in another spacious room, which features his paintings, fragments of mosaic panels, and sketches and cartons made in preparation for frescoes, as well as conceptual sculptural compositions. Born in 1947, Andrea is the diligent custodian of the paintings of his father Vittorio Granchi (1908-1992), a renowned Florentine art restorer and artist, while also teaching his son the skills passed on to him by his forefathers (Giacomo, а musician and acclaimed violinist, is a craftsman of musical instruments, too).

Continuing the family tradition, Andrea Granchi is not only a respected art restorer but also received a professional education in fine art, after which he taught at the Accademia di Belle Arti di Firenze; he became a professor there and was elected an Academician of the Academy of Drawing Arts, an oldest such body in the Western world, where he remains today president of the painting class.

His talent and broad artistic horizons, as well as his knowledge and experience, have undoubtedly informed the evolution of his visual idiom: he is not only a first-class practitioner but also a profound theoretician. This essay, however, will focus solely on the writer's personal impressions and reflections about the singularity of Andrea Granchi's artwork. 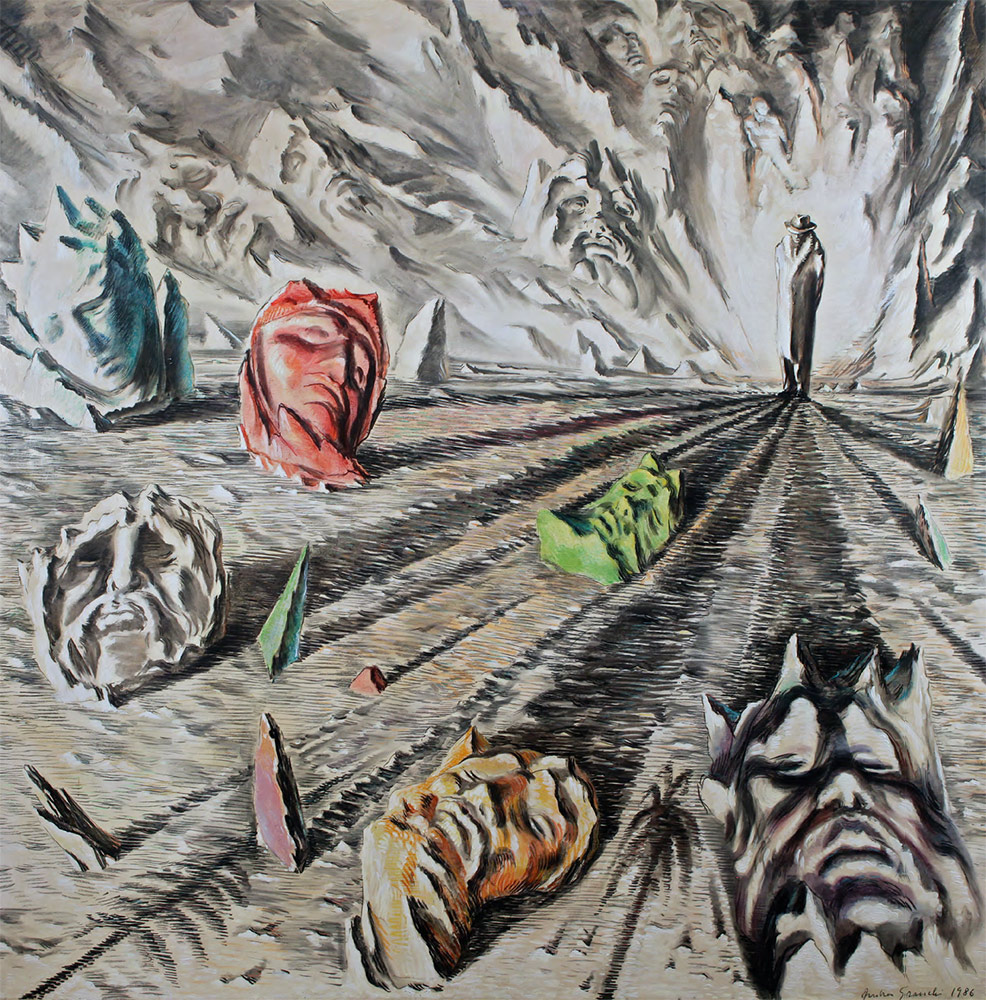 The painter's art is an original combination of the traditions of the Baroque and the Italian metaphysicians Carlo Carra and Giorgio de Chirico, of the legacy of Surrealism, as reflected in the works of Rene Magritte and Salvador Dali, and Abstract Expressionism and op art. Transforming the techniques of visualization and their semantic equivalents, he achieves the special emotional, conceptual and artistic expressiveness that constitutes his style and ensures the originality of his works. Granchi's artistic imagination and philosophical worldview stimulate viewers' fantasy and sensory perception with their ambiguity and concept design, an element that might seem at odds with any narrative logic. The painter's artistic vision opens up new associative vistas for his creativity, which intuitively appropriates not only those traditions previously mentioned but also recalls other eras and cultures. The viewer can discern in his works from different years evocations of the art of Ancient Egypt, of the black-and-red imagery of antique pottery and, at the same time, of certain principles of film-making, including the techniques of using effects of freeze-frame in infinite alternation.

Many of Granchi's works have an element of self-portraiture, both literally and figuratively - here I refer both to self-portraits in their own right and to the abstract visualizations of the reflections of the artist's thoughts and emotions.

The non finite element in the general human and/ or religious sense defines the congruence of real and virtual worlds in the artwork of this Florentine master. His tempera pictures for frescoes, his compositions in mosaic and stained glass, his spatial compositions, and his paintings, watercolours and drawings are the essential material in the conglomerate of the artist's quest and experimentation - material that is transformed into symbolic images and magic signs.

Further reference to the Baroque is surely appropriate here. The brilliant Russian art theoretician and historian Nikolai Punin once remarked: “Emphatically picturesque compositions naturally cause the artists of the Baroque to reconsider their understanding of space. They no longer divide the picture surface into planes, a division that was a typical practice of the artists of the Renaissance. Baroque space has more depth, often rolling on into infinity; it is more holistic and organic, because it evolves within a single visual stream, one that connects people, objects and the landscape into one immediately observable pictorial whole."[1]

All these typological qualities can be found in those compositions executed in the domes and elsewhere on the interior walls of the upper sections of buildings by Pietro da Cortona, Giovanni Battista Gaulli, Andrea Pozzo and other Baroque painters and muralists. Andrea Granchi's monumental compositions attest to an indirect connection with these artists' work.

Some motifs of Baroque architecture are also evoked in the artist's sculptural-spatial works - for instance, in his ornamental corbels and associated decorative elements, which perhaps recall the chimeras or gargoyles of the Gothic period.

In deliberately avoiding any mention of the titles of Granchi's works, and only reproducing some of his creations here, this brief essay leaves room for other opinions about his diverse artwork: featuring many nuances of meanings as it does, it is certain to give rise to complex associations; it does not fit into well-established notions or formulae, although all of Granchi's pieces bear the imprint of their creator's unique personality.

A fine colourist with a keen sense of form and composition, Andrea Granchi handles different media - tempera, oil, watercolour, wood, plywood, smalt, gypsum - with equal technical aptitude. The master's large-scale paintings convey his point of view on things both real and unreal, those related both to this world and to another - and the contrasted, inexplicable coexistence of the two dimensions. The internal aspiration to become free from the force of gravity, to break through into a third dimension is akin to the concepts and discoveries of Lucio Fontana. This is certainly not a matter of comparison or opposition, however, but rather relates to the general motivations that underpin any tactile approach to the insoluble problem of interconnection between the terrestrial world and the universal, boundless cosmic idea of infinity. 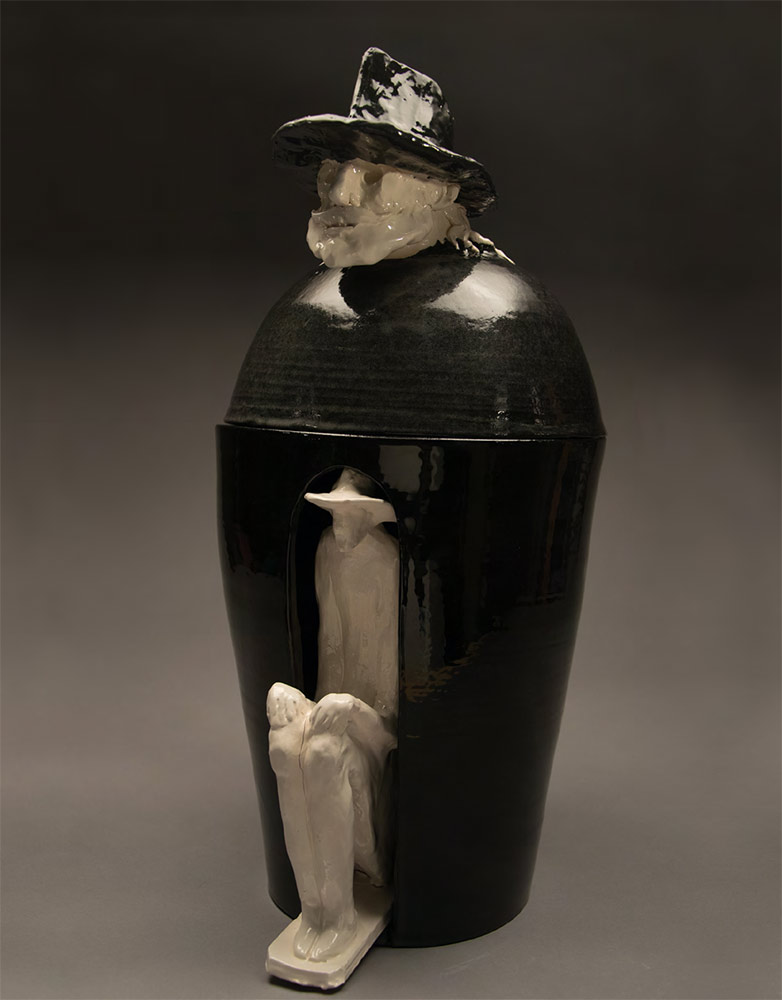 Granchi's dualistic vision, interwoven with his own rationalization of the idea of “unity of opposites", is most vividly reflected in his set of two mutually complementary spatial objects - vases, or canopae (canopic funerary vases of the kind first found in the culture of Ancient Egypt) that are crowned with sculpted portraits of the artist himself in white or black. Each of these vessels features a sitting figure - one has a figure in black against a white vase surface, another, a figure in white against a black surface - emerging from within the “jars": the figures appear to represent two opposite poles of a single personality. This apparent “conflict" between black and white does not involve any element of mutual rejection, rather it is an intuitive application of Kazimir Malevich's dictum that “the distance between white and black covers the entire colour range." This is just a supposition born out of a personal response to the polyphony of Granchi's artwork. These glazed pottery pieces were made in 2018, and in them a certain self-mockery typical for the artist takes on grotesque overtones, becoming sublimated into that supreme form of selfexpression, grotesquerie. These jar-like vessels, these canopae, are essentially the outer shell that conceals the artist's sacred feelings and thoughts.

In 2003-2004, before creating these canopic vases, the artist produced other pieces, such as "Ultimate Encounter (Incontro estremo)". The work comprises a sculptural group consisting of a bust of the artist, with Granchi's ever-present attribute, his hat, together with a small black-and-white figure resembling his own that is approaching the bust as if on some fashion “catwalk". It is somehow a symbol of the conflict between the interior and exterior worlds, which is itself the guiding thread of Granchi's spiritual quest. Relatively simple in itself, the material used in the making of this composition - plywood coated with gypsum - lends to the work, despite its small size, a conceptual expressiveness that is monumental and theatrical.

Granchi's large-sized painted panels, on the contrary, represent the two facets of the artist's personality on a quite different level of visualization. On the one hand, we can feel the swirling gyration of abstract colour masses rising toward a “breakthrough" of light, coming from the infinity of another cosmic dimension towards tiered movements of the world. Such imagery, in my opinion, is suggestive of the concept of Baroque art. On the other hand, some compositions feature a monochrome neutral surface, on which sign-like figures move, arranged in a certain order, resembling cryptograms accentuated by a sculptured assemblage. In such works one can discern an invisible connection with the architectonics and principles of the compositional planar structure typical for the concepts of the lower horizon in Renaissance art, transformed in turn into a language of evocative minimalism.

Naturally, in preparation for these works, the artist created numerous drawings and watercolours that represent in great detail the world as it has appeared to him during his long journey on this Earth. The quantity of such visual objects, taken from nature, gradually reduces. Things real turn into things conceptual; nuances become highlighted.

Although the thoughts presented here are only a subjective point of view, an extrapolation as it were, one hopes that readers, both from Russia and beyond, who are familiar with and appreciate Italian culture of the 20th and 21st centuries - including such outstanding talents as Carra, de Chirico, Alberto Giacometti, Marino Marini, Renato Guttuso, Giacomo Manzu, Giorgio Morandi, Fontana, Arnaldo Pomodoro, Massimo Campigli or Mario Sironi - will also be interested in the art of one of the most distinguished masters of this group, the Florentine master Andrea Granchi. 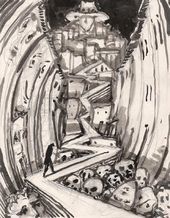 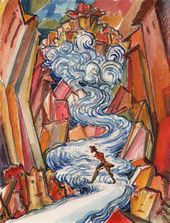 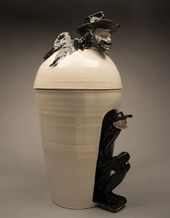 Andrea GRANCHI. Vase-canopa with the author’s effigy on the lid, with black animula
Ceramics, smalt. 51 × 25 × 30 cm

Andrea GRANCHI. White and Black Watch What's Left from the Battle of Anghiari (Homage to Leonardo). 2019
Oil and tempera on canvas. 150 × 200 cm