Russian and international readers are presented with a panorama of Spanish art spanning the period from antiquity, through the Middle Ages and on to modernity. Some of the articles published here have been written by famous Spanish art historians especially for this special issue. Their writings are matched by articles from recognized Russian scholars highlighting the close relationship between Russian and Spanish culture.

Interest in Spanish culture in Russia has been strong for centuries. It was so great that in the 19th century a verb, "to Don-Quixote", appeared, along with the noun "Don-Quixotism", and entered the Russian language: "Don-Quixotism" is "a symbol of noble-mindedness and idealism, the aspiration to do good to people in the name of unattainable ideals". Thus, the great Russian writer Ivan Turgenev in his speech "Hamlet and Don Quixote", delivered on January 10 1860, posed the question, "What qualities does Don Quixote embody?" The answer was: "Faith, above all..."

Spain inspired Alexander Pushkin to create lyrical masterpieces, and "The Stone Guest", one of his four "Little Tragedies", is based on the legend of Don Juan. This year the travelling exhibition "Pushkin and Spain" will tour Madrid, Malaga, Alicante, Valencia, Tarragona and Barcelona. Meanwhile in Russia, the Tsaritsyno Museum has opened the exhibition "Don Quixote in Russia and Don Quixotes on the Throne".

The "Tretyakov Gallery" Magazine thanks His Excellency D. Jose Ignacio Carbajal, Extraordinary and Plenipotentiary Ambassador of Spain to the Russian Federation; the general sponsor of the "Tretyakov Gallery" Magazine, Mr. Vitaly Machitski; President of the GRANY Foundation, Mrs. Irina Machitski, as well as all our Spanish and Russian colleagues for their contributions to the project. 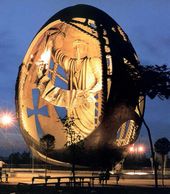 ZURAB TSERETELI. Monumental composition "The Birth of the New Man". 1995.
First part of the project "How Europe Discovered America", dedicated to the 500th anniversary of the historical voyage of Christopher Columbus to the American continent. Bronze, copper, steel. H 45 m. Seville, Spain 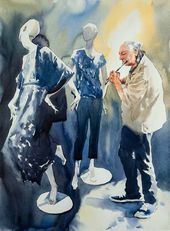