Russian paintings in the Latvian National Museum of Art

The Latvian National Museum of Art has a branch museum, the Riga Bourse Art Museum which opened in 2011 and displays foreign art. The Riga Bourse is also home to a collection of Russian paintings, graphics, sculpture and items of applied arts, which is the largest in the Baltic countries. The history of the collection's formation dates back to the mid-to-late 19th century. Riga then had two collections of art open to the public — the Riga City Painting Gallery (since 1869) and the "Kunstverein", or the collection of the Society for the Encouragement of the Arts (since 1872), hosting works by Russian artists alongside works by artists from other countries. Items reached the Riga collections by different routes.

Tn the 19th century Latvia formed part of the Russian Empire, and historical and political circumstances quite often defined aspects of artistic life. Thus, in 1884 the St. Petersburg Imperial Academy of Arts sent works from its collection to the Riga City Painting Gallery and other provincial collections of the Russian Empire. The works sent to Riga included the seascapes "Sunset at Sea" and "View of the Golden Horn. Constantinople" by Ivan Aivazovsky, the famous seascape painter, and other works by Russian artists. Two years later Aivazovsky, after his exhibition in Riga, donated his splendid seascape "Mist over the Sea" to the Riga Gallery.

In 1894 the gallery received Karl Briullov's "Portrait of Georg von Kleberg", painted in Rome in the 1830s, which came from the Kleberg family and is now one of the best paintings in the collection, and a year later "Cardinal and Abbot" by Alexander Rizzoni, previously owned by a private individual. Under the terms of the will of Ludwig Kerkovius, a Mayor of Riga, Alexei Bogolyubov's "View of the Lighthouse and the Pier in Treport" followed in 1904. Apart from receiving works by artists of both realistic and academic trends held by private individuals, the gallery also acquired them at exhibitions. Thus, it bought Henryk Semiradsky's "Portrait of a Young Woman" in 1896 and Nikolai Kasatkin's "At the District Court" at the 25th "Peredvizhniki" (Wanderers) exhibition which took place in Riga in 1897.

The Society for the Encouragement of the Arts was also increasing its collection of works by Russian painters, receiving in 1874 Alexander Rizzoni's "Roman Eatery", while Alexei Bogolyubov's "Naples Harbour at Moonlight" had been part of its collection since as early as 1889. The artist also donated two landscapes by Vladimir Orlovsky to the Society in 1887. After a posthumous exhibition of works by Isaak Levitan in Riga in 1901, the Society bought his "Landscape with a Train". In the 1870s, the Riga-born painter and graphic artist Georg Wilhelm Timm, well known in Russia and Germany, donated a large collection of graphics and paintings by Russian artists to the Society. Later, in 1904, 1905 and 1914, Timm's heirs offered the master's artistic heritage to Riga's museums, including about 300 paintings and graphics, and majolica items.

September 1905 saw a highly important event in the cultural life of Riga and the whole Baltic region — the opening of the Riga City Art Museum located in a historicist-style building planned and constructed by Wilhelm Neumann, a German architect and historian, which has become an architectural ornament of the city. The museum comprised the above-mentioned collections and a collection by Wilhelm Friedrich Brederlo. It is interesting that, while museum director, Neumann, who was rather conservative in his views on art, enlarged the museum's collection by purchasing "Young Woman with Flowers and Fruit" by the Russian artist Ilya Mashkov, which was exhibited in Riga in 1910 at an exhibition by an avant-garde association "The Union of Youth", and was innovative for that time.

In 1919, when Latvia was declared an independent country, Vilhelms Purvitis became director of Riga City Art Museum, and the period that followed was marked by the active formation of the national Latvian art collection. However, the Russian art collection grew as well, since the museum was buying works by Russian painters and graphic artists — Sergei Vinogradov, Nikolai Bogdanov-Belsky, Konstantin Bogaevsky and others — at exhibitions. At the same time, the State Art Museum's collection was also growing, its purchases in the 1920s-1940s including works by Russian artists ("Landscape with a River and a Fisherman" by Alexei Savrasov, "Troika" by Nikolai Sverchkov, paintings by Sergei Vinogradov, Konstantin Korovin, Vasily Surikov and others).

After 1945 both museums were given different names and their collections divided. All the works by Russian artists went to the Riga City Art Museum, which was now called the State Museum of Russian and Latvian Art.

From the late 1940s to the 1960s a representative collection of Russian and Soviet art was required for ideological reasons, and it was during that period that the main part of the present Russian paintings collection was formed. The museum received works from the Moscow and Leningrad purchasing commissions, and alongside works with little artistic value the collection was enhanced by true masterpieces: "Landscape with a Rainbow" by Alexei Savrasov, "On the Terrace" by Konstantin Korovin, "Russian Peasant Women" by Filipp Malyavin, "Portrait of E. Sabashnikova" by Vasily Surikov, and works by Boris Kustodiev, Vasily Perov, Ilya Repin, Kuzma Petrov-Vodkin and others. One of the best items of the Soviet era is Alexander Deineka's monumental "Lunch Break in Donbass", while another of his paintings, "Boys at Rest", was donated by the artist himself after his personal exhibition in Riga in 1967.

At the same time, the museum acquired works of art from private individuals, while many were donated. In the 1950s-1980s the collection was enriched with works by artists from the Soviet Republics, including Ukraine, Azerbaijan, Armenia, Byelorussia, Estonia and Lithuania. The 1970s marked the start of a collection of Russian icons, now including more than 100 items from the 16th to the early 20th centuries.

Every collection has some works with an interesting, almost incredible history. One example is the painting "Philemon and Baucis" by Orest Kiprensky — the most valuable canvas of the collection. During the restoration of a painting by an unknown artist, representing a mythological scene, it was discovered that the work was signed by Kiprensky (it is known that the young artist had been awarded a minor gold medal by the St. Petersburg Academy of Arts for this painting). During the early-to-mid 19th century the work was in the collection of the patron of arts Pavel Svinyin, but then disappeared for many years. In the 1960s the canvas was owned by a private individual as a work by an anonymous artist, and was bought by the museum, before restoration unveiled Kiprensky's signature.

The collection includes separate groups of works by Russian artists connected to Latvia: Nikolai Bogdanov-Belsky, Sergei Vinogradov and Konstantin Vysotsky emigrated to Riga in the early 1920s. Latvia became their second motherland, and they worked there actively and successfully, taking part in local exhibitions and teaching. One of the most interesting and balanced collections is represented by works by Nicholas Roerich, its history linked to the Roerich Society which was active in Riga in the 1930s. The artist, who then lived in India, chose his best paintings for the Latvian Roerich Society, wishing that a collection of his works should remain in his ancestors' motherland.

The Russian art collection also includes a few sculptures by Ivan Vitaly, Mark Antokolsky, Alexander Opekushin, Yevgeny Lansere, Sergei Konenkov and Vera Mukhina and ceramics by Mikhail Vrubel. A large graphics collection comprises drawings, watercolours and printed graphic works of the 18th-20th centuries, represented by the genre's leading masters. A collection of propaganda china of the 1920s with works by the Latvian sculptor Teodor Zalkaln is the core of the decorative and applied arts collection.

The specific character of the Russian art collection of the Latvian National Museum of Art is in its variety and the absence of any clear concept of its formation. Historically, its basis was formed by realistic paintings of the 19th-early 20th centuries, while another important part is represented by sketches for major paintings by Russian masters, such as "Boyarina Morozova" by Vasily Surikov, "Inconsolable Grief" and "Christ in the Wilderness" by Ivan Kramskoi, and "A Parisian Cafe" by Ilya Repin. The collection includes works by such masters of the early 20th century as Nadezhda Udaltsova, Alexandre Benois, Zinaida Serebryakova, Yury Annenkov and others, which give a better idea of their artistic activity during emigration. 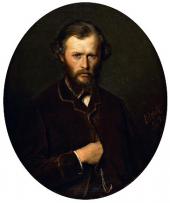 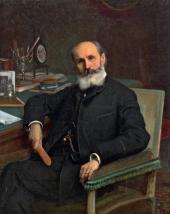 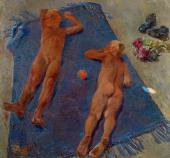