Russian painting in the collection of the Lithuanian Art Museum

The painting collection of the Lithuanian Art Museum includes about 300 canvases by famous Russian artists, reflecting the main trends of Russian art, which reached the museum in various periods and under various circumstances.

Some of the paintings came to Lithuania as early as the 19th century. After the third partition of the Polish-Lithuanian Commonwealth, Lithuania became part of the Russian Empire, Wilno (Vilnius) University was closed and the St. Petersburg Academy of Arts became the main educational institution where students of the university arts department went to finish their studies. Returning to Wilno after graduation from the Academy, they quite often brought back works by their teachers or young Russian artists, their friends and fellow students at the Academy. For instance, the collection of the painter Boleslav Rusitsky had a "Madonna and Child" by his teacher Fyodor Bruni, now in the Lithuanian Art Museum. Artistic collections at Lithuanian noble estates also included paintings by Russian artists, although not in significant quantity. Local art-lovers used to prefer land- and seascapes by Ivan Aivazovksy, Arkhip Kuindzhi and other Russian landscape artists.

For political reasons, Lithuanian noblemen did not show much interest in Russian art, which in the 19th century was preferred mainly by Russian merchants and high-ranking officials living in Lithuania, who quite often were art connoisseurs and collectors. Canvases by Russian artists hung in the houses of Prince Ludwig Wittgenstein, a Russian army colonel, Iosif Semashko, Metropolitan of Lithuania and Wilno, and others. The richest private Russian art collection was owned by Alexander Zhirkevich, a military law historian and writer. Among other works, it contained a portrait of Pavel Kukolnik, a Russian poet and history professor at Wilno University, by Karl Briullov, and paintings by Ilya Repin, Vasily Tropinin, Alexei Venetsianov, Ivan Shishkin, Ivan Aivazovsky, Isaak Levitan and Vasily Vereshchagin. In 1918 Zhirkevich moved to Simbirsk and in 1922 donated his collection to the Simbirsk (renamed Ulyanovsk in 1924) Art Museum, where it remains to the present day.

Officials of Tsarist Russia were interested in spreading Russian culture throughout the territory of the former Lithuanian Princedom ("the NorthWest"). After the suppression of the 1831 and 1863 insurrections an official Russification policy was launched, with Russian artists invited to Lithuania to work on official artistic orders. Wilno public art collections were also revised: in 1865, the most valuable works of art, reflecting the history of the Great Lithuanian Princedom, were moved from the Wilno Ancient Museum to the Rumyantsev Museum in Moscow. They were replaced by portraits of Russian Tsars and officials, painted by Russian artists and including a portrait of the Metropolitan Iosif Semashko by Konstantin Makovsky, a portrait of Pompey Batyushkov, a trustee of the Wilno educational district, by Nikolai Koshelev, and a portrait of Mikhail Muravyev, Governor-General of Wilno, by Nikolai Tikhobrazov (all are now in the Lithuanian Art Museum).

To replenish the collection of the Ancient Museum, modified by the new authorities, the St. Petersburg Academy of Arts sent a few paintings to Wilno in 1885, including "The North Sea by Night" by Arkhip Kuindzhi and "Village Road" by Vasily Piskunov, which later formed part of the Lithuanian Art Museum's collection.

On the initiative of Ivan Kornilov, a trustee of the Wilno educational district, a drawing school was opened in Wilno in 1866, headed by Ivan Trutnev, a graduate and academician of the St. Petersburg Academy of Arts who followed the academic tradition complemented by certain principles of realistic painting, which he taught his students too. Apart from Trutnev, the Drawing School had other Russian artists as teachers, for instance, Ivan Rybakov, Sergei Yuzhanin and Nikolai Sergeev-Korobov, representatives of the young generation of the Academy of Arts graduates, who would introduce their students to plein-air painting, which was close to impressionism, and propagated the renewal of art.

In 1873, the first "Peredvizhniki" (Wanderers) exhibition was organised in Wilno, with the active participation of Russian artists in Lithuania. On Trutnev's invitation, in 1876 Vasily Vereshchagin sent 17 of his landscapes to be displayed at a Wilno art exhibition (four of them were sold). Exhibitions of works by Ivan Pelevin and Ivan Trutnev took place the same year. In 1900, Vereshchagin's personal exhibition was organised in the Governor's Palace with views of India, the Crimea, Transylvania and others of his travel destinations.

In 1907, the Wilno public could make their own judgment of trends of modernism and symbolism represented by artists of the "Mir Iskusstva" (World of Art) movement, at the "Views of Vilna" exhibition displaying city views by Mstislav Dobuzhinksy, an outstanding master of the World of Art group, who was Lithuanian by origin. Dobuzhinsky spent his childhood and youth in Wilno and later returned there often. In 1923 he took part in an exhibition in Kaunas, and in 1929 settled there for almost ten years, taking an active part in Lithuania's cultural life.

In the first decades of the 20th century the Wilno public had an opportunity to acquaint themselves with the Russian avant-garde. In 1909-1910 the exhibition "Impressionists — A Triangle", organised by Nikolai Kulbin, a pioneer of the Russian avant-garde, was brought to Wilno from Petersburg. Apart from works by Kulbin himself, it displayed those by David Burliuk, Vladimir Burliuk and Vladimir Baranov. In 1914-1915 an exhibition of works by Alexei Yavlensky and Marianne Werefkin, Russian artists belonging to the "Blue Rider" Munich expressionist group, took place in Wilno where Werefkin had spent part of her youth, when her father, General Vladimir Werefkin, served there.

The Lithuanian Art Museum's collection received works by Russian artists both from Vilnius public collections and private individuals (many works by Trutnev were in Byelorussia, in the Ivan Lutsevich (Yanka Kupala) museum). In 1946-1960 many works by Russian artists were sent to the Lithuanian Art Museum from Moscow and Leningrad: by the Management of Art
Exhibitions and Panoramas of the Art Committee under the Council of Ministers of the USSR, or by the Moscow and Leningrad Purchasing Commissions. These items form the major part of the museum's Russian painting collection, representing the work of the most famous Russian masters: a portrait of Sergei Kushnikov, a former Military Governor of Moscow by Vasily Tropinin (dated 1826; a second portrait, dated 1828, is kept in the Tropinin Museum in Moscow), the large-scale "The Kronstadt Roadstead" by Alexei Bogolyubov, landscapes by Lev Lagorio and female portraits by Ivan Makarov and Konstantin Makovsky. Makovsky's "Children in a Rye Field" echoes one of the themes of his "Peasants' Lunch in a Field", created a year earlier and now in the Taganrog Art Gallery.

The museum's collection includes a few works by the best-known artists of the "Peredvizhniki" (Wanderers) group, with Vasily Perov, Alexei Korzukhin, Nikolai Yaroshenko and Ilya Repin all represented by portraits. There is a sketch "Head of a Nun" by Vasily Surikov for the painting "The Tsarevna Visiting a Nunnery", dated 1912 (in the Tretyakov Gallery), and a "mood landscape" by Alexei Savrasov, the expressive "Twilight. Losiny Island".

The symbolism of the late 19th and early 20th centuries is represented by works by World of Art members Anna Ostroumova-Lebedeva and Boris Kustodiev; the impressionistic works of the masters of the Union of Russian Artists include those of Konstantin Korovin, Konstantin Yuon, Arkady Rylov and Sergei Vinogradov. The Russian avant-garde is represented by paintings by Pyotr Konchalovsky, Pavel Kuznetsov, Kuzma Petrov-Vodkin, David Burliuk, Alexander Osmerkin and others.

Isolated arrivals and purchases continued in later years. In 1973 the museum received the collection of the culturologist Edmundas Lautsevichus, including works by Russian artists Vladimir Borovikovsky, Orest Kiprensky, Pyotr Sokolov, Mikhail Terebenev, Valery Yakobi and others.

Despite their heterogeneous nature and lack of outstanding masterpieces, the Russian art collections of Estonia, Latvia and Lithuania nevertheless outline the historical development of Russian art in the museum collections of those countries. Their contents reflect the fact that they were formed mainly in the periods when these lands were first provinces of the Russian Empire, and later republics of the USSR — in other words, parts of a zone in which Russian culture was disseminated.

Another part of the collections consists of works which changed hands or lost their owners during the hectic years after the 1917 Revolution, and the collection of the Art Museum of Estonia is the most interesting in this respect, due to the fact that the 1920s played a significant role in its formation, which is not the case in Lithuania or Latvia. The Riga collection is certainly the most remarkable as far as its contents and value are concerned, a direct consequence of Riga having been the economic and cultural centre of the Baltic (Ostsee) provinces during the whole of the 19th and early 20th centuries. That was the place to which artists and artistic groups would bring exhibitions, with a city gallery and a museum from as early as the mid-19th century.

Vilnius also hosted many Russian art shows but somehow only very few of the works exhibited have enriched its museum collection. From the point of view of studies of Russian art as such, the most interesting part is represented by work done in the final creative years of the Russian artists who emigrated to the Baltic countries after 1917, since this part of their heritage is not that widely known. The history of the formation of the collections allows us to include them in the wider canvas of the history of, and changes in perspectives on, art and artistic taste, and to discover often unexpected links between art and political events.

Mstislav DOBUZHINSKY. Scenery sketch for the opera by Pyotr Tchaikovsky “The Queen of Spades” in the State Theatre in Kaunas. 1934
Pencil, tempera, Indian ink on paper. Lithuanian Theatre, Music, and Cinema Museum 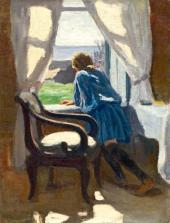 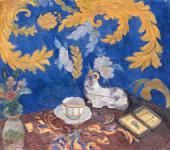 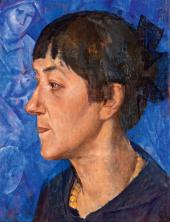 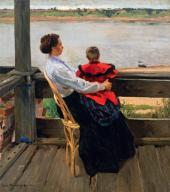 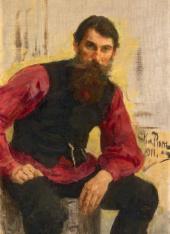