Russian art in the Art Museum of Estonia

Russian art forms one of the most significant parts of the Art Museum of Estonia's foreign art collection in terms of both the number of exhibits and their artistic and historical value. It includes about 350 paintings, 120 sculptures, 870 engravings and drawings and around 200 items of applied art, created between the 17th century and the 1950s. Despite the large number of works, they do not form a single whole reflecting the development paths of Russian art, but are rather a reflection of the complicated history of the formation of the collection. The museum's Russian art collection includes both valuable works by famous masters and unassuming creations by third-rate, nearly forgotten painters. Many items in this collection need complementary research, attribution or reattribu-tion, or closer definition of a work's title or creation period.

The tradition of collecting Russian art in Estonia is not old. The collections of the Baltic Germans included almost no works by Russian artists (apart from those from the Russian academic school who were linked to this area by their origin or family connections). The most outstanding exception to this rule was an artistic collection in the Fall (now Keila-Joa) estate of the Benckendorff-Volkonsky family, famous in the 19th century for its rich Russian art section. It was dominated by works by Russian artists of the early-to-mid century, patronized to some extent by Alexander Benckendorff. Unfortunately, almost the whole collection left Estonia in the 1920s, and the last works were taken by the Volkonskys with special permission from the Soviet authorities when the family emigrated in 1940. Only two items from the Fall's "old" collection — a painting, "Old Man with a Sheep" by Alexei Tyranov and a marble bust of Zinaida Volkonskaya by Pietro Tenerani — were offered by the Volkonskys to the Tallinn Art Museum. Local collections were also a source of many portraits of the Russian Tsars received by the museum in the 1920s from former state institutions and offices. Most of them are standard half-length portraits of the Emperors but there are also custom-made ceremonial full-length ones, which apparently used to hang in the Governor's Palace or the Knighthood House in Vyshgorod.

During the first period of Estonia's independence and the Soviet period, the museum received artistically valuable works by Russian artists mainly from Russia. The core of the collection is formed by the works which arrived in Estonia after the liquidation of the Petrograd control and optation commission in 1921. In accordance with the Tartu peace treaty of 2 February 1920, the commission was charged with issues of the optation (return to Estonia) of ethnic Estonians who had been living in St. Petersburg (Petrograd) before the revolution. The resources received from the commission's property sale and optants' payments for their property transportation were invested in works of art which, unlike the Soviet ruble, had a stable value and were widely available in Russia during the Civil War.

In total, 84 paintings were bought, of which a considerable part were works by Russian artists, including "Portrait of an Unknown Lady" by Dmitry Levitsky, "Portrait of the Princess Yekaterina Dashkova" by an unknown artist, "Soldier's Tale" by Ilya Repin, "Portrait of an Old Peasant" by Ivan Kramskoi, "Pine Forest" by Ivan Shishkin, "Portrait of an Unknown Man" by Alexander Varnek, "Caucasian Landscape" by Lev Lagorio, "Poem" by Konstantin Korovin, "Village Yard" by Valentin Serov and others. The valuable artistic items brought from Petersburg belonged to the Estonian treasury and were meant for sale to replenish its coffers. Following requests from museum employees and cultural figures, the Ministry of Education bought the whole Treasury collection (91 paintings in total) to enrich the main funds of the Tallinn Museum.

In subsequent years the collection grew thanks to works received from official institutions, purchases and donations. Unfortunately, there is no precise information about the origin of those works, since the museum's archives were destroyed during World War II. Towards 1925, when the museum's profile changed from regional studies to art, its collection had more than 300 paintings, including 61 works by Russian artists. The museum's first permanent exhibition (1927-1929) displayed 37 paintings by 23 masters of the Russian school (most are still in the museum, although some were lost during the war): Dmitry Levitsky, Vladimir Borovitsky, Giovanni Battista Lampi, Sylvester Shchedrin, Alexander Orlovsky, Orest Kiprensky, Alexei Bogolyubov, Bogdan Willewalde, Alexei Savrasov, Lev Lagorio, Karl Wenig, Mikhail Clodt, Pyotr Vereshchagin, Ivan Kramskoi, Konstantin Makovsky, Vladimir Orlovsky, Alexei Kharlamov, Ilya Repin, Pyotr Sukhodolsky, Rufim Sudkovsky, Joseph Krachkovsky, Stepan Bakalovich and Konstantin Kryzhitsky. During the war the museum received many works of art from private collectors, both as donations and deposits for evacuation, or to provide shelter for artistic treasures. In 1945-1949 the collection increased further with a number of works considered "ownerless" due to circumstances of war and post-war repression. Those were mainly unassuming paintings from private collections — the most remarkable among them are a sketch "Forest Meadow" by Ivan Shishkin, "Village Children" by Leonid Solomatkin, "Rough Day" by Viktor Zarubin, "View of a Suburb" by Sergei Vinogradov and "Landscape" by Nicholas Roerich.

When, after the war, the museum reopened in the buildings of the Kadriorg Palace, it received a number of items which before the war had been in the chancellery of the President of the Republic, where after 1946 the Presidium of the Supreme Soviet of the Estonian Socialist Republic was located; those items included "Forest Edge" by Ivan Shishkin and "Portrait of the Great Princess Yekaterina Alexeevna on a Horse" by Kirill Golovachevsky. In the 1940s-1950s the Art Museum's collection was enriched with paintings from the Estonian National Museum in Tartu (which was transformed into the Ethnographic museum), including some works by artists of the Russian school: "At the Udrias Coast" by Nikolai Dubovsky, "Portrait of Peter III" by Alexei Antropov (?), "The Last Supper" and "The Crucifixion" by Georg Gsell. In 1949 works that had been evacuated from Estonia during the war returned from Leningrad, including 35 paintings by Russian artists, like "Woman in a Floral Shawl" by Alexander Makovsky, landscapes by Ivan Welz, "Portrait of a Boy" by Ivan Makarov, "Spring Landscape" by Andrei Schilder, "A Grandfather with His Grandson" by Vasily Golynsky (?) and others.

An especially important role in the formation of the Art Museum's Russian collection has been played by items received during the first decade after the war when many works of art were brought here from the central institutions of the Soviet Union, first of all from the Art Board, and from the Moscow and Leningrad purchasing commissions. Those were mainly either socialist realism works by contemporary artists, or Russian artistic heritage. The origin of those items is, unfortunately, not always clear: some paintings have labels on their back, indicating that they belonged either to the Management of Art Exhibitions and Panoramas of the Art Committee under the Council of Ministers of the USSR, or to the collections of the Russian Museum or the Tretyakov Gallery.

Thus, the Tallinn Museum received two paintings, "Portrait ofthe Artist's Wife" and "Girl with a Doll" by Kuzma Petrov-Vodkin, "View of the Palace Bridge" by Alexander Beggrov, "Rye Field" by Arkady Rylov, "Portrait of E. Skaryatin", attributed to Orest Kiprensky, and 13 sculptural portraits of cultural figures and heroes of socialist labour, which had formed part of the Russian Museum's collection. Identification tags from the Tretyakov Gallery are on the paintings "Lake Ladoga" by Stanislav Zhukovsky and "Cossack Village Mikhailovskaya" by Ilya Mashkov and on eight busts of Communist Party leaders and cultural figures (including busts of Lenin by Nikolai Andreev, and a bust of Maxim Gorky by Vera Mukhina). The first items arrived from Moscow and Leningrad as early as 1946, the last in 1958. It was during that period that the main part of the paintings by Russian artists of the early 20th century, displayed at the exhibition "Unknown Masterpieces...", arrived in the museum's collection: apart from the above-mentioned works by Petrov-Vodkin, these were his "Samarkand Motif", "Winter Day" by Nikolai Fokin, "Girl in Red" by Abram Arkhipov, "Dandy with a Lorgnette" by Mstislav Dobuzhinsky, "Capri" by Grigory Bobrovsky, "Children on the Beach" by Valentin Serov, "Girl in a Pink Dress" by Osip Braz, "Paris by Night" and "Tea-house in Crimea" by Konstantin Korovin, "Oil Towers in Baku" by Anna Ostroumova-Lebedeva, "Young Naturalist" by Alexei Pakhomov, "Nun" and "Easter Night" by Boris Kustodiev, "New Moon in May" by Konstantin Yuon, and "Bakhchisarai" by Alexander Kuprin.

Over later decades the Russian art collection was complemented with a few purchases and donations.

A separate collection consists of Russian icons which reached the museum in the 1960s-1980s either from private collections (mainly that of Nikolai Kormashov), from the Customs Administration or the Tallinn City Council Financial Department (confiscated icons), or from the Ministry of Culture (icons removed from churches which stood empty or were turning into ruins). 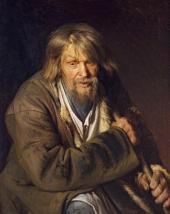 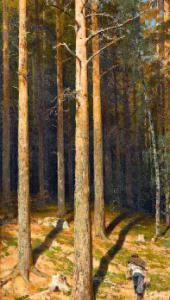 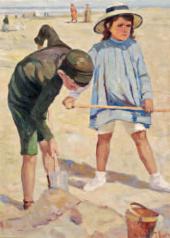 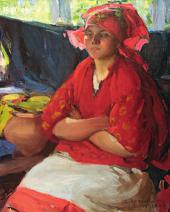 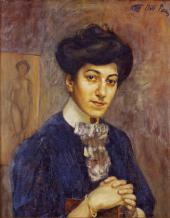 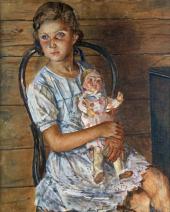