The first winner of the Plastov International Prize Vladimir Telin, a People’s Artist of Russia, is the last surviving member of the “spectacular Moscow foursome” that emerged in the 1970s, which included Nikita Fedosov, Vyacheslav Zabelin, Vladimir Scherbakov and Telin himself. Telin’s transparent and comprehensive creative evolution and his personal artistic style represent an unexplored, versatile and life-affirming “continent” in the landscape of Russian art.

Many of Telin’s works are characterized by their innocent parable and allegory. What could be more everyday and unaffected than his spirited, slightly folksy painting “GUM, TsUM and Detsky Mir” (alluding to the three oldest central shopping malls of Moscow — the State Universal Mall, the Central Universal Mall, and the “Children’s World” store)? The viewer is amazed by the painting’s striking multicolour, pliable harmony, as well as the characteristic intricate folkloric landscape of Moscow’s ancient Kitai-Gorod, the background to endless processions of colourful characters who came to the capital from the Soviet provinces to buy the “big city” coats and boots!

The harmonious inversion and semantic versatility of motifs in Telin’s graceful, expressive paintings is characteristic of both his larger- and smaller-scale work (paying hommage to the traditions of Alexei Venetsianov, Grigory Soroka, Alexei Savrasov and Leonid Solomatkin); the paintings of the “component genre” are equally evocative combining as they do decorative secondary landscape, still-life and architectural compositional elements.

The evolutional logic and the artist’s style are indeed clear; however, this clarity is not easily analysed, and it can create a feeling of peculiar vagueness, of something not rationally explicable — since the unsteady, initial, and “unverified” impressions invariably lead us to a certain solid ground, a reliable point of reference which we find deep within our souls. This should not come as a surprise — the Russian viewer is still raised on folk and fairy tales and has not entirely lost the connection with the national cultural tradition, making the conventional visual storyline of the artist’s paintings powerful.

Contemplating the parables and symbols of Telin’s realistic images, it is hard to shake off the feeling that his quiet voice is indeed unique. His newer large-scale canvases, such as “A Kind Man”, “Rainbow at Night”, and “The Return”, significantly alter his previously established textbook image of an artist of small-scale genre paintings, and remind us that such works as “Refugees” and “On the Water” were not exceptions.

At the same time, we cannot help paying attention to the unique complexity, subject matter and relevance of the creative and aesthetic phenomenon that Telin’s “small-scale genre paintings” constitute, since through this art form he revives one of the leading genres of Russian realist classical art, which practically disappeared during Soviet times.1 The very definition of Socialist realism as “showing reality in its revolutionary gust” excluded the subtle and personal quest for the meaning of life from the sphere of Soviet aesthetic priorities. The updated “austere style” only served to solidify this tendency by transforming even the most private everyday motifs into monumental, symbolic cliches. It was those art forms of “introspective space” that naturally and logically lead to the living, quiet, real miracles in Telin’s paintings.

There are so many revelations and urgent creative challenges in Telin’s art that it is impossible to touch upon or analyse all of them in a brief essay. However, from the abundance of diverse and meaningful impressions, there emerges an image of a remarkably solid, generously gifted, extraordinary contemporary Russian artist, a romantic master at the turn of centuries and eras, and one who was destined to struggle with the most difficult challenges — to maintain and revive the disintegrating link between eras. 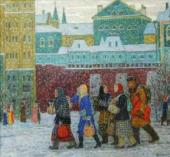 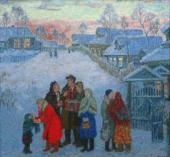 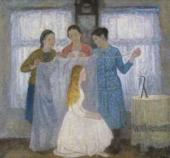