“I Yearn for Strange Lands”

The exhibition “From the Western Seas to the Very Gates of the East. Russia at the Time of Pushkin” - a look at the Russian Empire as it was seen by Alexander Pushkin and his contemporaries - has been one of the most memorable events of 2010 at the Pushkin Museum in Moscow.

Over the nearly 50 years of its existence, the Pushkin Museum has been acquiring paintings and drawings featuring locales where the poet stayed in his lifetime. “I yearn for strange lands, perhaps the midday air will invigorate me,” wrote Pushkin in 1820 setting out, involuntarily, on a journey across Russia’s southern fringes: the Crimea, the Caucasus, the Trans-Caucasian region, Bessarabia, and Ukraine. This protracted journey was the first in the long line of the poet’s wanderings across his homeland. “I need this travel both morally and physically,” he wrote in 1833, when his journeys already totalled dozens of thousands of versts (the verst was then the equivalent of 1.06 kilometres), and he still had another long stretch to cover — the road to the Urals, the scene of Emelian Pugachev’s rebellion.

In total Pushkin travelled about 35,000 versts through Russia. Moscow, St. Petersburg, the province of Pskov, the Upper Volga, Nizhny Novgorod and its environs, Ukraine, Moldavia, the Caucasus, the Trans-Caucasian region, the Volga region, the Urals... Such is by far a complete list of the areas visited by the poet. The road, passage, motion, the desire for freedom and new impressions were “the mightiest sources of inspiration” of Pushkin’s art. Many of his works contain reflections about Russia and its history, past and present. The poet saw the real Russia — the vast Russian Empire, the habitat of many ethnic groups, each with their distinct cultural traditions and customs. The offspring of an old noble family and a true citizen of Russia, Pushkin believed it was his duty to acquaint himself with the ways of life of different social classes within the ethnic groups that populated the country. The rich collection of the Pushkin Museum, numbering more than 200,000 items, affords an opportunity not only to showcase “Pushkin’s places” but also to create a wide panorama of the Russian Empire of the end of the 18th and the first half of the 19th centuries.

Occupying three rooms in the museum and showing more than 1,000 exhibits, the exhibition presented an impressive exploration of life in Russia in the first half of the 19th century, both in the capital cities — Moscow and St. Petersburg — and in the hinterlands, on the estates of the gentry, and in villages and remote provinces. Taken together, maps of the Russian provinces executed by 19th-century painters and engravers, oil paintings, watercolour pieces, and engravings recreated the architectural and historical appearance of the Russian Empire: Moscow, St. Petersburg, Tver, Kazan, Tiflis, Kiev, Pskov, Tobolsk, the TransCaucasian region, the Volga region, the Urals, the Don, and the Baltic provinces.

The exhibits — from priceless documents to artefacts of the everyday life of the period — weave a convincing narrative focused on the economy and culture of the nation at that time, the tenor and special features of life of the ordinary folk, the Russian army, the educational system and many other things that formed the backbone of the Russian state from the period of Paul I to the reign of Alexander II.

The geographic diversity of Russia was encapsulated in several separate narratives highlighting the life of different social groups among the Russian people.

The central room featured a display dedicated to the Russian nobility, whose present and past destinies the poet often thought about: “What is nobility? The hereditary upper caste of a people, that is a caste rewarded with more privileges with respect to property and personal freedom. Rewarded by whom? By the people or their representatives. To what end? To have powerful protectors or immediate advocates close to the authorities. What kind of people constitute this caste? People who have time to occupy themselves with other people’s affairs. Who are these people? People of great wealth or people leading a great way of life. <.> What does nobility learn? Independence, courage, dignity (honour in general). Aren’t these qualities inborn? They are; but a particular way of life can develop and reinforce them — or wreck them.”

Reflection on the historical importance of the nobility is a common thread in Pushkin’s literary oeuvre as well as his letters and criticism (“My Genealogy”, “My Hero’s Genealogy”, “Novel in Letters”, “Draft Preface to ‘Boris Godunov’”, “An attempt to reply to some non-literary accusations” and others). Although Pushkin believed that “good society can exist outside the highest circles, everywhere, in fact, where honest, intelligent and educated people are to be found”, he was proud of his noble pedigree of 600 years and treasured the memory of his illustrious ancestors.

In the words of one of Pushkin’s heroes, “the occupation of a landowner is also a service. To manage 3,000 serfs, whose welfare depends entirely on us, is more important than to command a platoon or to copy diplomatic dispatches. ” For this reason the section focused on the world of Russian country estates became the centre of the exhibition. Although quite a few among the provincial gentry were the likes of “Mrs. Prostakova” or “Mr. Skotinin” (such surnames, drawing on Russian-language roots which suggest extreme simplicity, were popular in Russian literature from the time of the 18th century writer Denis Fonvizin, and satirize the crude attitudes of the uneducated country gentry, whose way of life and behaviour was in no way aristocratic), and the everyday life of some families belonging to the ruling class did not differ much from that of their serfs, the culture of Russian country estates produced great landmarks in the domain of architecture and park design.

The exhibition included views of the estates of the Russian aristocracy: Nadezhdino, a former property of the princely family of Kurakin; Gruzino, which belonged to Count Arakcheev; Ostafievo, the seat of the Vyazemsky-Sheremetev family; and others, as well as portraits of noblemen, documents relating to their economic activities, books, household objects, and items of interior decor, all affording insights into the world of the Russian nobility. As Pushkin wrote: “The gentry’s family traditions should be the nation’s historical heritage”.

The sections devoted to the life of other social groups of the time — the clergy, merchants, artisans, the nascent working class and of course the peasantry — were notably different.

The famous series of lithographs by Karl Beggrov and Ignaty Shchedrovsky featured tradeswomen, artisans, cabmen, cobblers and the like. Along with pictures and paintings, the display included peasant household objects, and peculiarly amusing and funny advertisements selling furniture, jewellery, tea and so forth. The apparently diverse exhibits (a set of china from the Popov factory, peasant’s spinning wheels, or embroidered linen towels) arranged into thematic sections together recreated the inimitable physiognomy of the age.

Geographic maps and atlases of the Russian Empire under Catherine II and at the start of the 19th century featured prominently. The items displayed included a collection of maps of mail carrier routes across Russia featuring a statement that humankind has not contrived yet a vehicle more comfortable and simple than a dray; a pocket-size atlas, and a famous album by Durand and Raffe “Journey Across Russia, with Paintings of Archaeological Landmarks, Undertaken in 1839”, numerous travel writings, and travel guides published in Russia and Europe.

“From the Western Seas to the Very Gates of the East. Russia at the Time of Pushkin” provided a panoramic overview of the Russian Empire such as it was in the first half of the 19th century, stretching over an area of 18 million square kilometers across Eastern Europe, Asia (Siberia and the Caucasus), Northern America (Alaska) and home to more than 70 million people.

The Pushkin Museum plans to tour the exhibition around provincial museums across Russia. 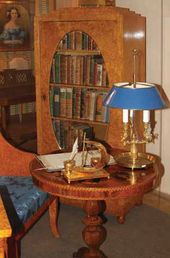 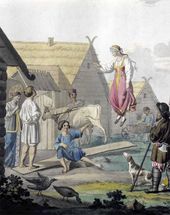 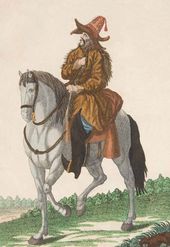 A Kyrgyz Cossack. 1776
Illustration from Johann Gottlieb Georgi’s book "Description of All Ethnic Groups of the Russian State” 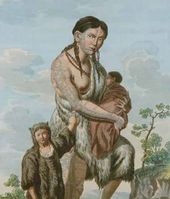 A Chukotka Woman. 1815
Illustration from the album “Ethnic Groups of Russia”, Paris