The future quest of young artists can be best understood by looking into the realities of the last decade of the 20th century, a period which was a dividing point marking a transition to new ideological reference points. Destructiveness, this feature of the time when a certain tide “turned”, tore apart creative minds and threw individual and collective aspirations into disarray.

Receiving injections of apocalyptic ideas, in an unstable social environment artists drifted to individual, taste-based preferences: the new artistic generation felt thrust into a whirlwind of annihilated values. Artistic activities, meanwhile, did not cease, nor did the hardships caused by social shifts end up as a historical stalemate. The march of history emphasized the idea of creativity, which became for the artist a lifebuoy in the ocean of competing ideas. The tentative vector of hope was set by ideas relating to changes in social psychology and towards a replacement of protest with the efforts to work out a creative, integrative base.

This process of building-up acquired a quality of historical stability because priorities were to be established. Comprehensiveness is the feature of today. The components of the reserve stock of intelligence, as it turned out, had no alternative. Creative drive requires from artists an individual choice, in this case, the meaning of professionalism reaching beyond the boundaries of the traditional notion of acquired knowledge. The goal of purging creative work from moral relativism, commercial considerations and narrow-minded pragmatism becomes a certain positive professional principle for the young artists to whom it falls to grapple with the challenges of the time.

Speaking about psychological patterns regularly observed while the new generation’s character is taking shape, one should point to personal talents and reliance on the authority of influential artists as important features in the evolution of an artistic personality. However, the occupation of an artist has yet another modifier, that related to the prestige of the chosen pursuit. As is well known, the occupation of the artist has been degraded over time. Society seems to be content to have but a handful of such figures around — rather than enjoy diverse talents, it tends to rely on two or three iconic personalities. If we keep in mind that society “imposed restrictions” on itself at an age when entrepreneurship (the spirit of which is alien to artists) was the catchword, the marginalization of artistic pursuit could not but leave a mark on the self-esteem of young personalities.

This predicament often prevents young artists from becoming aware of their connection with the new times. Today the observer notices the strengthening of individual motivation in artistic occupation and the growth of purely creative ambitions. That last factor is important, for creative ambitions are among those forces that play off against ubiquitous commercialization. From one exhibition to another, artistic individualities are becoming more distinctive.

It would be wrong to say that all knots have been unraveled — there are still problems to be addressed. They lie mostly in attempts to impart a profound meaning to an artistic statement and to stylistically shape discoveries in form. The age of purposeful mass reproduction of artistic traditions is over. If we are to look at the young artists’ creative quest as a reflection of the social environment, contemporary appraisals of an exhibition of young artists ought not to be founded on the narrow criteria of professional competency. The total review of individual displays of the new indicators of quality is bound to have an impact on the up-to-dateness of the young artists’ exhibitions.

Some noteworthy debuts from time to time inspired hope that present-day begin ning artists would take their art to a higher level of quality comparable to that witnessed at the illustrious shows of young artists from the 1950s to the 1970s. But the newly minted “celebrities” were in no hurry to channel their efforts toward enhancing the community’s image — for them, a young artist’s show was a mere launchpad for their careers (to be followed by admission to the Artists’ Union, and further participation in group shows).

Perhaps such attitudes have not negatively affected the art of individual artists, although there is a good reason to think that they have affected the process of the shaping of an adequate professional milieu, the lack of which young artists’ shows are now intended to compensate. Whatever the case, these shows yet have to gain a reputation as well-tuned reflectors of social attitudes. Often such shows continue to be perceived as display of college coursework; to my mind this is understandable, for the young artists’ exhibitions do not feature works that “stir your soul”.

This situation provokes nostalgia for the time when the display of a young artist’s work became an important event for the professional milieu. In the 20th century, the best debut pieces by young artists went down in the history of Russian art. This happened because the young eagerly assumed responsibility for freedom of selfexpression, and here they were up to the challenge; their self-expression demonstrated more than just the individual’s talent — it reflected the public mind: the inner need of the talent sufficed to have the sacred words uttered without “contravening one’s nature”.

The success of such shows was associated with hopes for wholesome changes. Today we have no such “structure of expectations” in place. Our conflict-ridden age is not conducive to the treatment of the beginners’ shows as an independent start. Hence there is only one conclusion: the generation’s position ought to be made clear, and their statement ought to be heard. The artist needs this; society needs this just as much as (and even more than) the artist.

So what is it that stands in their way to success? The answer lies within the context of budding art trends. The creative activity we have mentioned, while drawing attention with its diversity of talents, leaves an ambiguous impression. What is behind the inconsistencies? The artists’ formal vocabulary is replete with underdeveloped ideas. The treatment lacks concentrated will power. The exertion to find form paradoxically betrays an inner struggle marked by a combination of lack of confidence and the vague desire to work a miracle...

The creative process starts with simple things such as the artist’s choice of subject, or rather, the emotional involvement that normally accompanies the creation of unconventional imagery. The genres of artwork engaging the viewers’ attention range from figurative narratives to pure abstraction. The sentiments of a young artist who draws on cultural heritage with a special reverence are often illusory. Similarity of images accomplished in different styles, although paradoxical in our opinion, is the result of predominance of a purely technical, formal approach.

The artist’s choice of a figurative vocabulary is an arduous road to knowledge. Building up the paradigm of an image is a task which must be tackled exclusively on one’s own and which requires the capability for liberal creative interpretations. At the 30th exhibition of young artists in Moscow, at the New Manezh, Yegor Plotnikov in his picture “An Old Square” offers an interesting take on this concept: the historical and modern visages of the city have merged to form a whole. Maria Sharova in her painting “A Swing” brings out the metaphorical essence of the image through unity of space and colour, on the one hand, and rhythm and structure, on the other. Tatiana Chursina’s “Wind” is marked by intense compositional style: the expressiveness of the figures emphasized by a monochrome palette enhances the vitality of the painting. Meanwhile, Dmitry Okruzhnov’s picture “Butcher” features a gloomily gaping vacuum where two substances, two “figures” — a man and an animal’s crucified carcass — collide. The tragic meaning of this duel reaches beyond the narrative. The colour contrasts are expressive. Time is projected onto the symbolism of red and black. The “metaphorical essence” conveys a certain social and psychological characterization.

Decorative trends merit special attention. Achievements in this field make one recognize the emotional dominance of the figural vocabulary, which, in conjunction with a metaphorical imagery, presents a natural environment for a quest for a form. The list of the young artists’ creative choices would not be complete without mentioning a reversion to a grotesque and primitivist style.

There is no denying that such an imagery bespeaks deeply-held social and moral beliefs, which are marked either by a gently ironic attitude to the subject, or by the observer’s critical approach. It should be noted that whenever the artist aspires to a generalized narrative, he or she should confer on the work a certain monumentality — the artistic statement lacks weight without it. In Dmitry Samodin’s painting “Summer” a cow from a village soaring in the sky fits in extraordinarily well with the setting consisting of exuberant vegetation in full bloom. A genuine joy of life suffuses this world, which seems to be newly created. Victoria Nikiforova in her “Toy War” depicts, with childlike naivety, the pose of a “killed” paper soldier; the tragedy of the fragility of a human life is conveyed through the broken angular lines and crepuscular glimmer of colours.

The problem of the force of the creative impulse lies in the angle of approaching the subject chosen by the artist, and the build-up of stylistic culmination in which the expressiveness of technique provokes a comprehensive generalization. This conclusion applies also to such non-traditional forms of visual art such as photography. In Maxim Glukhov’s series “101st Kilometer” the objectification of the artist’s vantage point is conditioned by the portraitist’s task per se. The culmination is achieved by lining up the human figures in a socially defective array.

Such a special form of “photo documentation” possesses a certain quality of historical veracity, filled up from inside with a sharp emotional judgment which obliterates the artist’s supposed distance from his subject. The principle of cut-and-paste painting, derived from the modern culture of clip making, also serves to produce the effect of capturing objects. Maria Suvorova’s three-part “Kremlin Secrets” is pivoted around ironic approach, styled in contemporary formal social themes derived from a paradoxical juxtaposition of the shielded, rigid citadel of state power and revelations culled from modern glamour magazines.

The versatility of the creative quest shows that exhibitions of young artists are gaining individuality at a surprising pace. Certain difficulties arise along the way because the artist is besieged with aggressive incompetency — the result of the loss of traditions of Russian national art and the decline of craftsmanship. Current debates over what is truly valuable are won by art addressing reality. A purely didactic response, free from social overtones to the classical base is hardly productive. Truth is on the side of those who have fine skills of exploring the depths of the times with imagery. There is undoubtedly a need of such exploration. 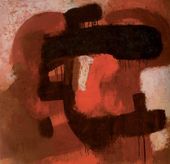 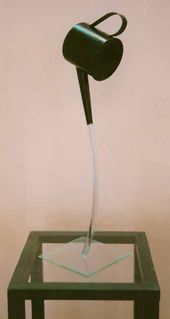 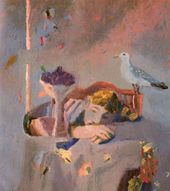 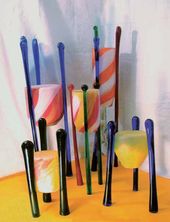 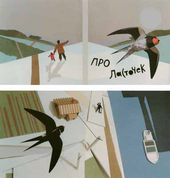 Ivan АLEXANDROV. Text and illustrations by the artist “About Swallows”. 2008 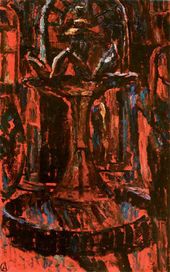